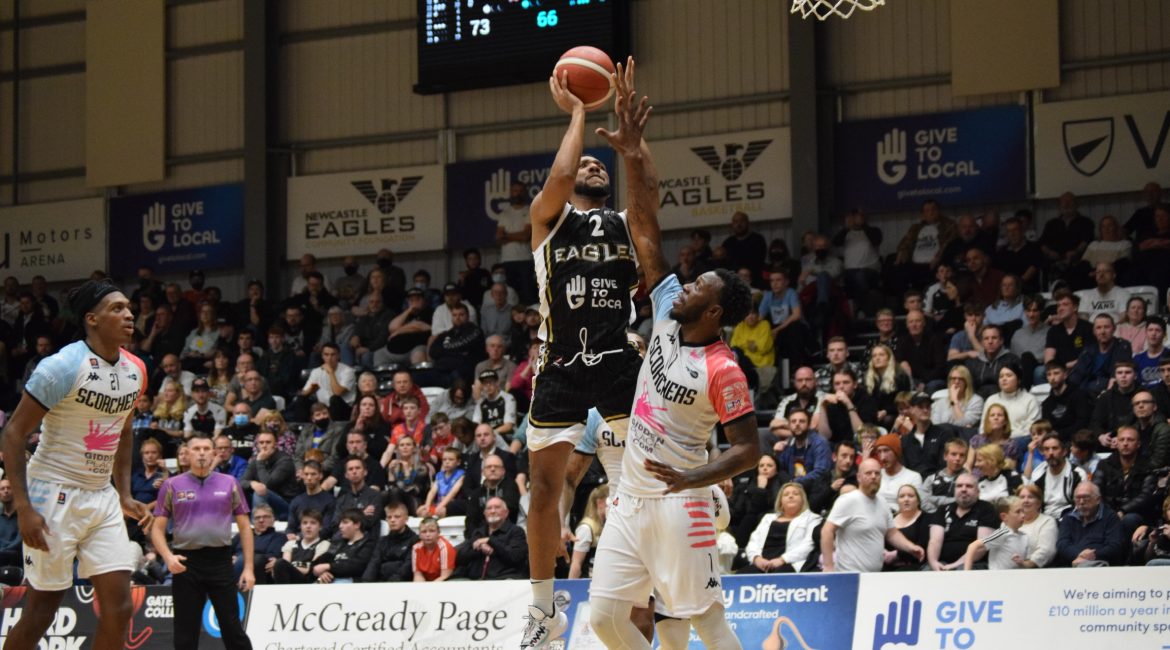 It’s the British Basketball League’s bottom of the league side Surrey Scorchers that roll into the Vertu Motors Arena tonight for a Championship match-up. Back in early November last year Surrey came to Newcastle and the Eagles prevailed 90 – 81.

More of the same will be the aim for an Eagles side that is still searching for an identity and consistency deep into the season. They come into this game on the back of a difficult night last weekend down in Sheffield when they lost to The Sharks.

Shooting Guard Wes Person Jr. led the Eagles in scoring in that game with 21 points a kick above his season average 14 points a game. He felt it was a game that his side was in for lengthy periods but ran out of steam in the later stages.

“It was disappointing to go into the game under-manned with only six or seven guys available due to injuries. I think we played really hard but just ran out of gas in the fourth quarter. It was a physical game and they were a lot fresher at the right time for them and they pulled away.”

“We definitely had some positives that we could take from that game but we need more bodies in and we should have that for tonight and be able to fight for the entirety of the game.”

Person Jr. mention additional bodies and there’s great anticipation on for tonight’s game with the return to the Eagles fold of Justin Gordon a stand-out performer for Newcastle last season. His new teammate is looking forward to playing with Gordon after practising with him this week.

Gordon has come into replace popular forward Duke Shelton who suffered a season-ending injury last week in training and was unable to play against Sheffield. The Eagles moved quickly to bring Gordon back after his release from Hungary and hope he can hit the ground running.

“Justin is a really good player and I feel he’s going to help us in a variety of different ways. Scoring the basketball and defending, he gives us another athletic presence. He’ll help us play in transition a lot more and make us better in that aspect.”

“He’s definitely going to help us a lot inside and give us some rebounding which hurt us in the last game. Brandon (Peel) and Darius (Defoe) did a good job for us but Justin can play the ‘4’ for us and give us a bit more in that position and increase our rotations.”

Exchanging a big inside centre like Shelton with a more athletic all-round player like Gordon may mean the Eagles having to switch things around.

“I think it will change us a little bit more. Duke was more of a ‘5’ where Justin is a hybrid ‘3/4’ and he can step out and has outside skills as well. We’ll definitely run some different sets to utilise Justin’s skill set.”

“I think though it should be an easy adjustment with him being accustomed to the league and playing with the likes of Fletch and Darius last season. I think it should help us try to find a win. Surrey are no pushovers despite the season they’re having.”

“They have some dangerous players that can hurt us if we don’t take care of business. Definitely inside with bigs like Robertin and Jamison who are big time rebounders and keeping them off the glass is one of our key issues.”

“Then there guards Hamrick and Davis Jr are downhill guys that we have to keep out of the paint. But it’s about us taking care of business defensively and hopefully finding our rhythm offensively and then we’ll be fine.”

Person Jr feels his own game is coming together, 43% from 3-pt range, and his scoring is going up.

“I’m never satisfied as I always feel there’s stuff I can add and do better. But over the last few games I’ve shot it a little bit better and more consistently. For me it’s about keying in defensively. Finding ways, I can be disruptive, help us on the defensive end and push our transition.”

Certainly, as ever, defence is key to Newcastle getting back into winning ways and with Person scoring freely and Gordon back in ‘The Nest’ there’s an optimistic feel to tonight’s game.

Limited tickets for this set to sell out game are still available from the box office.