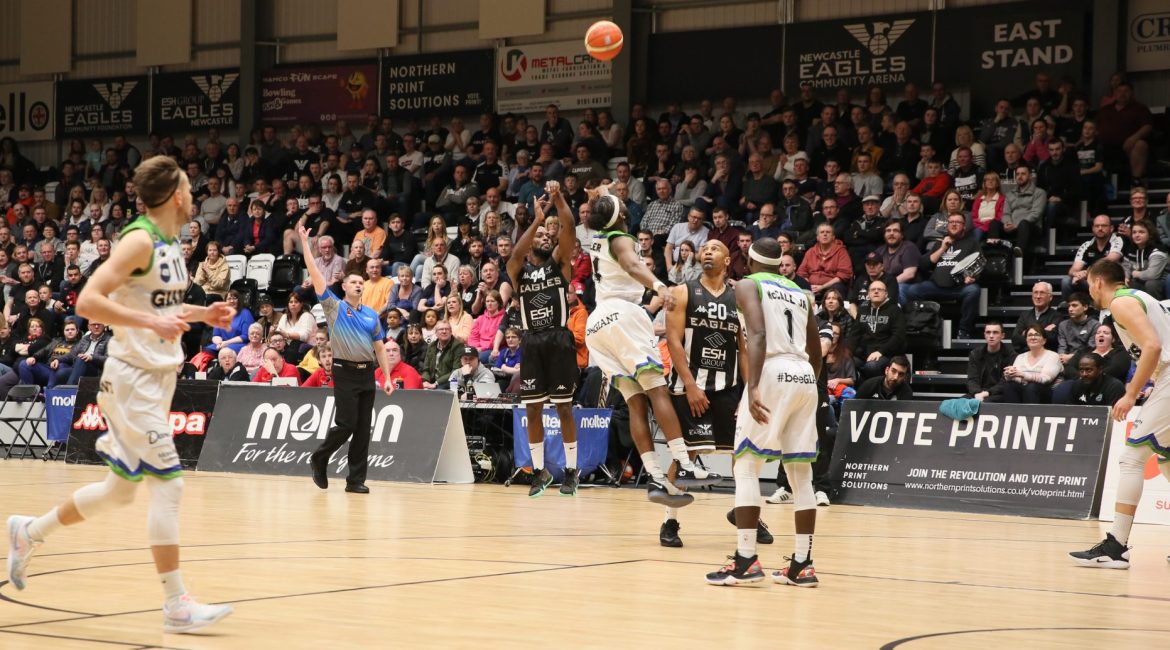 Esh Group Eagles Newcastle go in to tonight’s BBL Championship looking to bounce back from defeat at Champions-elect London last Saturday against Sheffield Sharks at The Eagles Community Arena. A win would lock them in to a top-four finish and mean they can finish no lower than third.

Their on-court general Rahmon Fletcher is well aware that it’s almost play-off time and what he needs to do to help his team. The mercurial point guard was philosophical about last Sunday but is looking forward to tonight’s game.

“They had a plan and really jumped on us early. It was tough because they have a well-balanced team and all know their roles. Brandon Peel is their equaliser that moves them from guard play to forwards and having Kervin Bristol down there makes them really hard to play against. Plus, Ladarius Tabb went off.”

“We needed to be at full-force especially on the road to compete and losing Vic (Moses) early and Darius (Defoe) not being fully fit didn’t help. We played hard but it wasn’t enough but it is what it is and we have to move on.”

That move brings Sheffield to town tonight and they are looking to consolidate their own play-off place as well as pick up the season head-to-head against the Eagles have=in beaten them at home in December last year.

“It’s going to be touch and go as to whether Darius and Vic can play. Right now, it’s going to be a spur of the moment thing and it may depend on how they feel when they turn up. We have to balance what we need tonight with what we may need later on in the month.”

“I know we need one win to clinch third place and could still finish second but honestly I don’t think it makes much difference whether you finish second or third. I just want to make sure I’m in a good rhythm with everyone that’s what’s important at this time of the year.”

There’s no doubt that Fletcher and his team-mates if all fully fit and firing are a match for anyone in The BBL as they were in the Point Guards own words “rolling” before last Sunday and are looking to get back on that track tonight.

In front of them is a Sheffield side that will work hard and make things tough and whilst Fletcher respects all their players he’s well aware of what the keys to the game are. Chris Alexander and Dirk Williams are undoubtedly the dangermen and the ones that Newcastle need to key-in on.

“They’re the type of team that once they get going and once, they hit a couple of shots they can be really, really tough to defend. They run this open offence which has so many options but Alexander and Williams are the top two keys but you can’t forget about (Mike) Tuck and (Rob) Marsden as well.”

“It’s really all abut the way we defend which is the train we’ve been talking about in the second half of the season. Once we get our defence established it helps us on offence. We’ve kind of started the last couple of games slow and the other teams seemed to be playing harder.”

“Don’t get me wrong we’re playing hard but we just need to get it up a notch earlier and you can see when that switch kind of happens the difference it makes. We just need to try and get that going a bit early and make it our staple for the rest of the season and the play-offs.”

“That’s what we’re always talking about. We’re back at home where everyone wants to play. It eliminates the bus travel; you can sleep in your own bed and you’re playing with your own fans. You know they give you that extra motivation as well.”

“They’re always great and have been even better since we arrived in our new home. Let’s hope we can all work together and use their energy to boost ours and get that win we want and need.”

Tip-off at the Eagles Community Arena is at the usual time of 7:30pm and tickets are still available online or on the door: