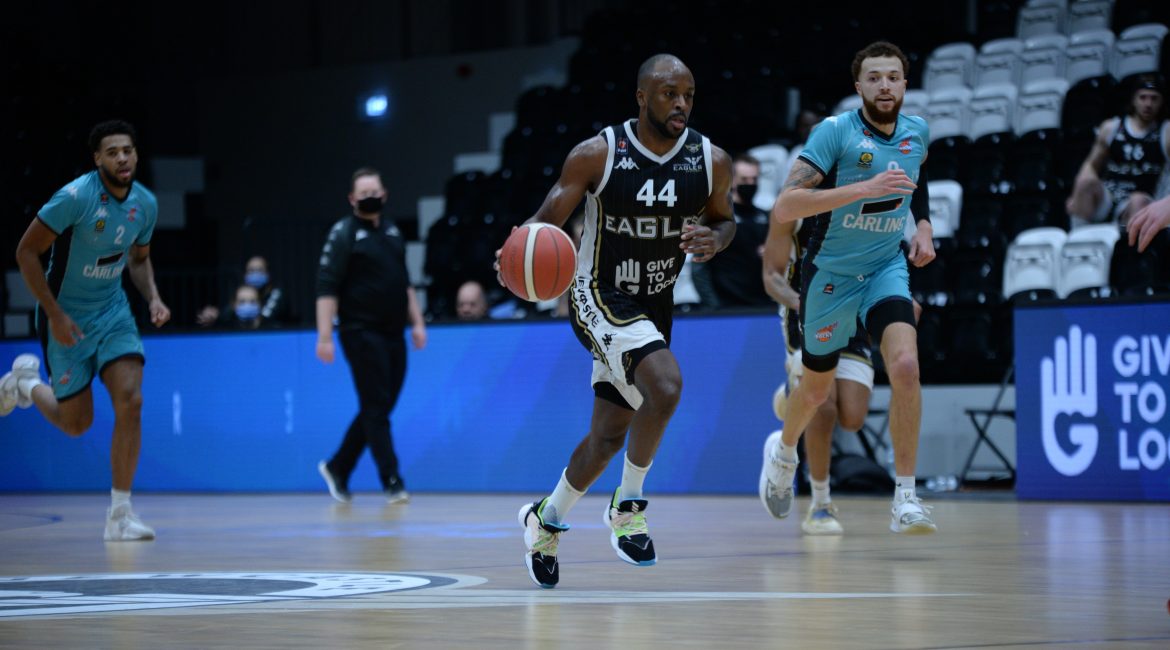 Newcastle Eagles reset button certainly got turned off last Sunday down in Surrey when they fell victim to the Scorchers by 87 – 67. It ended a great run of three wins in a row which ironically followed the previous loss down at Surrey.

For Eagles Captain and mercurial on-court general Rahmon Fletcher it was a disappointing day. He reflected on that loss as he looks to drive his team back to winning ways tonight at the Vertu Motors Arena against Manchester Giants.

“We took a step back on Sunday and it’s always disappointing when we lose. We did some really good things in the game but we did more bad things which resulted in a loss. But its only one loss and we just had to go back to the drawing board and get ready for tonight’s game.”

“I think it was our intent that was the key to that loss. I don’t think it was anything tactical that we should have worked on or X’s and O’s, just our approach to the game. If you go back to the games we won we established our dominance from the tip.”

“On Sunday we all thought we got caught on our backflip where we were playing catch up from the beginning. Once you do that in this league especially against teams that are trying to make a play-off push and be a better version of themselves you just can’t afford too no matter who you’re playing.”

“We had a bit of it against Glasgow and we fought back but on Sunday we just got on the back foot and behind a little bit more than we should have and couldn’t pull it back.”

With a solid week of intensive practice behind them and refocusing Fletcher feels they should be ready for a tough game against The Giants.

“We’ve talked about how we should approach the game. Even though it’s April sometimes you have to go back to the basics and what made you successful. We’ve switched up some things and we’ve watched some video of ourselves which is important.”

“If you don’t watch yourselves then what’s the point of talking about it and trying to prove it. The biggest thing is getting back to what got us those three wins before Sunday and what has made us pretty successful this season.”

“We’ve been top three all season. It’s not like we’ve dropped all the way to the bottom. We won The Cup and were within two games of making The Trophy Final. We were also until recently in a position to fight for the league title as well.”

“It’s not like we’re down and out or not going to make the play-offs or we can’t make a run in the play-offs. We just have to remind ourselves who we are.”

The Eagles did beat Manchester 101 – 76 on the road the last time they faced them back in early March but The Giants are a team that are also still in the play-off hunt and looking for a win.

“It’s going to be a tough game. They still have plenty to play for and have a new Coach to impress. They have some really talented players. Justin Satchell had 36 points in their last game which was a close loss to Leicester and that’s what he’s very capable of.”

“They have Sam Cassell who is a good floor general, Donovan Johnson who is really good and Jordan Whelan a BBL veteran. So, it’s not one of those games where you can look past them and start thinking about Leicester in a week’s time.”

“We’re not in a position where we can afford to look too far ahead. We’ve got make every game, every week, every weekend our season so tonight is our season. You can’t play the next game if you don’t take care of the game in front of you.”

There’s no doubting the talent in this Newcastle side and that they are one of the leading sides in the league. It’s about proving that on a consistent intensive basis.

Tonight’s game will be live on the BBL Player with coverage from 5:50pm and tip-off at 6pm.