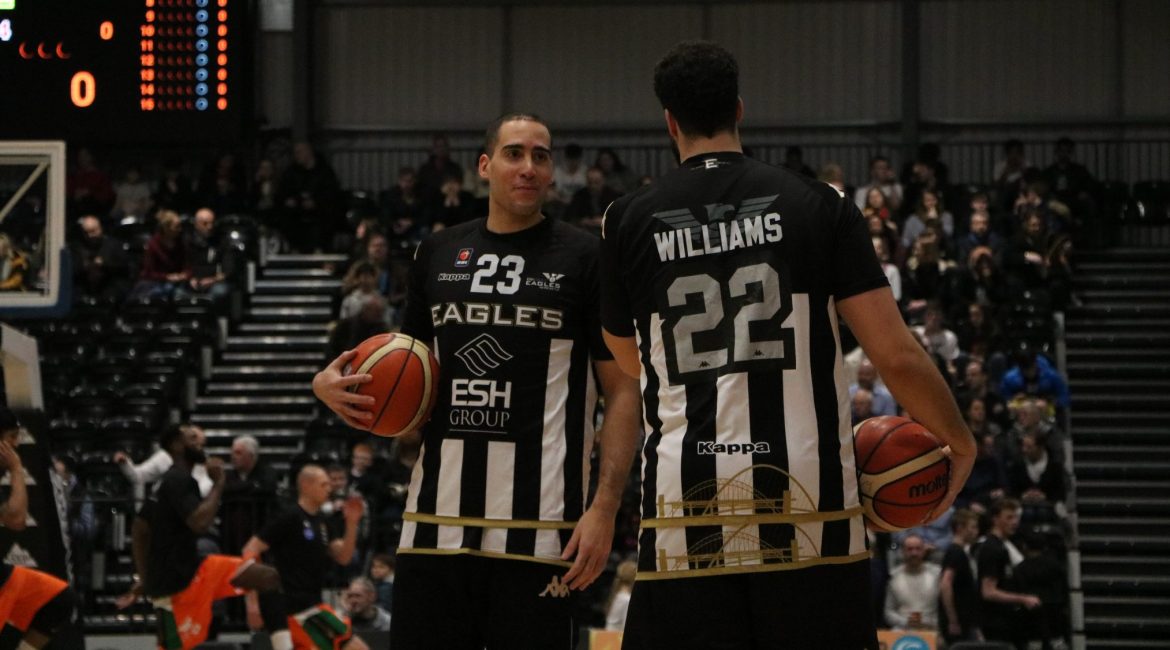 Tonight, Esh Group Eagles Newcastle take to the court in their shiny new Eagles Community Arena looking to christen the building with their first win and more importantly go through to the Semi-Finals of The BBL Trophy as they face the Manchester Giants.

The Eagles who lost on opening night last Friday against Plymouth could be excused that loss in some ways as the occasion was always going to be greater than the game. That is definitely not the case tonight as they and their loyal fans will be looking for a win in what will be a tough game.

With doubts over top-scorer Victor Moses, the rest of the roster may well have to step up if the power forward is ruled out. It is something that they managed to do last weekend down in Surrey when they won a thriller in overtime to bounce back from Friday’s defeat.

Instrumental in that win at Surrey was small forward Kai Williams who showed a return to scoring form with 17 big points and he’s hoping for more of the same tonight as he assessed the tough task ahead.

“Individually there was nothing really different from me on Sunday in terms of approach. My role this year hasn’t really been a huge offensive focus as we have Victor, Fletch, Jeremy, Darius and Kyle who are our main scorers.”

“Not everyone can be expected to score as much as those guys night in and night out. I honestly just think with Victor being down we played a little bit different from usual and the ball just found me and I was able to make some shots particularly early.”

“It was a great win in the end. Surrey has always been one of those tough places to play in the league as they always seem to play well at home and like most BBL teams they maximise that advantage. We knew it was going to be tough as we were running a limited rotation but credit to all the guys for stepping up when needed.”

“As far tonight is concerned we feel that every game we go in to if we play the way we’re supposed to play and not allow anyone to dictate to us and play our own brand of basketball we feel we can win. We’re looking forward to getting out there again and getting our first win in our new arena.”

“But that’s easier said than done. Right now, Manchester are one of the hottest teams in The BBL. They are playing really well and have a group of guys that are playing well together and are a tight knit. So, it’s going to be a tough game but we’re definitely looking forward to it and looking forward to the atmosphere.”

That atmosphere at last week’s opener is what a lot of the players and fans have talked about this week and Williams feels it can make a difference.

“It was absolutely amazing and so loud playing in the arena last week. Seeing the arena when we got to practice in it before the game gave us the impression that the atmosphere was going to be special. Once everything was set-up it reminded me a lot of the Belgian gyms where the fans are right on top of you.”

“A venue like we now have is something that can honestly create an even bigger home advantage for us than Newcastle has had in the previous years. It was always a tough trip because Newcastle have always been talented, the journey is long and you have to play against a really loud crowd.”

“I think the fans are really amazing. I’ve played in a few places in The BBL and had great crowd support but I genuinely think that the Eagles faithful supporters are second to none and I think that having this venue and it’s set-up is going to raise the intensity of any game and we have to match that.”

Tip-Off at the Eagles Community Arena is at the usual time of 7:30pm.