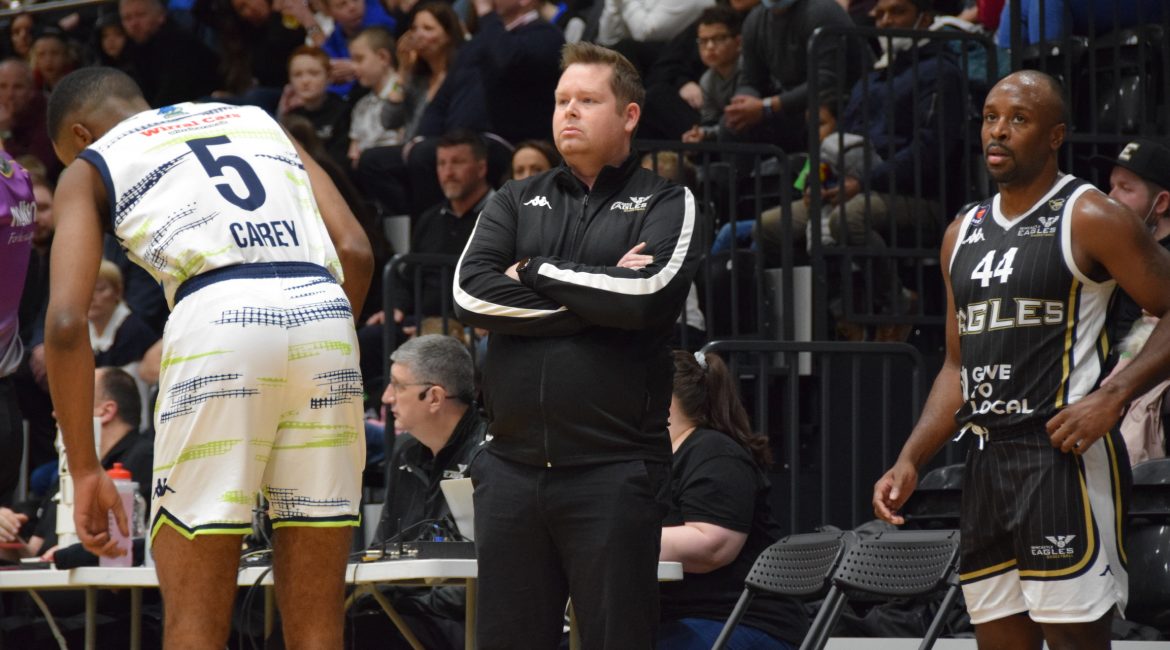 Earlier this season in the BBL Cup the Newcastle Eagles lost five games in a row for the first time since January/February of 2000.

A loss tonight in the crucial BBL Trophy clash against London Lions at the Vertu Motors Arena would mean a second losing stretch of five games.

That is something that Head Coach Ian MacLeod and his team will want to avoid as well as looking to progress in a competition that has been kind to them over the years. Indeed, in what was the last game of Coach MacLeod’s rookie season in 2019/20 the Eagles lifted the Trophy.

A win tonight could well open a pathway for another successful run in the competition particularly with Bristol Flyers beating Leicester Riders last weekend at the same stage of the competition.

The Eagles haven’t played since a tough road loss at BBL Cup Finalists Manchester Giants 88 – 82 when they put in a good performance and were in the game for long periods. But, ultimately it was a loss as Macleod explained.

“It was an improved performance for sure, against an in-form team. Second chance points (their 15 to our 2) was the game essentially. We started well and were in with a chance to win the game right to the end. But wins is what we need”

“Whether it’s a 4th loss in a row or 4th win in a row, this is Newcastle Eagles, it is all about winning the next game.”

Eagles were short-handed at Manchester. Already missing Daniel Johnson-Thompson through a season-ending injury, Louis Sayers picked up a foot fracture in the previous game against Cheshire and could be out for up to two months. Macleod is philosophical about that.

“Right now, we are what we are and we are challenging ourselves to step up and be counted. We can be better and that is the focus.”

The Trophy, as previously mentioned, is historically a competition Eagles have done well in so it’s a very big game tonight and a real chance for Newcastle to make a bid for silverware if they can get past London.

“It was the first trophy I won as head coach. But that will be irrelevant on Friday. It won’t count for anything with either teams game plans. We must be careful not to simply point to the past as a reason to be successful in the present. We will get what we take.”

Lions come into Newcastle after a tough loss in the FIBA Europe Cup in Denmark against Bakken Bears on Wednesday and a surprise defeat at Surrey on New Years’ Day but will also see this as a chance to go for silverware and are a tough team to play against.

“With the money they have invested they will be thinking of winning every game and every competition they play in. This is an expectation that has been placed on clubs such as ours for years, which they are now also experiencing. I don’t think either team will be looking past Friday night though.”

The last time the two sides met was in early December at The Vertu Motors Arena in the BBL Championship when Newcastle put in an excellent display to take a convincing home win. More of the same is what Macleod is hoping for.

“There’s no doubt it was our best performance of the season. The key will be defensive intensity accompanied by quick and flowing offence. We have shown we can play well; we must now do it consistently.”

Tip-Off at the Vertu Motors Arena is at the usual time of 7:30pm and tickets are still available on the box office.