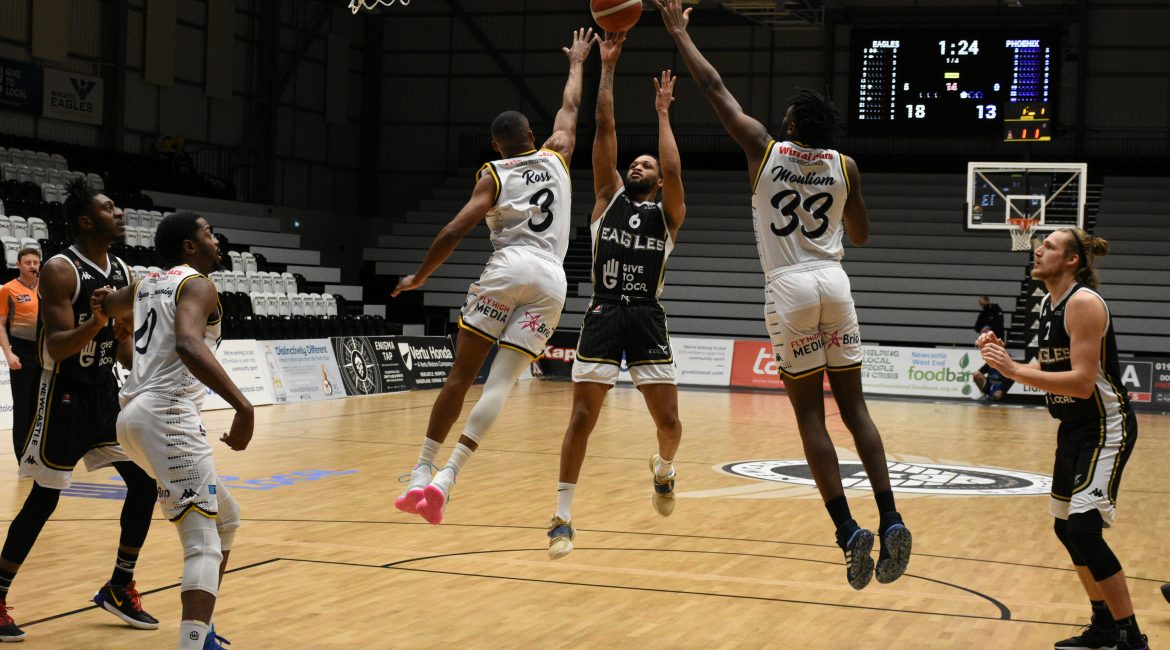 Newcastle Eagles go into tonight’s crucial top of the table clash with league leaders Leicester Riders at the newly named Vertu Motors Arena in good heart and looking to open up the title race.

The Eagles got back to winning ways with an emphatic 101 – 76 road win at Manchester Giants last Sunday and whilst it was a great all-round team performance it was built on the back of one of the BBL’s most deadly duos, Rahmon Fletcher and Cortez Edwards.

The back court guard combination was in fine form throughout the 40 minutes putting up an impressive 43 points, 18 rebounds and 17 assists. Edwards’s share of 20, 11 and 5 seeing him selected to the BBL Team of the Week for the seventh time in what has been a stellar season.

It’s a pairing that has guided Newcastle well this season and Edwards reflected back on their and the team’s efforts in getting the win and looking forward to tonight’s game against Leicester.

“We wanted to play a full game on Sunday and win all four quarters which we did. We wanted to have a game where we dominated and played the full forty minutes as that’s something we haven’t always done this season.”

“We just tried to tighten up on some of the little things where we’ve been making a few mistakes in recent games plus when we got the big league we wanted to finish in a positive note which we haven’t always done.”

Referring to the combined performance from his back court partner and himself Edwards referred to how good defence was the key to that result.

“We found ourselves getting a lot of good stops and that gave us the opportunity to run. So, we just picked up the pace and once we got into the half court we took control of what was happening and making sure we got the shots we wanted.”

Not that Sunday was just all about the dynamic duo. The other three starters in Darius Defoe, Evan Maxwell and Rex Pflueger were also netted double figure scores as did Louis Sayers from the bench. The form of Pflueger and Sayers though particularly pleased Edwards.

“We’ve been trying to get Rex more aggressive and Louis has been pretty consistent all season. We got Rex more involved which was a good thing and he responded in the way we wanted him too.”

Leicester Rider though are a different proposition to Manchester and although they have dropped a couple of losses recently they still sit at the top of the league and are the team to beat.

Games like tonight’s are vitally important as both teams look to gain a significant advantage in the standings over one of their closest rivals. Edwards is aware of that and how tough the game will be.

“It’s a big game and one with huge Championship aspirations and one we need to win. The head to heads are really important. If we get a win then they get a loss and that’s a big deal. We’ve had a bit of a rough patch so getting this win would make up a lot of ground for us.”

“They’re going to bring their best effort so we need to exceed their energy and make them play our game. But it’s really about us and us playing defence. If we can lock in defensively that’ll allow us to do everything we need to do offensively.”

It’s sure to be a blockbuster of a game and one that the Vertu Motors Arena will showcase live in front of the Sky Sports cameras as both teams via for an important win from tip-off at 7:30pm.

Fans can watch live on Sky Sports Action with coverage starting from 7pm and the BBL Player from 7:20pm.