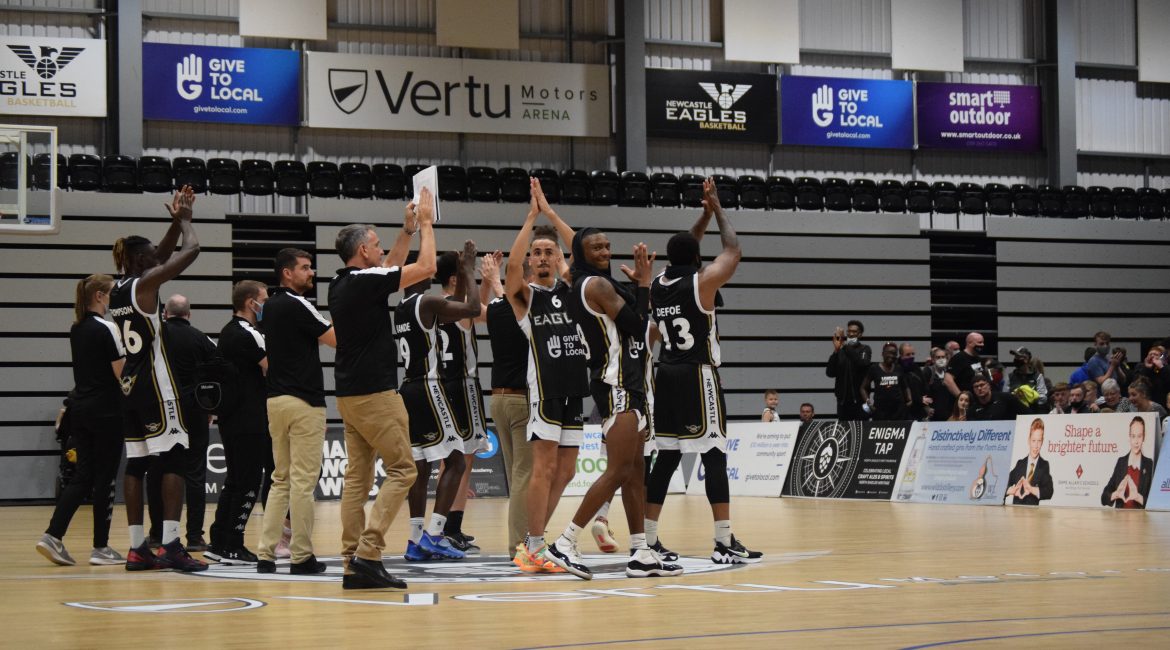 British basketball’s most successful player has warned Newcastle Eagles’ BBL rivals that his unrelenting quest for silverware is far from over.

Darius Defoe has bagged 27 medals in 17 seasons on Tyneside to eclipse allcomers as the most decorated star in the history of UK hoops.

And ahead of tonight’s BBL Cup opener against Glasgow Rocks, the veteran forward is in typically bullish mood.

“There was never any doubt in my mind that I’d be back for more this season,” said Defoe.

“I still have unfinished business in this league and people better believe it.

Tickets To Fly Away With Our Eagles This Weekend
October 6, 2021

“I’m still trying to get to the next level and win more trophies with Newcastle.

“As far as I’m concerned what I’ve won already in my career will never be enough.

“That might sound greedy. I know it does. But, believe me, you never get bored of another medal around your neck. How can you?

“I’m so proud to be a part of the most successful basketball club in Britain. Why would you want to walk away from that?”

Defoe accepts it will be business as usual for the men in black this season following last term’s trophy double.

But the man who’s seen it all on Tyneside, since signing as an unknown teenager in 2005, admitted he revelled in last season’s unfamiliar underdog role.

“I liked it,” added the 36-year-old. “For some reason nobody saw us as serious contenders last season and we were the underdogs for a while.

“Nobody was talking about us, nobody was watching us and we just kept our heads down and got on with our work.

“This season we’re there to be shot at. But that’s Newcastle Eagles. We’re used to being a target in the BBL.”

Remarkably Defoe remains in contention for a starting five spot against old foes the Rocks in what could be a sell-out return to top-flight hoops at the Vertu Motors Arena.

A summer spent working with a personal trainer means the face of Newcastle basketball is feeling fitter and hungrier than ever.

And he added: “My body feels great. I just can’t wait to get out there in front of our fans again.”

Head coach Ian MacLeod faces some difficult decisions ahead of tonight’s cup clash as he looks to integrate new faces into a new league — with minimal preparation time.

But the Geordie playcaller is picking from a fully fit roster and refuses to dwell on a disrupted pre-season.

“We’ve had four or five phases of practice depending on who’s been on court and who’s arrived in the country,” he said.

“It’s been a bit stop-start but I look at our roster now and we’ve done very, very well to do what we’ve done in terms of recruitment.

“We’re a well-built organisation and those foundations serve us well. We’ve never been a flash-in-the-pan club and we proved that again last season.

“Last season London threw money at chasing success and Plymouth did the same. We just did what we do best and came away with two trophies.

“That consistency and experience is where our strength lies. It’s the advantage we have over so many other teams.

“We’ve got every angle covered and this season we’ve got that perfect blend of experience and youth.

“I’m really happy with how the team’s come together in a short space of time and now we have one thing to focus on: winning this weekend’s game.

“Everything else that’s gone on is irrelevant.”

A limited number of tickets remain for tonight’s BBL Cup Group Stage game to purchase in advance online from the box office.