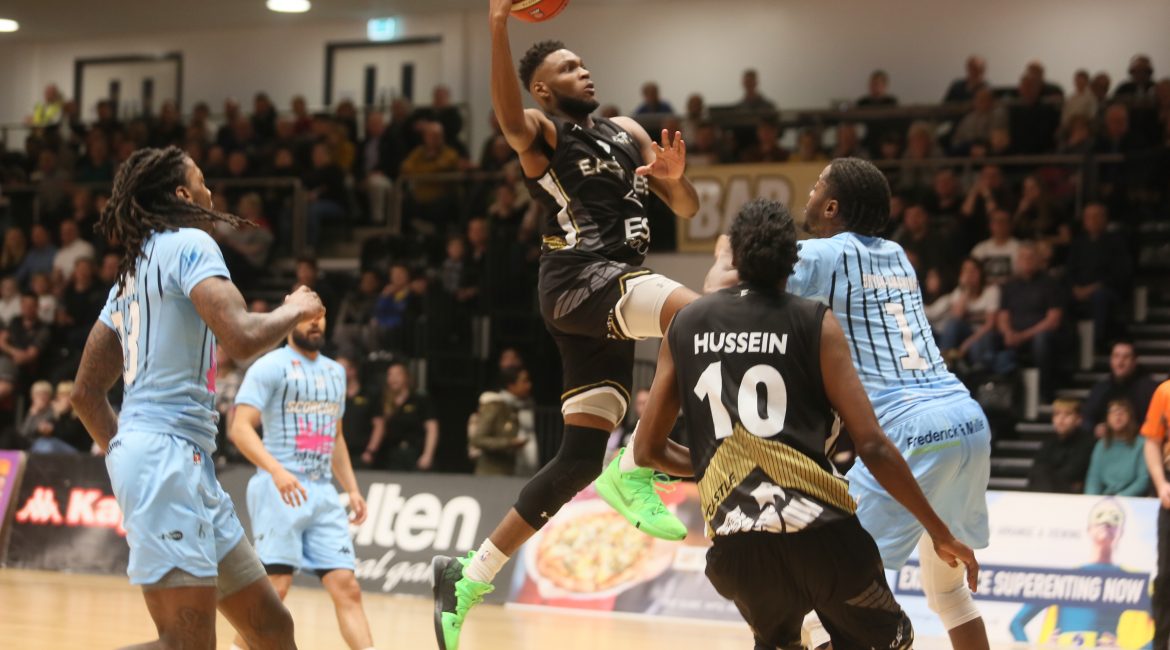 The Newcastle Eagles go into this afternoon’s BBL Trophy Semi-final second leg against Cheshire Phoenix buoyed by two factors in their favour.

Firstly, they have a nine-point advantage from the first leg down in Cheshire and secondly, they go into the game on the back of a great 91 – 78 BBL Championship home win over Surrey Scorchers less than 48 hours ago.

It was a game where the Eagles came back from an early 14-point deficit in the first half to completely shut-down and outshoot their opponents in the second twenty minutes. Cheshire themselves had a great come from behind win in Plymouth at the same time which all points to a blockbuster of a game at the ECA today.

The winners over the two legs will earn the right to take on EBL Division One side Solent Kestrels in The BBL Trophy in two weeks’ time at the Emirates Arena, Glasgow. Newcastle are desperate to get back to a Final and land more silverware for the starred franchise.

Despite having a nine-point lead from the first leg it will be a tough game for the Tynesiders. Phoenix came into Newcastle’s house in January in a Championship game in January and left with an 18-point away win showing how dangerous they can be.

Newcastle will also have to do without top scorer and rebounder C.J. Gettys as the big Centre has not yet recovered from an ankle injury sustained in the first encounter. He will be joined on the side lines by influential guards Drew Lasker and Eddie Matthew who are also out injured.

It means, much like Friday night, the Eagles shortened roster has to pick up the slack and one of those looking to do that is American Mike Morsell who top scored for his side against Surrey. The free-scoring Morsell picked up 22 points and 8 rebounds in that win and was a happy man afterwards.

“It was definitely a good game for the team. We came in wanting to bounce back from our last game against Leicester when we didn’t play to our standards. So, we just wanted to come out get back to that level and give the fans something to shout about.”

“Surrey surprised us in the first quarter as they ran some plays that they hadn’t run in previous games and I don’t think we were ready for it. But half-time Coach Mac(Leod) got us in and made some adjustments which really helped us out and enabled us to come back.”

“Our second half defensive performance was excellent as we held them to thirty points and really keyed into the adjustments we had to make and got the rewards for it.”

Eagles had been down by eight points at the half but a superb third quarter which they won 30 – 13 completely turned the game around and blew Scorchers away. Morsell was a big part of that quarter.

“Individually I thought I didn’t play to my standards in the last game and owed my team-mates one. I just focused in and the way the guys all supported me enabled me to have a big game.”

Morsell then turned his thoughts to the Cheshire match-up and what it means to the Eagles in by far their biggest and most important game of the season so far.

“It’s huge game and we’re going into it trying to win. We don’t want to leave any room for error. It’s a quick turnaround and we’ve got to forget this game tonight and concentrate on Sunday. You have to forget about the nine-point advantage and just go out and try to win the game.”

“You can’t go out and try and lose by a small margin as you don’t know what can happen and take any chances. Our mindset is to go in and win and leave no doubts. It would be huge to get to a final and have the chance to win a trophy. It’ll be big for the programme and we’re excited about that.”

The game this afternoon tips off at 5:00pm at The Eagles Community Arena: