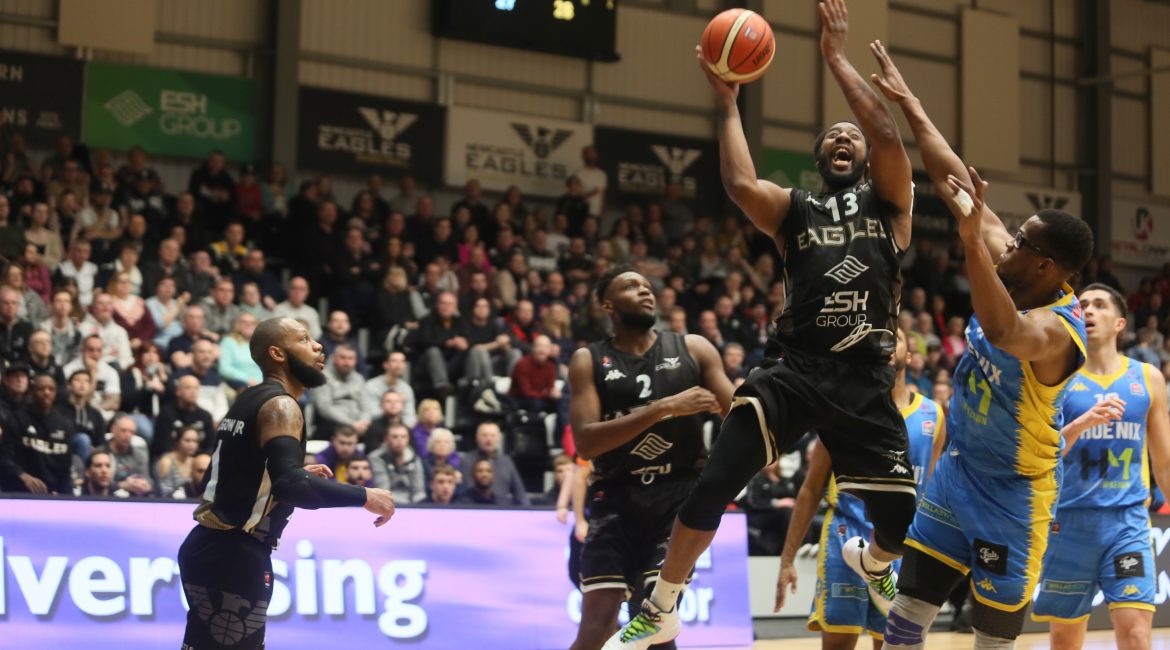 It was the spring of 2017 when Fabulous Flournoy’s Newcastle Eagles finished second best to treble winners Leicester Riders in a playoff final to forget.

Few anticipated it would be almost three years before the most successful franchise in the British game would make another domestic final.

And it cannot be overstated just how important this one-point aggregate victory could be to an organisation in transition, its ambitious players and the club’s rookie coach.

A nailbiting finish saw Cheshire’s Parker Jackson-Cartwright rim out with the three-pointer that would have sent the Phoenix through to a March 15 final in Glasgow.

Another One! @NewcastleEagle organisation has spoiled everyone in the past with regular appearances. However, Finals are Hard to get to!

Eagles at Gladiators in BBL Trophy First Round Draw
October 9, 2022

Congratulations to @CoachMacleod on reaching his first final as man in charge! 🦅 pic.twitter.com/L1wWrwxnsb

But there was little sympathy for the game’s leading scorer inside a bouncing Eagles Community Arena as the jubilant homecourt fans set about making fresh travel plans.

No team has won more Trophy titles than Newcastle and the six-times winners had long since targeted a lucky seventh north of the border.

But the Phoenix have their own proud history in a competition that has been kind to both clubs over the years.

And it was Newcastle who finally ended that remarkable run to claim the 2005 title – the Eagles’ first piece of silverware and the beginning of a celebrated period of sustained BBL success.

Dan talked the result over with Rahmon Fletcher after the final buzzer:

Fifteen years on and those glory days have stalled but with Division One Team Solent Kestrels lying in wait ahead of the 2020 final both teams sensed a chance to seize silverware.

That the hosts took a nine-point lead into the second leg certainly helped.

But Mockford missed the trip to Tyneside due to illness and the visitors were forced to run a seven-man rotation as a result.

Central to a rapid-fire opening was in-form Frenchman Sade Aded-Hussein.

The rangy forward had seven of the Eagles’ opening nine points – including a booming three-pointer from way downtown – as the hosts swiftly added to their first leg advantage.

And interim head coach Ian MacLeod must have been delighted with his team’s defensive nous and offensive fluidity in the free-flowing early stages.

A 7-0 tear to start the second quarter – capped by a cool Kai Williams finish – saw Newcastle go ahead again and this time MacLeod’s men guarded their precious lead with care.

Pinpoint passing and instinctive movement underpinned the move of the match with four minutes to play in the half as Darius Defoe set the seal on a fabulous passage of total team basketball.

But Cheshire refused to buckle under increasing pressure and the Phoenix trailed by just two points at the half.

On any other night it would have been job well done by the gutsy visitors but the 11-point aggregate deficit left Ben Thomas’s men with a mountain to climb.

Two free throws on the buzzer from Cheshire’s talismanic guard levelled the scores at 54-54 with 10 minutes to play.

It remained advantage Eagles but nobody could have predicted the thrilling comeback that laid the foundation for Jackson-Cartwright’s last-gasp shot to nothing.

And few will want a repeat of a dramatic finale when Newcastle tackle the Kestrels in two weeks’ time.