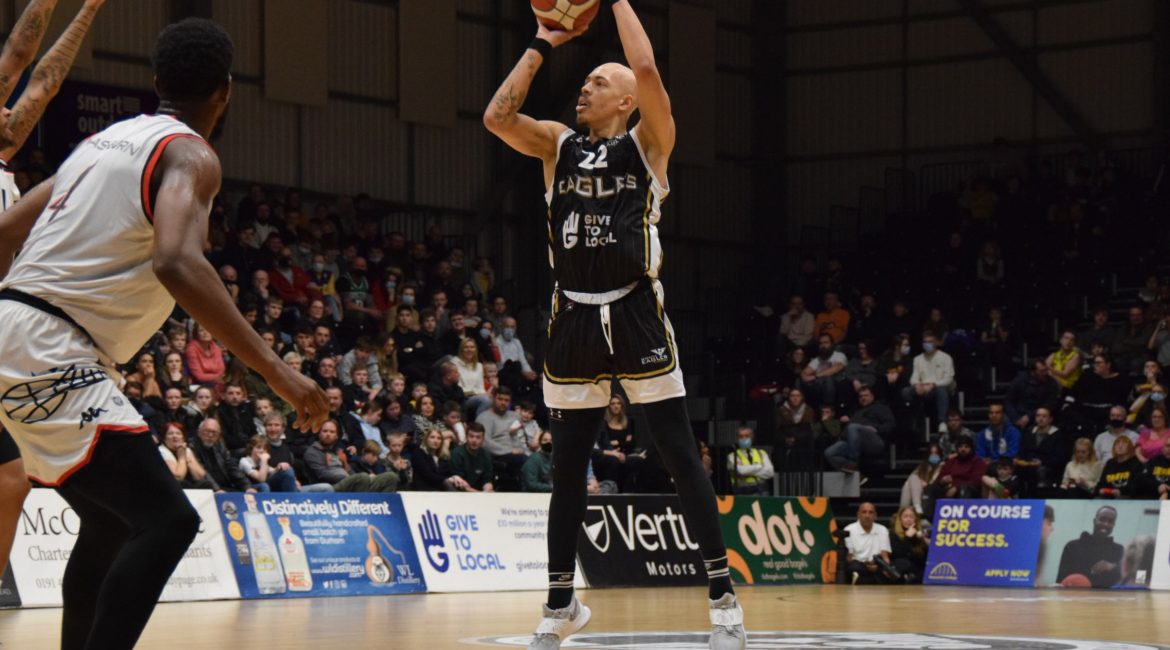 There’s no turning back for Newcastle Eagles tonight as they host Bristol Flyers in a crucial BBL Championship game at the Vertu Motors Arena.

With an away game at Bristol to come on Easter Monday, Coach Ian Macleod’s men could force their way into the play-off picture with a double over Flyers and a win at Surrey on Easter Sunday in-between.

Macleod knows the importance of the game and what Bristol will bring to the Arena as his side look to make one last run at gaining that end-of-season tournament-style finish to a difficult campaign.

“It is a hugely important game for us. Every game is a must win at this point. Making the playoffs is still possible but time is running out for us to turn things around.”

“Bristol bring real physicality. They play tough. They rebound very well. They rely on pressuring the offence and forcing poor decisions. We must move the ball well with great spacing. Force them to defend multiple actions. Match their physicality on the glass will be key.”

“Our keys to the game are all about being locked in and executing. We were in the game vs Cheshire last time out until we had a mental lapse in the last 2mins of the third. Everyone needs to stay locked in for 40mins.”

That Cheshire game was the Eagles sixth consecutive league loss. A run that has put them in the perilous position of being the first team to win the Play-Offs and then not qualify for them the following year since 2000.

One of the biggest factors in the Cheshire defeat was the absence of Captain and on-court leader Rahmon Fletcher through COVID protocols. Macleod had a cautionary word about the possibility of Fletcher’s return tonight.

“He is now covid free but it is now about recovery. We won’t risk health to rush him back. He is day-by-day at the moment.”

Forward Brandon Peel echoed a lot of what his coach had to say about Bristol.

“We’re still in their fighting for a play-off position and we know Bristol are a very physical good team so we really need to be on our A-game to come out with a win. It’s probably turned into our most important game of the season.”

“Bristol are a very well coached team that are also really organised and play to their strengths in a physical manner. They are very defensively minded so that could suit us. We have to come out, match their energy and execute with the same type of intensity they will have.”

“It’s a really crucial weekend for us with a lot of games in a short space at time. We can only take it one game at a time but we know what the prize is and no-one thought the road for us was going to be easy. We’re going to welcome the challenge and come out and fight no matter what.”

Despite those six consecutive losses and also the fact that Bristol won 73 – 55 the last time they came to the Vertu Motors Arena before Christmas, Peel is confident that the Eagles will be ready.

“Hopefully if we pull together, do what we have to do together and in the right manner some good stuff will come out of it all.”

The return of Fletcher could be the crucial element in getting Newcastle out of a position that you would have got long odds on them being in when the season started but it’s been a catalogue of woes, distractions, injuries and circumstances that have all resulted in this crucial game tonight.

As always the game tips off at 7:30pm as the Eagles go a-hunting for one last play-off push.