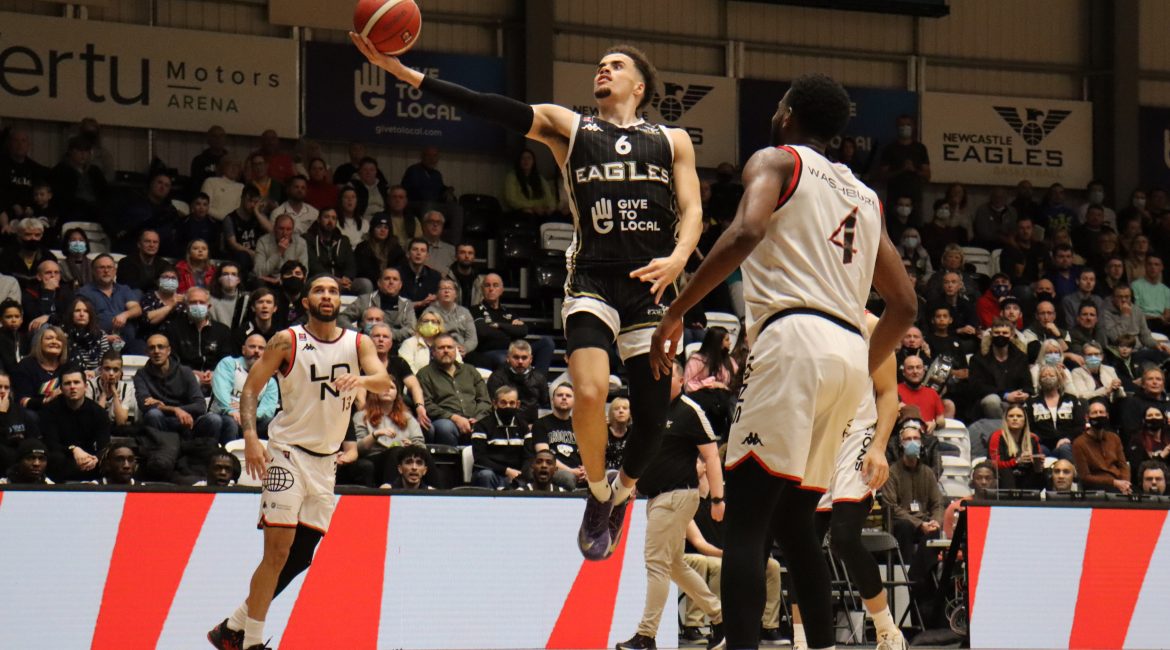 After two magnificent wins last weekend the Newcastle Eagles take on the Bristol Flyers tonight at the Vertu Motors Arena looking for a third consecutive win for the first time this season.

Canadian sharpshooter Corey Johnson who has settled well into his role at the Eagles and is averaging 15.8 points, 4.3 rebounds and 4.5 assists per game looked back on those games as he also looked forward to the game tonight.

“We felt really great after last weekend obviously. Friday night against London was a big night for us and was probably our best overall game as a team. Defensively and just being on point with everything we planned that week in practice.”

“Coach Mac prepared us really well and we followed through on the game plan perfectly. I think that’s why we ended up winning by so much against a good team like London. Then on Sunday it was another difficult game especially as it was two in a weekend and the second on the road.”

“It was tough but we managed to weather the storm throughout even Cheshire played a really great game and had some very big performances. But we were able to answer their runs and answer the big shots they had and luckily we are able to pull it through at the end.”

Johnson believes it wasn’t just about the wins but the performances as well as he hopes that it might just have been the weekend that turns the Eagles around that corner and enables them to progress.

“At the beginning of the season our circumstances meant we got off to a slow start. Other teams were a month ahead of us really in just being together and playing with each other. Now that we’re finally having those weeklong practices together and more and more on-court time I think we’re learning each other’s tendencies.”

“It’s helping us play as an entire unit. We’re all able to be more cohesive with each other as we go on and last weekend was a definite stepping stone for us in that respect.”

Although Johnson feels that all his teammates have upped their game in recent weeks he pointed out that the arrival of Brandon Peel has made a big and significant impact on the roster.

“It’s obviously difficult to come in and gel with a new team when your part-way through the season. But he’s done a great job of picking things up. Honestly, he’s brought a lot of energy and rebounding and smart defensive plays.”

“He’s a really good piece for us to be able to execute on the floor on offence as well as his shooting ability and being able to run the floor so he’s definitely helping us from that position.”

Bristol Flyers stand in the way of a third consecutive win tonight and whilst many will see this as a great chance for Newcastle to keep their run going Johnson knows that the Eagles have to be ready to play.

“It’s always tougher when you’re meeting a team for the first time as you don’t have a feeling for how they play on court. You can do a lot of scouting but it’s actually different than playing against a team and knowing how players play.”

“We’ve had a good week of practice leading up to the game and we’re ready for the challenge against Bristol. I think it’ll be another good game but hopefully we’ll be able to get that one as well and keep things rolling.”

“The keys for us are to come out with defensive intensity. Our defence leads to our offence. Once we’re all linked together everything else just becomes easier for us. So, if we assert ourselves on defence and on the glass early on I think we’ll be all right.”

It’s certainly a brighter and more confident Newcastle side that goes into the game tonight which tips off at the usual time of 7:30pm at the Vertu Motors Arena.