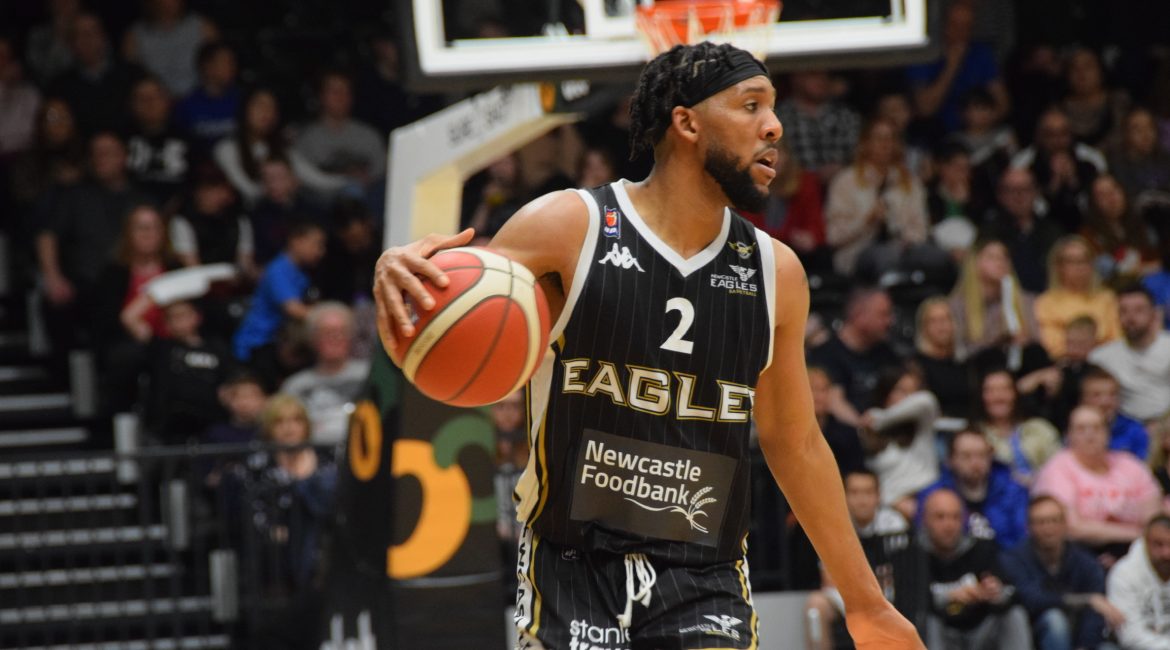 With the breaking news of Head Coach Ian Macleod stepping down from his BBL duties and another loss on Friday night at the Vertu Motors Arena, a seventh successive loss, you could be forgiven if you thought the Newcastle Eagles players would take their eye off the ball.

Not so says Wes Person Jr. who did his utmost best in the 77 – 90 defeat against Bristol to turn the tide. His contribution of 28 points and 6 assists without his back-court partner Rahmon Fletcher was a great effort from a player that has become a bona-fide BBL player in recent weeks.

He gave his thoughts on the game and his side’s prospects going into the final crucial week of the season.

“We came out and gave them our best shot. Being so short-handed it was tough as we could only really play six guys. Against a tough Bristol team, a physical team I think we matched their physicality from the jump.”

“Our effort was there and our intensity was there throughout the game. We just ran out of gas there towards the end and they went on a run late and it sealed the deal. I was proud of our fight in all four quarters tonight and hopefully we can recoup and be ready for Sunday.”

The Eagles face Surrey Scorchers this afternoon before travelling on to Bristol on Easter Monday. They then finish their campaign with the visit of Glasgow to the Vertu Motors Arena next Friday and then the long trip to Plymouth a week today.

“Just looking at the standings I think we have to win all four of our last games. It wouldn’t be easy because we’re playing some tough teams but we pretty much control our own destiny. We’ve just got to take care of ourselves first. Rest-up and be ready to play Sunday and Monday.”

Person has perhaps been one of the few bright sparks in recent games for Newcastle. Before Christmas he was averaging 10.4 points per game. Since the festive break he’s been at almost double that scoring at 19.8 points per game. He explained his thoughts behind that and his performance on Friday night.

“I just came out to be aggressive and with Fletch out having to play more point. I made sure I stayed within myself and did what I needed to do. Also trying to find the other guys and get them into rhythm.”

“Not playing all of last season I had to shake the rust off the first few months but I feel I’m coming into myself these last few months. I wish that would have translated into a few more wins for the team.”

“Of course, we’ve struggled as a team but it’s good to play well but I wish but as I say I wish that had translated more into success for the team and we had gotten more wins.”

“This season has just been chaos from the beginning with COVID, injuries and week after week it just seems like something new has gone against us and it just keeps coming. But we’ve just got to keep fighting and stay together.”

“We’re not out of it yet, we’ve still got some fight in us and we’re going to be ready to play in these last four games.”

Whether Captain Rahmon Fletcher and sharp-shooter Louis Sayers will be fit enough and well enough to play some part in those games could be key to Eagles drinking successfully in the Last Chance Saloon.

Also, there’s the x-factor of the Macleod announcement to factor in. He will be in charge for those last four games and it remains to be seen if his players can reward his loyalty in them to summon up one final last run to extend their season into the play-offs.