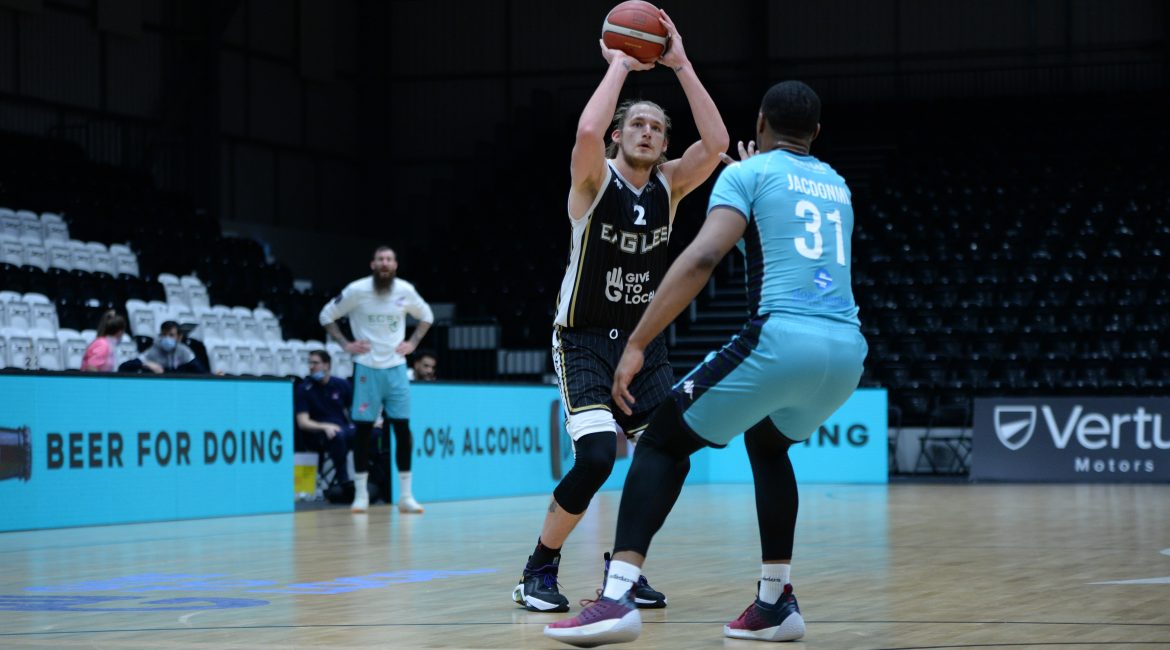 Newcastle Eagles are on a roll. On Friday night they completed their third successive double-digit win with a 98 – 78 defeat of Glasgow Rocks. They’ll look to take that form and confidence into Surrey this afternoon attempting to complete another double-win weekend.

Once again the back court duo of Captain Rahmon Fletcher and Cortez Edwards combined to terrorise the opposition contributing 47 of the Eagles points. Not far behind was Centre Evan Maxwell who had 16 points of his own along with 11 rebounds for an excellent double-double.

Maxwell reflected on the win which kept his side in second place in The BBL table. He also looked forward to today’s game against a Scorchers side who beat Newcastle slightly surprisingly 88 – 84 the first time the two sides met this season last month.

“I think at this moment in the season our biggest opponent is ourselves. If we stay consistent, keep doing the little things and control what we can control we’ve got a good chance of beating anybody. Of course, no-one’s going to just walk in and give you a win and that’s not our mentality.”

“I think if we do that and stay locked in then we’ll be all right. I think that was what helped us on Friday against Glasgow. It wasn’t one big play that happened it wasn’t one player. It was everyone working together and that’s when we made our runs and that’s how we won the game.”

With Glasgow turning up short-handed having had their two star Americans return home last Sunday many expected the Eagles to cruise to a victory but in a scrappy game, the visitor’s made it tough which didn’t surprise Maxwell.

“It’s never easy. It’s a good league and everyone’s professional. With us being Newcastle and our history, everyone comes at us with their best. We haven’t turned up to a gym and any team has just rolled over and said you can just have it. They’re always going to give their all.”

“It’s about us knowing that and bringing our best and we’re the only ones that stop us doing that. I actually think their changes made them more dangerous as we didn’t know who would step up and who would do what.”

“You can never have the mentality that it’s going to be an easy win. There are professional basketball players playing in a professional team and it’s the game of basketball. Anyone can beat anybody on any given night. So, we have to continue to have that mindset.”

The Eagles will definitely need to take that attitude into this afternoon’s game and have an added incentive having dropped that game to Surrey last month to get revenge.

“It could be easy to think we’ve got to get revenge but it’s just about taking care of business and doing what we do. We know they have some dangerous players but its about doing the little things, playing hard and playing together.”

“It doesn’t matter who we’re playing it’s about us at this point. I think we’re heading in the right direction and continuing to put the pieces together and I think we’ll be all right. We definitely want to get that win today, finish off this weekend and continue rolling.”

Rolling into Surrey won’t be easy for Newcastle but they make the journey in a confident and positive frame of mind looking to make it four consecutive wins.

Fans can follow the action live on the BBL Player with a 2pm tip-off.