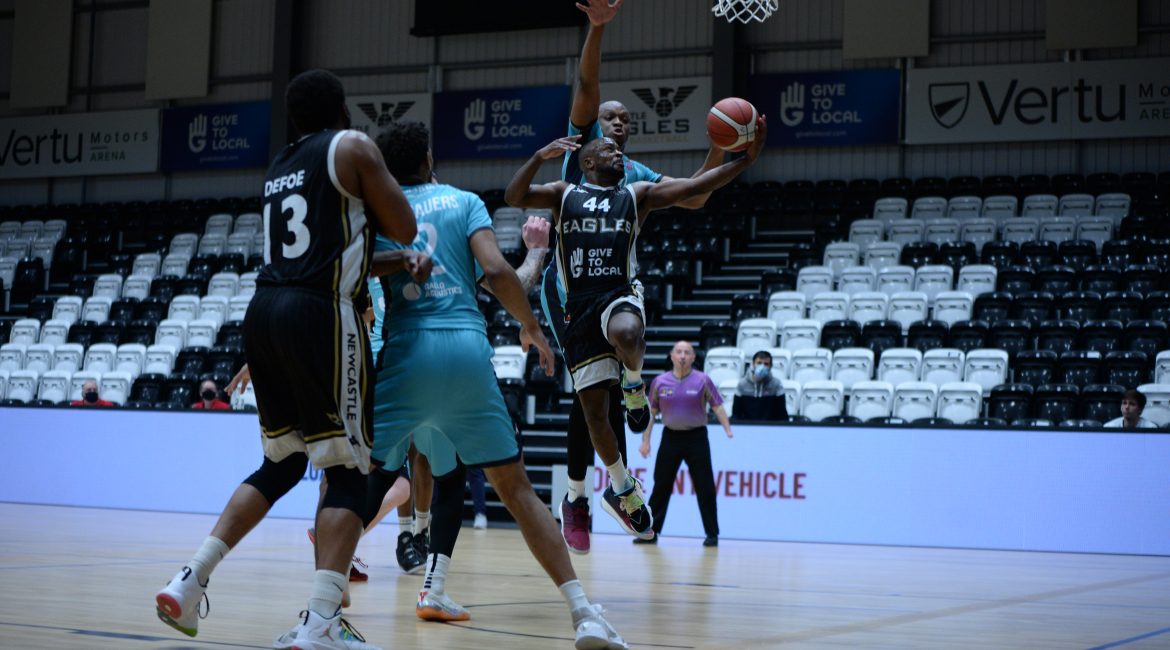 Double doubles for Rahmon Fletcher and Evan Maxwell paced a third win on the bounce for the men in black as Newcastle Eagles stayed second in the BBL Championship.

But a 20-point victory against basement side Glasgow Rocks didn’t tell the true story as the combative visitors pushed Ian MacLeod’s men all the way in a scrappy clash on Tyneside.

And Newcastle need to do better at Surrey tomorrow if the Eagles are to avenge last month’s four-point loss at the Scorchers.

Fletcher added 11 assists to his 22 points on a night when Maxwell bagged 16 points and 11 boards.

But make no mistake — this was far from perfect from a Newcastle team that often flattered to deceive before an impressively strong finish.

A social media account linked to the Rocks announced the April 1 signing of High School Musical’s Troy Bolton prior to tip-off.

But in a week when the Scots lost their two top scorers, it’s unlikely Glasgow fans saw the funny side.

And the American duo’s absence left player-coach Gareth Murray with a giant hole to fill ahead of last night’s trip south of the border.

In truth, the troubled Rocks could have included Bolton, Michael J Fox’s Teen Wolf and the entire cast of Space Jam…and still turned up at the Vertu Motors Arena as massive underdogs.

Standing between Murray’s men and a rare league victory was a full-strength Newcastle team that had destroyed star-studded London Lions seven days earlier.

By contrast, Glasgow named just eight players after Frenchman David Mpondo was ruled out with a back injury prior to tip-off.

And with big screen star Bolton conspicuous by his absence, this always looked like the ultimate mismatch in front of the Sky Sports cameras.

But it seemed nobody told a depleted Rocks roster that Newcastle were the red hot favourites expected to win at a canter.

Murray clearly missed the memo. And his players ignored the pressure.

The short-handed visitors deserved immense credit as they came out firing on all cylinders against an Eagles side that looked a shadow of the team that had tamed the Lions the previous Friday.

It was Murray’s typically committed four-point play in the closing stages of the first quarter that tied the scores at 19 apiece.

And Glasgow’s 36-year-old player-coach was leading his team with warrior-like determination against nervy Newcastle.

Things got considerably worse for the out-of-sorts hosts seven minutes into the second period as Marc Kwedi hit back-to-back triples to fire his team 34-33 ahead.

Newcastle simply weren’t at the races — missing far too many easy looks and lacking the aggression that underpinned their thoroughbred performance against London.

But after MacLeod called a necessary time out, an 11-0 tear to close the half opened up a 42-34 Eagles lead.

And with an eight-point platform to build on it was surely time for the men in black to step things up and set the standard in the final 20 minutes.

Despite failing to convert nine of his 12 field goal attempts, skipper Fletcher was still on the brink of a first half double double.

The two-time BBL MVP might have struggled to find his range early on but he had no trouble finding his team-mates — eight assists keeping the scoreboard ticking over.

And it was Fletcher’s buzzer-beating dish to Cortez Edwards, after the backcourt duo raced coast to coast exchanging intuitive passes, that suggested the best was yet to come.

For much of the third period Newcastle struggled to get out of second gear but another strong finish to the quarter kept the Rocks at arms’ length.

Five slick passes set up the offence of the night as Darius Defoe converted a rapid-fire play to shoot the Eagles 68-56 ahead.

But it was that man Fletcher who went for the jugular in the final minute of the quarter — two trademark drives to the basket setting the seal on an impressive 12-2 tear.

Newcastle led by 15 with 10 minutes on the clock and this time there was no comeback from the tenacious, but tiring, Scots.