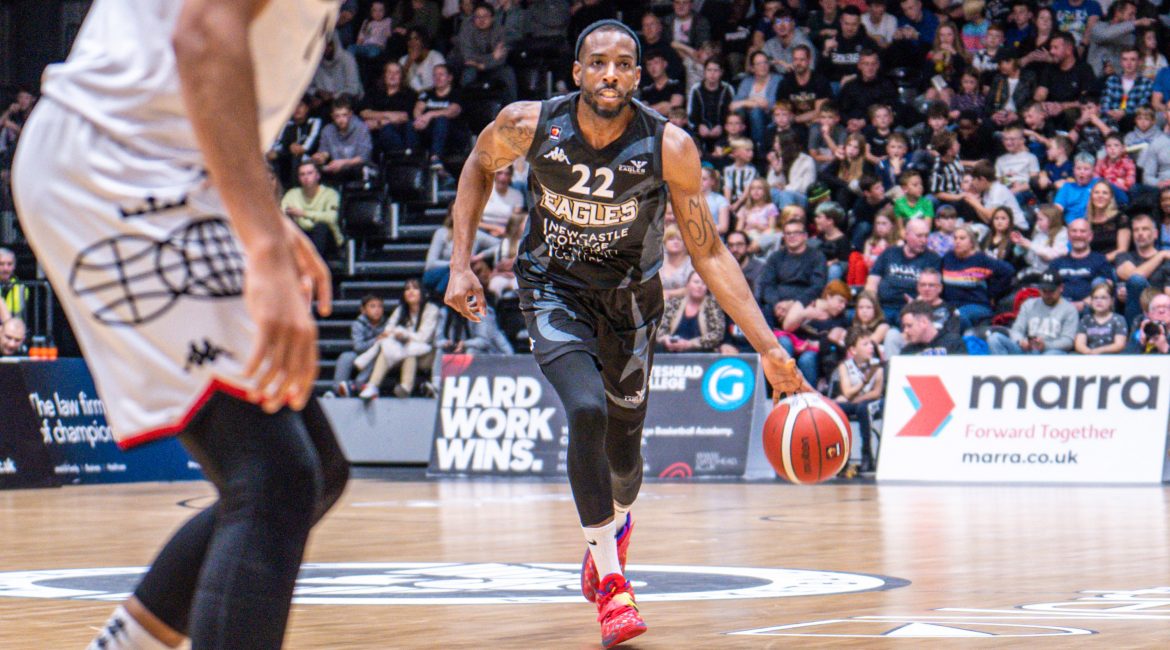 The winless Newcastle Eagles take a break from BBL Championship duties this afternoon and turn their attention to picking up a first win of the season in the BBL Cup.

They have made the long journey to the South-West to take on Plymouth City Patriots this afternoon.

Coach Marc Steutel will be desperate to get the “monkey off his side’s back” when they face the Patriots at The Pavilions which is always a tough place to take a road win from.

The BBL Cup is a competition that the Eagles have won on no fewer than six occasions and a win down and Plymouth would set themselves off another possible run to glory and at the same time kick-start their season.

On Friday night Newcastle lost their third league game of the fledgling season but there were signs of positivity to take from the game. Not least that but for one poor quarter, the third, they were right there competing against the BBL’s strongest side, London Lions.

One of the bright spots for Newcastle on the night was forward Jermel Kennedy. The Canadian born, British passport holder made his home debut and showed he has plenty to offer his new side this season. He gave his post game thoughts and looked forward to the trip to Plymouth.

“We fought. First half we did great things, pushed our tempo got into great spots and we went into the locker rooms at the half pretty confident. Javion (Hamlet) getting into foul trouble early in the second half didn’t help.”

“It increased the pressure on us taking us out of our actions but we tried to stay disciplined and true to what we’re good at but there were a couple of mental lapses in the third and we struggled to get back to them.”

“London definitely had a lot of depth but we don’t focus on those things. We come with what we have and had prepared the whole week for this and it is just is what it is. I think we can take some positives about the way we played especially in the first half.”

Turning his attentions to today’s game Kennedy well remembers the trips he made to Plymouth from his former time in The BBL with Worcester Wolves.

“I’ve played their a few times and it’s definitely one of the hardest places to make adjustments to what you’re facing up to. But we have a day’s rest and travelling and we’re not going to make excuses. We’re 0 – 3 right now so we’ve got to find a way to make those adjustments.”

“Sunday (today) is about doing a bit more of the good things we’re doing and minimise some of the bad possessions and decisions with the ball. Plus it’s important that we play together and stick together.”

“We definitely feel we have a chance to get the win and get ourselves going if we can just do that.”

The game at Plymouth tips-off at 3:00pm and is the first of two games Newcastle face on the road this week as they go to arch-rivals Sheffield Sharks this coming Friday night in the Championship on Sky Sports and hopefully with a Cup win behind them.

Fans can watch live on the BBL’s YouTube channel with coverage building up from 2:45pm.