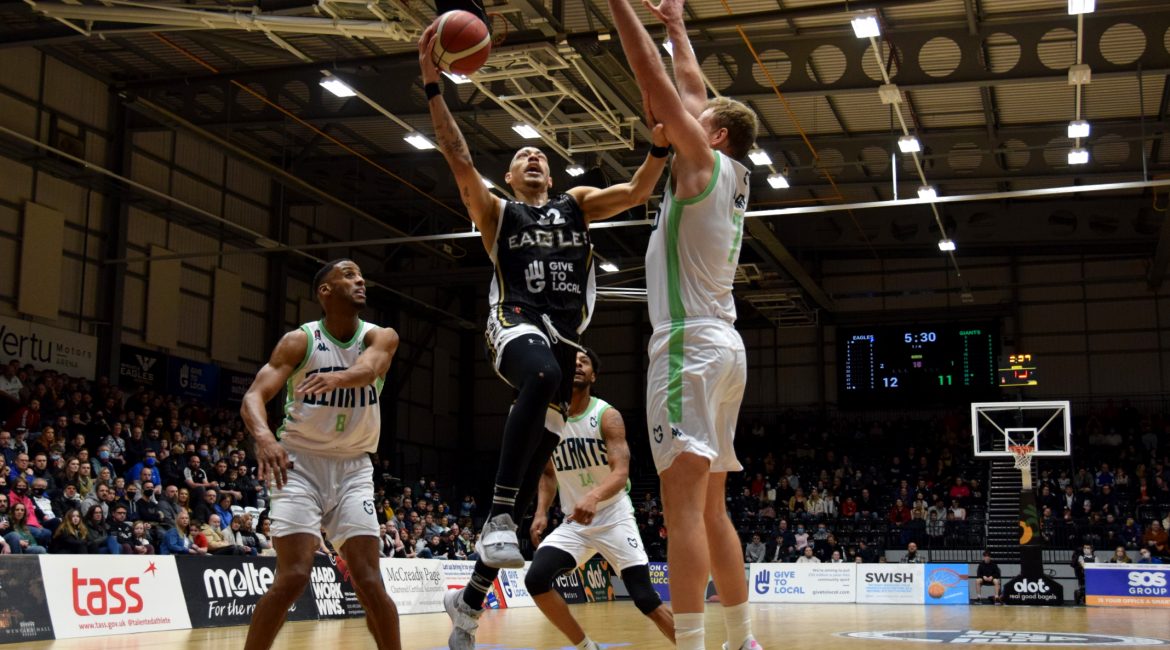 Newcastle Eagles go into this afternoon’s BBL Championship game at London with a spring in their step and some confidence and belief restored after Friday night’s thrilling 113 – 111 overtime win at the Vertu Motors Arena over Manchester Giants.

It was perhaps not a vintage Eagles performance but it was an explosive offensive display that arrested a five-game losing streak. A much-needed victory that in the words of Head Coach Ian MacLeod “got the monkey off our shoulders.”

The trip to the Lions den today is a daunting one that will be tough but after a fine Friday win it’s one that ex-London Lion Brandon Peel is looking forward to. The Eagles were led magnificently by Captain Rahmon’s Fletcher 32 points and 12 assists and Wes Person Jnr’s 21 points.

But it was Peel’s all-action, all-round 18-point 12 rebound display that caught the eye. It was his best effort yet in an Eagles vest and he reflected on the game and his display as he looked forward to return to The Copperbox Arena in the Capital.

“It felt great to get the win. We’ve been struggling a bit to get our rhythm and trying to find out what works for us. But this win at home in front of our fans means a lot and we’re just hoping to build on it going forward.”

“We locked in all week in our practices this week about execution and being tough on defence. We executed on the floor and that was the end result. Manchester are a very good team but I think we came out and did what we were supposed to do and I think that’s how we got the win.”

After the previous week’s defeat at home to London Head Coach Ian MacLeod had talked about the need for his team to show more intensity particularly from the start of the game. Something Peel commented on.

“We focused in on our intensity which we noticed has been lacking and not what it’s supposed to be. Even though we’ve got some guys injured the rest of us have to bring that energy every night. I think if we bring that intensity going forward we can improve on this season for sure.”

“I was focusing on getting the win so it was good to be able to contribute in the way I did. I’ve been struggling myself personally so I felt I needed it too and this was a good confidence game for me.”

“Coach is always preaching about attacking the offensive glass as well as the defence end so I was pleased I was able to contribute in that way and help my teammates.”

As mentioned Peel is an ex-London Lion having spent three seasons in the Capital and he’s certainly looking to enjoy this afternoon’s game.

“It should be fun. I’m looking forward to going back to London. We’re one and one with them this season so it should be a very good game. I’m hoping to see a lot of old friends, teammates and a lot of people when I go back but I’m also focused on the game and getting the win.”

There was a surprise during the week when London’s owners parted company with Head Coach Vince Macaulay, a man often called Mr London Lions. Peel paid tribute to his former coach as well as admitting it will be strange not to see him on the side-lines.

“Vince gave me my first shot as a professional and I owe a lot to him. I wouldn’t be where I am today without him giving me that opportunity. Going down to London and playing against them without Vince as Head Coach is definitely going to be a bit strange but we still have a job to do.”

A job that will be tough and one that is going to be difficult but Eagles and Peel face it in better heart after Friday’s thrilling win.

The game is free to watch live on the BBL Player with tip-off at 4pm.