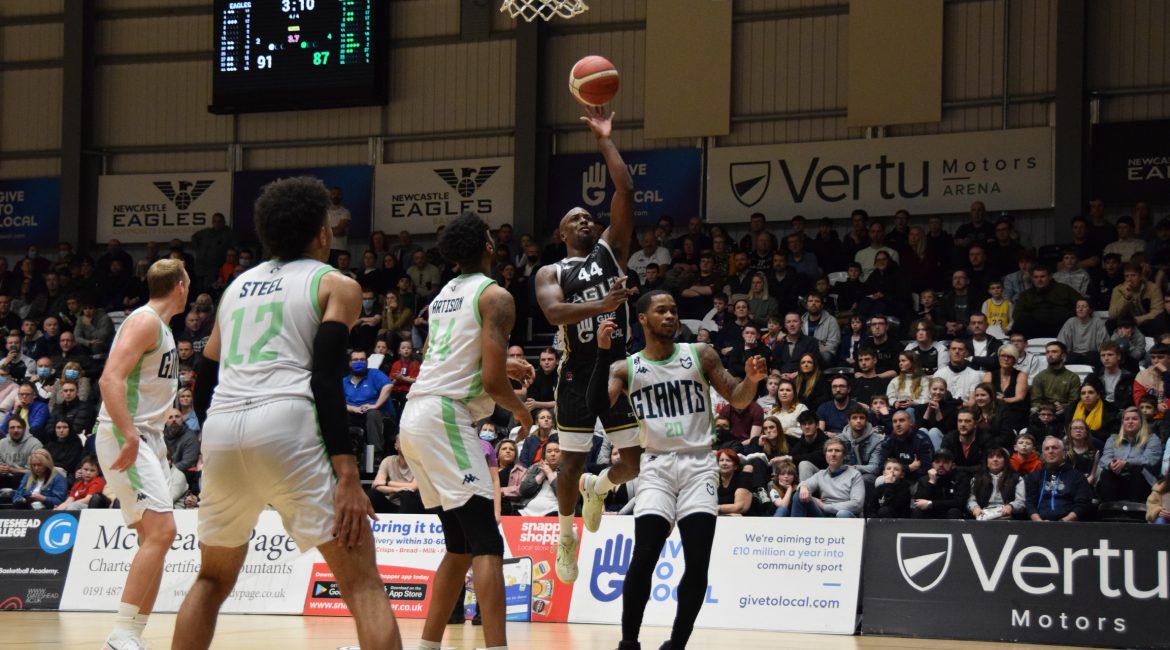 It was Meat Loaf, a self-confessed sports super-fan who took great pride in his performance at the 2003 NBA All Star game, who insisted two out of three ain’t bad.

And as the world comes to terms with the death of the larger than life entertainer, Newcastle head coach Ian MacLeod might just agree.

Prior to tip off the Eagles playcaller had demanded a strong start, more diligent defence and, above all else, a win.

With a 3-0 record against Newcastle this season and sitting pretty in second place in the BBL Championship, Manchester arrived on Tyneside as firm favourites.

Indeed, had the Giants not slipped up against Plymouth the previous weekend then the odds on an away win would have been considerably shorter.

Long gone are the days when Eagles’ fans headed out on Friday night expecting the men in black to roll over allcomers — often without breaking into a sweat.

And there was an increasingly familiar sense of foreboding around the Vertu Motors Arena as supporters took their seats fearing the might of Lloyd Gardner’s fast-rising Manchester.

A quick start from the under-pressure hosts was a prerequisite following a seriously sluggish opening against London Lions a week earlier.

Step forward skipper Rahmon Fletcher who went on to score more points in the first period against the Giants than he’d managed in the entirety of either of his previous two outings against Gardner’s side this season.

Back to his dynamic best, the two-time BBL MVP was rippling the net from inside and out as he rolled out his full repertoire of offensive moves.

And Fletcher surged to 13 points in the opening quarter as Newcastle’s talismanic leader led by example.

Not for the first time this season Duke Shelton made his presence felt off the bench and the popular big man made an instant impression after joining the fray.

The US forward announced himself with a deadeye fadeaway two and doubled his tally courtesy of a neat Kyle Williams dish seconds before the break.

The increasingly influential Shelton, who hauled down 13 boards against the Giants in October, bookended the quarter break with a crowd-pleasing alley-oop.

And it was the livewire Shelton-Williams axis that allowed the hosts to open up a 15-point Eagles lead within four minutes of the second period.

Offensively Newcastle could do no more.

But MacLeod’s pre-tip call to shore things up defensively appeared to have fallen on deaf ears as Manchester were allowed a way back into the game time and time again.

Nevertheless, the Eagles could do nothing about the controversial call that enabled the Giants to reduce the deficit to single figures on the stroke of half-time.

Great Britain forward Will Saunders, who will be hoping to earn a recall when Marc Steutel’s men face Belarus at the Vertu Motors Arena next month, tossed up a hopeful three-pointer as the second period buzzer sounded.

And the former Newcastle benchman, who endured a tough time during his short spell on Tyneside, could hardly believe his luck as the ball rimmed out only for the officials to spot the slightest of touches from Darius Defoe.

The Eagles veteran was incandescent with rage as Saunders was gifted three free throws — the Manchester man converting all three to reduce the home side’s lead to 57-50.

Fletcher had sat out the bulk of the second period but the club captain was back to anchor a potentially pivotal half of BBL basketball.

And come the conclusion of a wildly entertaining third period, Newcastle’s number 44 was one assist shy of yet another famous double double.

It was Fletcher’s cheeky steal and fancy footwork that allowed Wesley Person Jr to roll home a buzzer-beating two-pointer as the hosts took an 81-75 lead into quarter four.

And that deserved double double arrived in double quick time after the restart as the Eagles battled to keep their rivals at arm’s length.

Manchester tied the game at 96-96 and 98-98 in the final minute to take a BBL thriller into overtime.

What followed was pure chaos as the lead changed hands, Giants players fouled out and both sides had chances to seal the win.

This was British basketball at its brilliant, maddening best with the harassed officials barely maintaining a grip on a game long out of control.

When Person Jr missed a brace of free throws at 110-107 the door swung open back in Manchester’s direction and Saunders made no mistake from the bonus stripe to reduce the deficit to a point.

But Fletcher sank two from three from the free throw line inside the final 17 seconds to fire the hosts 112-109 in front and establish an unassailable lead. Meat Loaf was right: two out of three really ain’t bad.