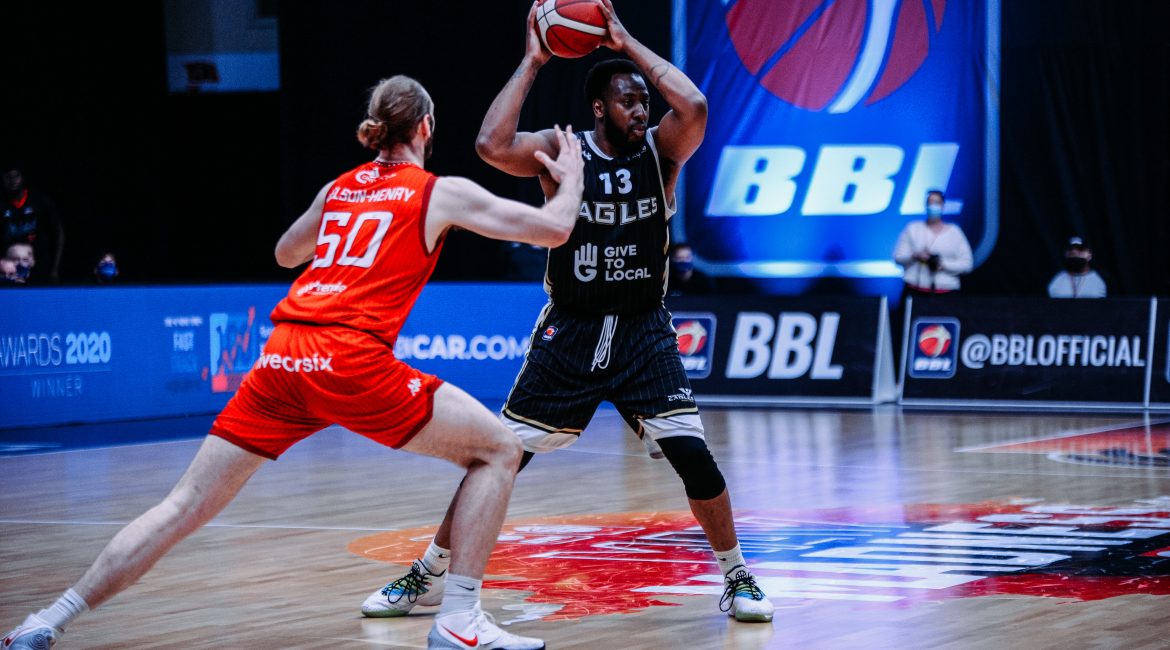 “We have to put the Cup results behind us and move on.” The message from veteran forward Darius Defoe as Newcastle Eagles prepare to begin their BBL Championship campaign at Leicester Riders tonight in front of the Sky Sports cameras.

It was a disastrous defence of the BBL Cup for Newcastle who only one out of their eight games and finished bottom of the North group failing to qualify for the quarter final stage. Whilst there were mitigating circumstances a-plenty it was still a major surprise to see the Eagles make such a poor start to the season.

Defoe himself due to COVID protocols has had to miss four games in that time although he was able to watch from the bench at last weekend’s two games. Despite his dislike of watching instead of playing he did take positives from the games.

“Corey (Johnson) and Wes (Pearson Jr.) have shown what they are capable of at this level and with five guys out the youngsters have had to step in and they tried their hardest and we can’t complain at their efforts.”

“Corey and Wes have done a fantastic job from the Sheffield game to last Sunday against Cheshire and did everything they could to lead the team, Then we got Duke (Shelton) back against Cheshire who helped them with a good inside presence and had a big game.”

Defoe though is still optimistic about the season but realises that tonight’s game is not going to be easy.

“It’s always a tough game at Leicester and tonight’s going to be another tough one. It’s one of those games where we just have to concentrate on ourselves and what we can do and get the job done.”

“I’m very hopeful that I’ll be back on the court to help the team. I’m back in practice and it’s going well. It’s just about getting my legs going again. I haven’t played for over two weeks and I’m just trying to get back to where I was at the start of the season.”

The fitness of both Rahmon Fletcher and Kyle Williams is still a concern for Head Coach Ian MacLeod as both face late fitness assessments to see if they are able to play. With Terrell Vinson having been released it could mean another short-handed roster even with Defoe back.

“We know it’s going to be tough and whatever players are available we just have to stay together and play as a team and help each other on and off the court. As a team we’re disappointed with what happened in the Cup.”

“But with everything that happened with guys coming in late, COVID and our injuries it was tough. But we have to forget about it, put it behind us and concentrate on the league now. We’ll be going all out to get a result tonight and start the league well.”

The Eagles are very close to securing Vinson’s replacement with an announcement expected either over the weekend or early next week. But tonight, comes to quickly for that player to line-up in the Newcastle roster.

So, Coach MacLeod and his assistants will be hoping to have Fletcher and Williams back as well as Defoe tonight as they prepare a game plan for their players to try and execute a winning start to the league campaign.

The game tips off at 7:30pm with all the build-up live from Leicester starting at 7pm on Sky Sports Arena (with subscription), Mix (free for Sky customers) and free for all on their YouTube channel.