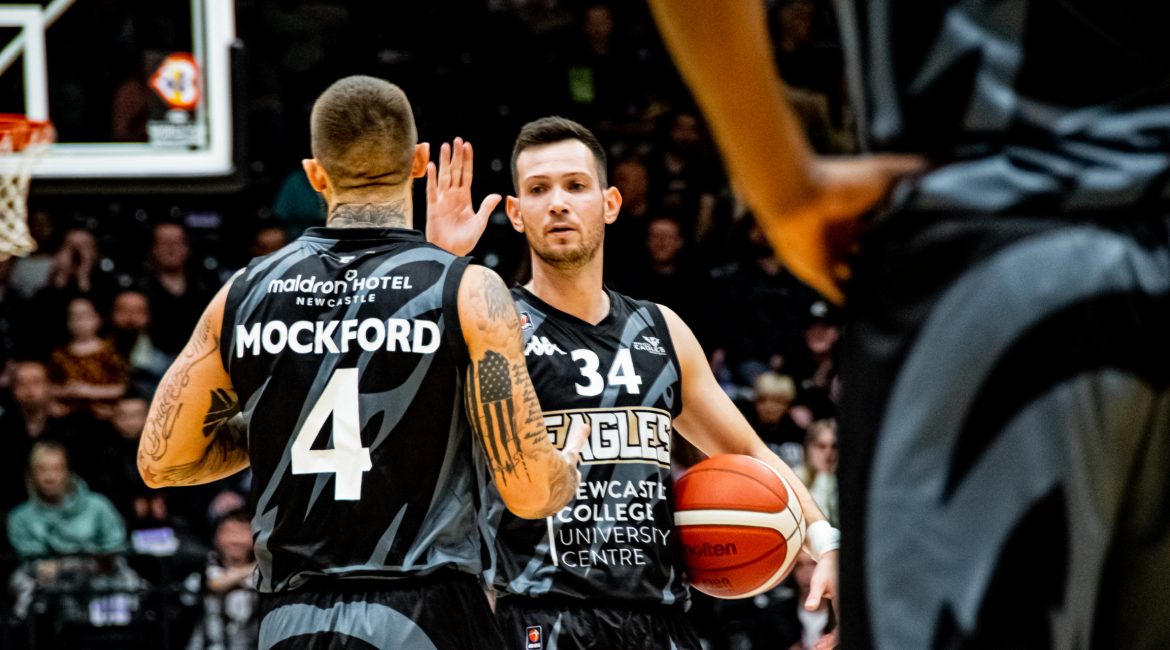 Newcastle Eagles head off on their first road trip of the 2022-23 BBL season this afternoon. Destination is Cheshire with a Championship clash against the hometown Phoenix in the offering.

It’s another tough assignment for Head Coach Marc Steutel’s side who tipped off their official season with a 64 – 84 loss on Friday night at the Vertu Motors Arena. Ex-Eagle and BBL legend Rahmon Fletcher at the heart of his new side Manchester Giants win.

The Eagles though held Giants for three quarters and actually took a 55 – 54 lead into the final stanza before Manchester sealed the deal with an emphatic and impressive 30 – 9 last ten-minute demolition of Newcastle.

Perhaps a twenty-point loss was harsh on the Eagles on the night but it was a lesson hopefully well learned and one they need to take on the chin and come bouncing back from this afternoon.

New point guard David Cohn made his competitive debut for Newcastle after joining the team late in pre-season.

“What an experience to play in front of this crowd. Possibly the best experience I’ve ever had on a basketball court”, said Cohn.

“It was all you could ask for in a home opener and I feel bad we didn’t get it done for our awesome fans.

“We were where we wanted to be after three quarters. I actually thought we played really well in the third quarter and had built up a decent lead. But for whatever reason it just broke down at the end and sometimes things go like that.

“I’m not too sure what turned it in that final quarter. I’ll have to watch the game as it’s hard to process and digest it when it’s going on.

“I think it worked in their favour that they’ve had two tough games together but I won’t use that as an excuse.

“We did what we had to do for three quarters and played good basketball.

“For whatever reason it just fell apart in the fourth and we have to look at the reasons why.”

Cohn did show a lot of potential on debut for the Eagles and certainly looked like an on-court general that can run a team dishing out 11 assists on the night, starting to find his targets and leading the team well. There’s obviously a lot more to come.

It’s a steep learning curve in the BBL as Cohn and his new teammates are about to find out as they head to Cheshire with only a day’s rest following Friday’s loss.

“We have to digest the game and each of us needs to learn from it and see what we can do about it”, the point guard added.

“We’ve got to get back to where we were after three quarters but execute down the stretch against Cheshire.

“We as players and a team haven’t had a chance to look at Cheshire yet as we focused on Manchester leading up to the game.

“It’s a long season, it’s a marathon, every one knows that.

“It would have been nice to have started the year on the right foot but unfortunately it didn’t go our way but I guess in the BBL there’s always another game around the corner and we can hopefully get that first win in Cheshire on Sunday.

Tip-off for this afternoon’s game is at 17:30 at the Ellesmere Port Learning Village and Eagles fans not travelling can follow the game on the BBL Player and the league’s YouTube Channel.