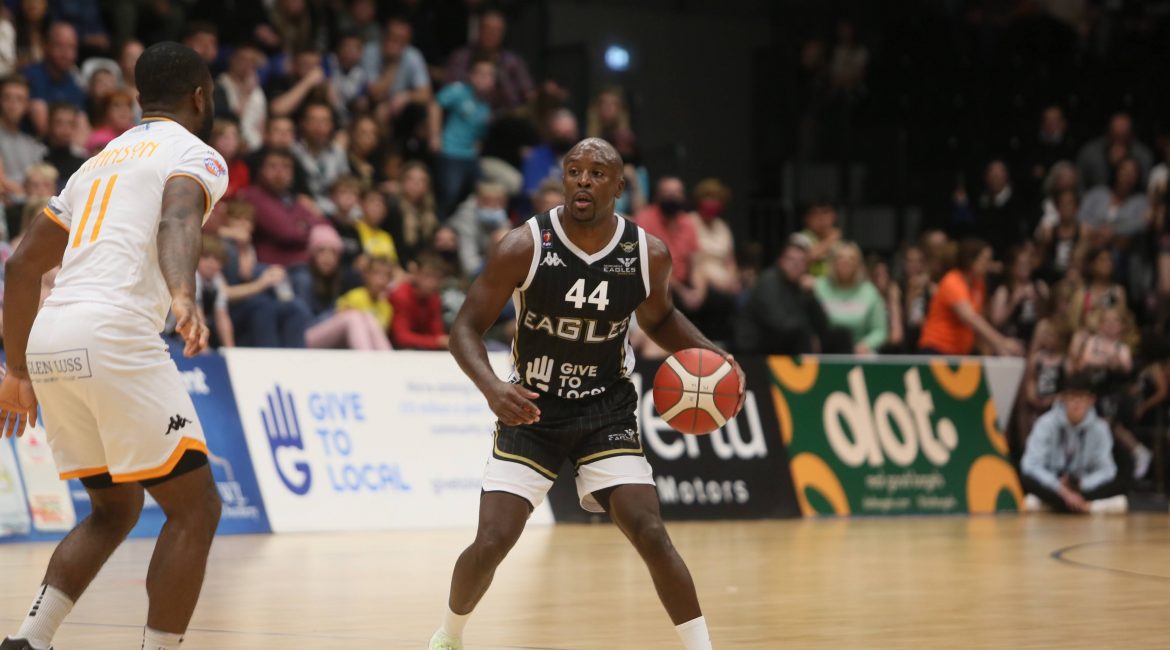 Rahmon Fletcher has revealed patience will be the key to a new-look Newcastle discovering their identity and realising their potential this season.

But the two-time BBL MVP insists the sky’s the limit for a group of players still smarting from last week’s opening night reverse at the hands of Glasgow Rocks.

And Fletcher is excited at the prospect of an early-season shot at redemption against old foes Sheffield Sharks this Friday.

There has been no kneejerk reaction to the Rocks loss from within the close-knit Newcastle camp — despite huge disappointment at a 10-point defeat.

And Fletcher said: “I think people have to realise that we’re in an unusual situation. I think our fans dounderstand that.

“I’ve only been here for 10 days and Duke [Shelton] came in a day after me. We haven’t got a full pre-season under our belts and that does make a difference.

“If we’re losing a game like we did last Friday in December or January then it’s a totally different conversation.

“Of course, it would be a cause for concern. But in the context of where we are right now it’s not something I’m worried about.

“We have guys who are new to the league and new to the country. They are playing with high expectations and little preparation.

“We simply have to be patient. But we also have to be relentless in our bid to get to where we need to be.”

And Fletcher is convinced that Newcastle will be contenders once Ian MacLeod’s remodelled roster finds its feet and starts to fire on all cylinders.

The visit of Atiba Lyons’ Sharks represents an immediate opportunity for the BBL Cup holders to get back on track in the defence of their title.

But Fletcher added: “The fact that we’re the defending campions doesn’t really come into it. “We simply want to progress — no matter what the competition is or who the opposition are.

“And I think with this team the ceiling is very high.

“We’re starting from the ground up but that’s what we have to focus on. The sky’s the limit.

“It’s down to the senior players, the players who know Newcastle and know the BBL, to implement the right mentality and we will.

“Until you experience what it means to represent the Eagles in front of a full house it’s impossible to prepare for that step up.

“We could line up all 27 trophies from one end of the arena to the other and say to the new guys ‘that’s who we are and that’s what we represent’.

“But until you experience the grind it’s impossible to explain what this club and this league is all about.

“That’s the reality of the situation. The new guys will only learn by playing against tough teams like Glasgow and Sheffield.”

While Newcastle struggled to keep pace with Gareth Murray’s Glasgow, the Sharks had no problem dispatching the Rocks last weekend.

And Sheffield’s Kipper Nichols reminded his BBL rivals to be on their guard this season after the US star bagged a double double of 23 points and 10 rebounds north of the border.

“I have massive respect for Atiba and the job he’s doing with Sheffield,” added Fletcher.

“Games between Newcastle and Sheffield are always going to be different from a preparation standpoint.

“There’s so much history and so much familiarity.

“There are players and coaches on both sides who’ve been around this league for a long, long time.

“Atiba knows the way Newcastle play and we know what to expect from the Sharks.

“There’s never a clear-cut favourite when these two teams meet and I’m just glad I’ve been part of a fantastic rivalry for so many years.

“It’s always a privilege to play against Sheffield Sharks.

“As for Kipper? Sheffield brought him back for a reason.

“Atiba doesn’t just retain anyone and he clearly sees something in Kipper that he believes in.

“Kipper’s already proving that his coach is right to have that faith in him.

“He’s had a fantastic start to the season. He faced some criticism as an import player last year but it looks like the Sharks were right to bring him back.”

Tickets are still available for this Friday night’s big game from the box office.