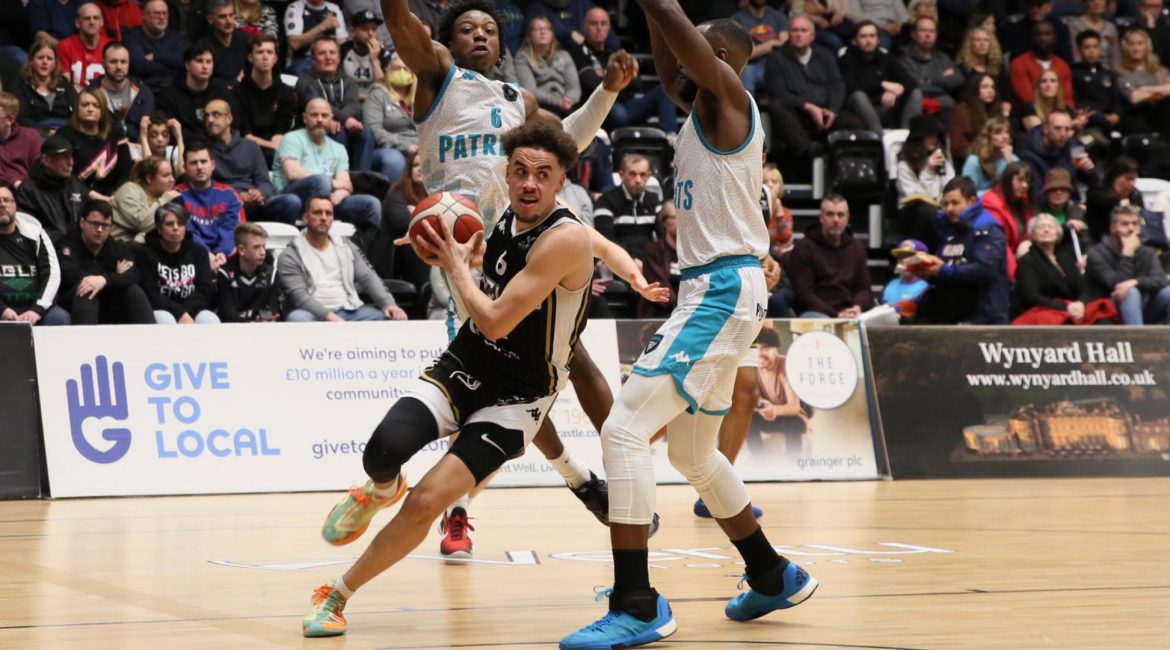 There may be many emotions and ways of describing Newcastle Eagles Friday night loss at the Vertu Motors Arena to Plymouth City Patriots by 91 – 87.

An entertaining excellent spectacle for the neutral, a thrilling win for The Patriots and a disappointing night for the Eagles.

It was a great game, not the purist but one that had fans on the edge of their seats right to the final buzzer. Perhaps having been fifteen points ahead midway through the third quarter Newcastle should have won? But Plymouth deserve a lot of credit for the way they rallied and seized the moment.

Eagle had played stifling defence to lead 43 – 33 at the half-time buzzer and looked good. Patriots though breeched the defences in the second half scoring 58 points to turn the game on it’s head and prevent Newcastle taking a fourth consecutive win.

It was another setback for an Eagles side that just can’t seem to get fully going this season after their many documented issues during the campaign. Meanwhile the Patriots who had not won a single game in 2021 have now won eight of eleven in 2022 and are very much on the charge.

Eagles Guard Corey Johnson was naturally despondent as he assessed a game that just got away from his teammates and himself.

“It was definitely a tough one. The better team showed up so all credit to them. They’re a good team and they executed well especially in the second half to get back in the game.”

“I think we just took our foot of the gas particularly at the defensive end and mistakes just snowballed. That’s something we’ve done all season long and we’re yet to learn how to stop teams when they get on a run before letting it happen and that’s on us as a defensive unit.”

It was certainly a tale of two halves and once Plymouth got on that run in the second it was difficult, as Johnson said, for the Eagles to check that momentum.

“They got on a roll and are playing with nothing to lose as they were sort of written off. You can see now they’re together on the court and they play a scrappy style of basketball and were able to disrupt our rhythm a lot which lead to them laying the foundation for the win.”

“We have to make sure going forward that we don’t take our foot off the gas defensively as I said. Our defence sets the tone for us on both ends. If we play defence well usually things work out for us on the offensive end and we didn’t carry that over too much enough tonight.”

“I think second half we didn’t adjust. They came up with some solutions in the second half and we didn’t execute our solutions and I think that was the story of the game. It’s our ninth loss in the league and that’s simply not good enough.”

“It all starts with our defence and it’s not two good enough to play two quarters of defence we have to play four and that’s what we need to build on. We were waiting for the win to come as opposed to taking the game by the scruff of the neck.”

“We were up by fifteen in the third and the foundation had been built but we broke what we’d built. They just made more plays in the second half and we didn’t. There are lots of things you can look at but we made the most mistakes in the game and that’s what cost us.”

The Eagles are next in action next Friday night when Manchester Giants come to town in a game that will be broadcast live in front of the Sky Sports cameras.

Tickets are on sale from the box office for another game set to sell out at the Vertu Motors Arena.