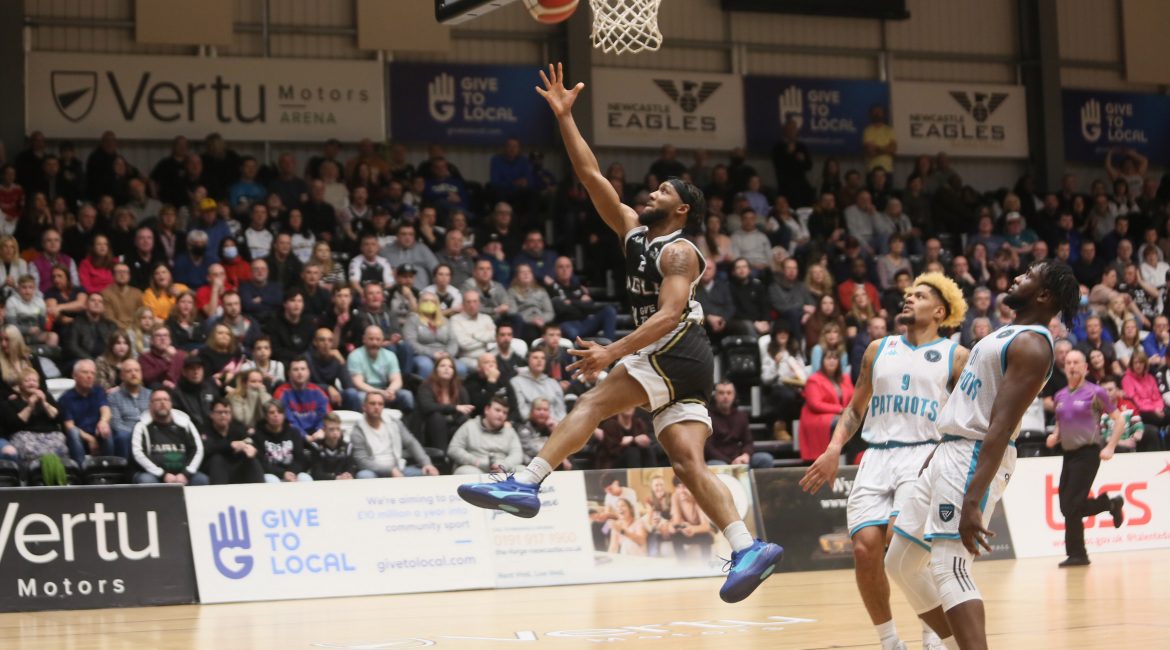 Newcastle Eagles snatched defeat from the jaws of victory as the Plymouth City Patriots delivered a stunning come-from-behind win on Tyneside.

Ian MacLeod’s men led by as many as 15 points midway through the third period and looked set fair to bag a fourth victory on the bounce.

Watch the Eagles vs Patriots highlights:

But another frustrating performance unravelled down the stretch as poor game management and defensive lapses allowed the Patriots a way back in.

And Paul James was able to mastermind another famous fightback as his locked-in players stayed cool from the free throw line in a frantic final minute.

Prior to Christmas a homecourt clash against Plymouth would have all but guaranteed two precious points for an Eagles side looking to secure a top four finish this season.

But the reborn Patriots headed to Tyneside on the back of seven wins from 10 BBL Championship games since the turn of the year.

And the visitors tipped off knowing an eighth league win of 2022 would see them draw level with Newcastle on 16 points.

An eye-catching victory against London Lions at the Copperbox Arena the previous weekend underlined Plymouth’s significant progress since December.

But the Eagles hit a purple patch of their own in February after bagging three successive wins following the return of Justin Gordon.

If the popular American’s much-heralded comeback dominated the headlines last month then it could be argued that an even bigger story was the remarkable reinvention of Wesley Person Jr.

The BBL rookie has added an unflappable level of consistency to his undoubted talent as one of the smoothest shooters in the league.

And a red-hot Person Jr suited up against Plymouth looking to score 20-plus points for the seventh successive game.

That he managed just 10 in the final analysis was just one of the many reasons the Patriots made the long trip home with a deserved two points.

Nevertheless, it was Person Jr’s all-action approach that provided the catalyst for the home side’s impressive start.

Two early missed baskets didn’t dent the shooter’s confidence as he continually drove into the paint.

And Person Jr’s inventive assist released Gordon for a regulation first quarter lay-up before he raced back towards the defensive end in time to take a brave charge in the paint.

A smart finish following a meandering coast-to-coast burst allowed the Alabama native to get on the scoresheet.

And Person Jr saved his best until last — sinking three from three from the bonus stripe to complete a canny buzzer-beating play.

Initially confident, Newcastle led 23-16 heading into the second quarter and, although Rahmon Fletcher sat out most of the period on two fouls, the hosts continued to dominate after the restart.

Louis Sayers sank the first of two first half threes before Kyle Williams burst onto the scene with brilliant back-to-back scores.

Under increasing pressure, Patriots playcaller James called a time-out with two minutes and 35 seconds of the half remaining and the Eagles leading 40-26.

And not for the first time in his celebrated career, Plymouth’s wily coach made the smart call with Newcastle on a potentially game-breaking run.

But the respite was only temporary for the Devon side as MacLeod’s men continued to create the better of the shooting opportunities.

Gordon moved to double figures on the back of a big triple 40 seconds from half-time and the Eagles led 43-33 at the break.

But the frustrated forward was benched after picking up a third foul before Person Jr drained his first triple of the night to open up a 54-39 lead.

It should have been game over but the Patriots’ response was a perfect reflection of their recent form as Plymouth launched a gutsy 10-0 tear.

And only three free throws from Williams in the final second of an unconvincing quarter kept Newcastle’s noses in front with 10 minutes to play.

That lead didn’t last as the visitors kept asking questions of an Eagles roster that saw Darius Defoe fouled out with three minutes to play.

And Person Jr knew it wasn’t to be when he stepped on the line with the final play of the game to cap a miserable night for the hosts.