Impressive Display For An Imperative Win 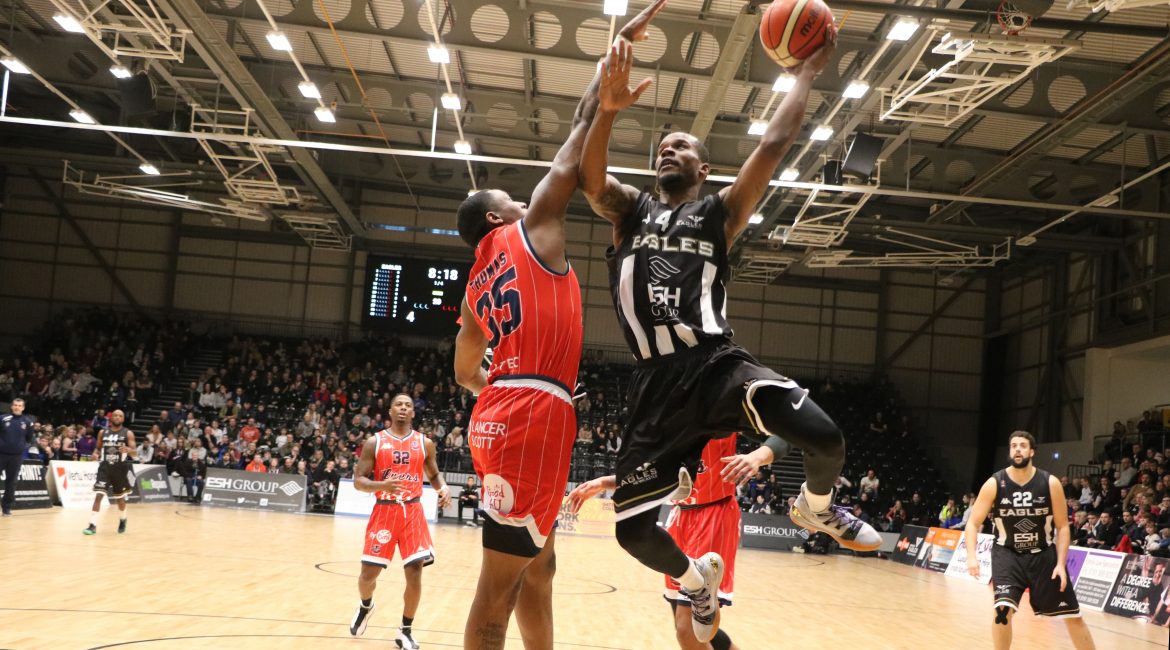 With the top two in The BBL, London Lions and Leicester Riders, both in action and winning on Friday night, it was imperative that third-placed Esh Group Eagles Newcastle did likewise to stay in touch at the top in their home clash with Bristol Flyers.

That’s what, in the end, they did in front of another packed house at the new Eagles Community Arena. After a hard-fought, tense and tough forty minutes of basketball it was Newcastle who came out on the right side of a 95 – 89 win where Bristol pushed them hard and asked tough questions of them all night.

The Eagles put in a really solid all-round team performance with no fewer than six players in double-figures lead by American shooting guard Jeremy Smith’s 20-point haul. In an impressive display he remained ice-cold at the death knocking down the free-throws that helped his team to a great win.

“We knew this game was going to be about a lot of energy. Bristol play a lot through their American guys who are young, very energetic and athletic so we had to be ready for that so we knew it was going to be tough.”

“We came in at half-time and the coaching staff told us it was about turning up our defence. I think we did that at the right times. We know we can score so defence has to be our stable and what we needed to pipe-down on and we got it just about right.”

Smith has proved himself a very reliable free-throw shooter for Newcastle this season and currently leads the team in that category scoring at very high 82% from the charity stripe. So, it was unsurprising that his team-mates kept finding him down the stretch as Bristol needed to foul to stop the clock.

He kept his cool well and those final few scores were what kept his side just far enough in front to ward off the Flyers and cement a vitally important win for the Eagles.

“It was just about knowing the situation and being prepared for the situation and trying to be smart about it. It just so happened it was me that got fouled but I had confidence in my team-mates as well if it had been them that needed to step up.”

The Eagles had gone in to the game after an International break when GB had to play. Head Coach Fab Flournoy had given his players some time off and Smith took the opportunity to fly back to the USA and see family and friends. He felt that had helped his performance on Friday.

“I definitely, definitely enjoyed being home and seeing everyone. It really rejuvenated me and it really did me a lot of good and refreshed me just when I needed it. Hopefully this is the beginning of the end of strong start that we need to see us through the rest of the season.”

This was Newcastle’s third win in a row at their new home which they really seem to be settling in to and responding to the atmosphere the packed houses are creating. They will need that all again next Friday when arch-rivals Glasgow Rocks return to The ECA next Friday night for another mouth-watering clash.