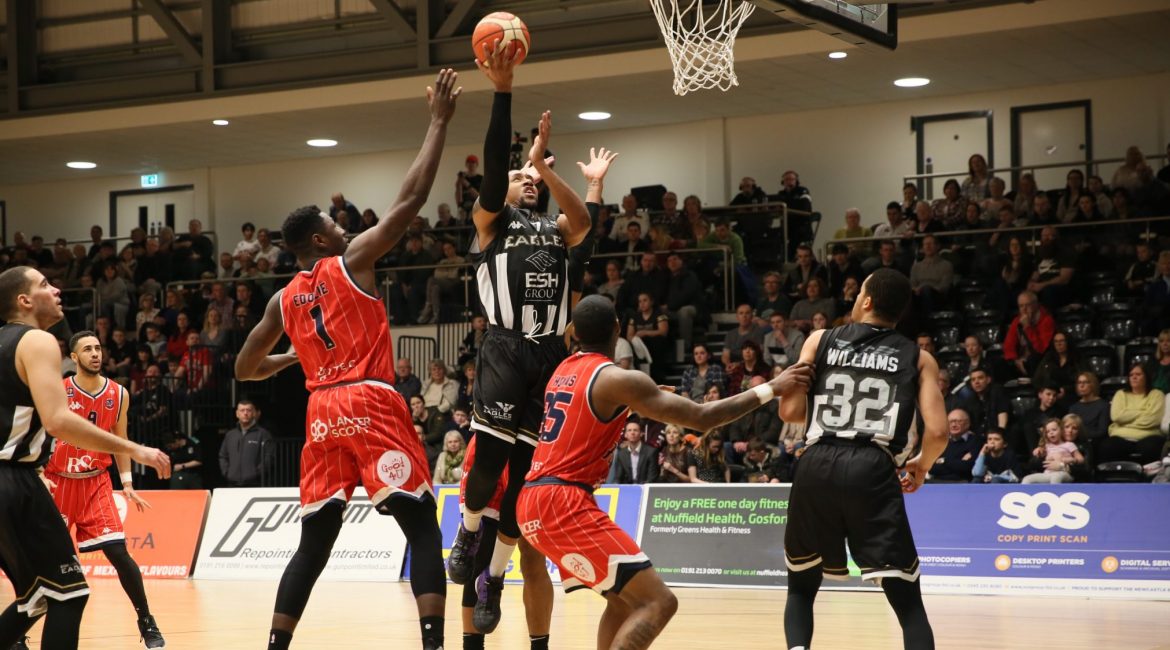 Throughout a campaign punctuated by frustrating inconsistency it’s taken one of Newcastle’s least heralded summer signings some time to emerge from the shadow of his veteran namesakes.

Perhaps this was the night that the ‘third Williams’ finally made his name. Seventeen points in just 16 minutes – a busy shift bursting with enthusiasm – proved to be the sweetest of cameos for super-cool Kyle. Williams the conqueror? Almost.

Without the ever-willing rookie the Eagles may well have fallen short against a Bristol Flyers side battling to stay inside the BBL’s top eight. Another unconvincing Newcastle performance raised more questions than it answered and a topsy-turvy first 20 minutes epitomised the problems facing a team still lacking identity six months into the season.

The Eagles had shot a meagre 37 per cent from the field during an ugly first period but even before Darius Defoe belatedly rediscovered his range, a more focused second quarter had helped to turn around a scrappy clash.

Newcastle went into the half shooting an improved 54 per cent of their field goals but, in a switch up more akin to the Eagles of old, greater productivity at the offensive end stemmed from better discipline under the defensive glass.

Bristol had out-rebounded the home side 16-10 during the first period – claiming seven offensive boards to Newcastle’s two – to carve open a deserved 22-19 lead. But 10 minutes later and the Eagles were back on terms in the battle for the boards and, unsurprisingly, the points began to flow.


Kyle Williams had picked up his 12thpoint in just nine minutes midway through the second quarter and the all-action American was the spark for a dominant run to the break. Fit-again Victor Moses, brought off the bench on his return to action, began to make his presence felt in the paint and Rahmon Fletcher kept picking the Flyers’ pockets on his way to a game high 12 assists.

But the interval was a momentum killer for the black and whites and within six-and-a-half minutes of the restart Bristol were back in front. Using former Team Northumbria favourite Lewis Champion’s knowhow and the inside nous of Marcus Delpeche, the Flyers forced their way back into contention. Looking more like the side that had defeated Newcastle by 13 points earlier this season, rather than the team that had lost eight out of their last nine games prior to the trip to Tyneside, Bristol’s comeback was a credit to coach Andreas Kapoulas.

It didn’t last. Just as the Eagles had reasserted control towards the end of the second period, the hosts wrapped up the third with a teasing 12-4 tear. Leading 72-65 heading into the final quarter it was surely time to ground the Flyers for good.

But in a game where unpredictability was the prevalent theme Bristol bounced back again. Closing to two, with six-and-a-half minutes on the clock, the visitors refused to buckle and another dizzying advert for BBL basketball at the Eagles Community Arena threatened to go down to the wire.

Reassuringly for player-coach Fabulous Flournoy no fewer than six Newcastle players took double-figure hauls into the final five minutes and it was that spread of scorers that represented the hosts’ biggest strength. The Flyers simply couldn’t afford to double team any one opponent for fear another black and white shirt would exploit the space – sensible decision-making and swift distribution could swing the game in the Eagles’ favour down the stretch.

And so it proved. Yet again it was Kyle Williams who kickstarted another late Newcastle run as the young American delivered another pivotal scoring burst. Flournoy’s decision to bench the irrepresible guard in the final two minutes was, by some distance, the least popular decision of the night and a starting five sport surely beckons with Glasgow Rocks back in town next Friday.