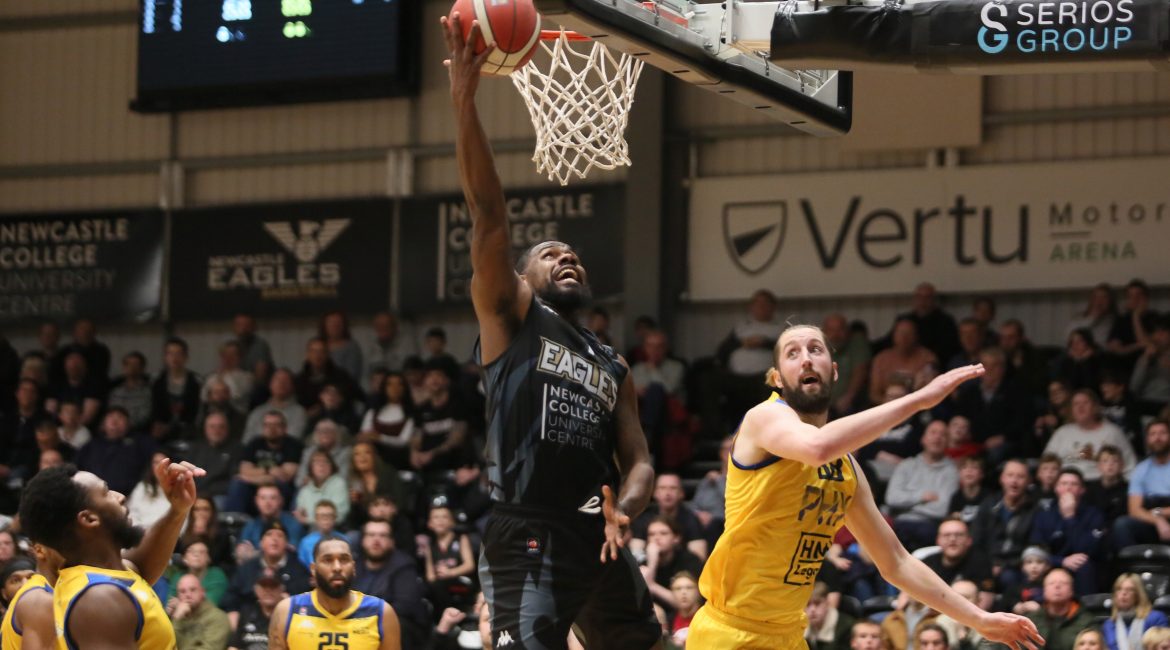 It was another disappointing Friday night for all connected at Newcastle Eagles as the home side slipped to a third consecutive home loss in the BBL Championship. A disastrous first quarter being the key to the game.

Cheshire came out all guns blazing from the opening tip-off and Newcastle’s virtually non-responsive defence allowed them to carve out what in the end turned out to be an unassailable lead.

Add in the Eagles own lack of firepower and by the end of the first quarter the Eagles were in a hole they never quite got out as they went down to a 67 – 75 loss to further endanger their play-off hopes.

Eagles guard Kyle Johnson who top scored for the home side with 17 points assessed the latest performance at the end of the game.

“They put up 31 points in that first quarter and that’s way too much. We had the better of the game after that but we got off to a rough start and that really cost us as we couldn’t get back at them”, said Johnson.

“The focus has been on defence this week so it was disappointing for that to happen in the first quarter. We did turn it around for sure but it was a little too late. We definitely have been practising a lot on defence and it’s unfortunate that the first quarter got away from us.

“But there are some things to build on moving forward and we just have to keep working at it and hopefully get off to a better start next time.”

Head Coach Marc Steutel had talked about keeping Cheshire below eighty points to give his side the platform to set up a win. Despite that first quarter the Eagles managed to do that but for once their offence spluttered.

“Defensively Phoenix did a really good job on us. We just have to keep working. Defence has been our problem in the last few games. This one game got way from us and now our offence was off”, the guard added.

“We have enough talent here at Newcastle. We have just have to keep working and believe that we can turn it around.”

Johnson himself has started to show why Coach Steutel brought him in. After a slow start he has now top scored in the last three games for the club but he’s still not satisfied with his contribution as they have not helped his side win.

“Despite my points I still feel I didn’t do a good enough job rebounding the ball and had some turnovers. It’s not about individual performances for me it’s about the team getting the win. Right now we’re struggling to do so”, said the Canadian-born British player.

“We need to get back in the gym, put in the work and hopefully we’ll come away with some wins moving forward.”

Johnson made reference to the defensive presence of new signing Hasahn French who made his debut on Friday. The 6’ 7” power forward has been brought in to hopefully add defensive power to the Eagles roster.

“The history with Hasahn is that in college he was a very, very good defender and it’s what he’s renowned for. He just got here on Thursday night so he hasn’t really practised with us but I think he’s going to be a good fit and I’m looking forward to working with him.”

“We have a solid group, a bunch of good guys that want to work and we are putting in the work. We just have to keep believing that it’s going to turn around because it has too.”