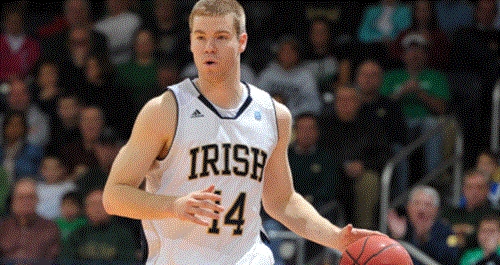 The Newcastle Eagles today announce the first of a number of new signings for the 2013-14 season with the signing of Scott Martin, captain of the mighty Notre Dame Fighting Irish.

Scott is a 6`8 forward who was ranked in the top 100 players in America coming out of high school. He spent a year at Purdue University before moving to Notre Dame University. He was the captain of Notre Dame for the last two seasons and voted to the All Big East tournament team in 2012.

Martin averaged 9 points per game and 6 rebounds over the course of his college career and shot 46% from the three point range in his final season.

Martin is keen to get to grips with professional basketball and is ready to fly east;

‘I have a few friends that have visited England before and they all only have great things to say, so I am excited to have this opportunity and cannot wait to get over there and start the season. My hopes for the upcoming season are simply to help the team in anyway I can. Winning is the most important thing and I want to do whatever the team asks of me to get that done’.

Coach Fab Flournoy is excited to be working with a graduate of one of the top US college programmes;

I’ve spoken with Scott at length and he comes across as a smart, motivated young man. I think he is going to bring a very positive feel to the club this year and will work well with the squad we are continuing to assemble’.

Further signing announcements will be made in the next few days as the Eagles continue to prepare their roster and pre-season schedule, starting September 1st. Eagles first home game of the 2013-14 season will be against local rivals Durham Wildcats in a derby season opener.