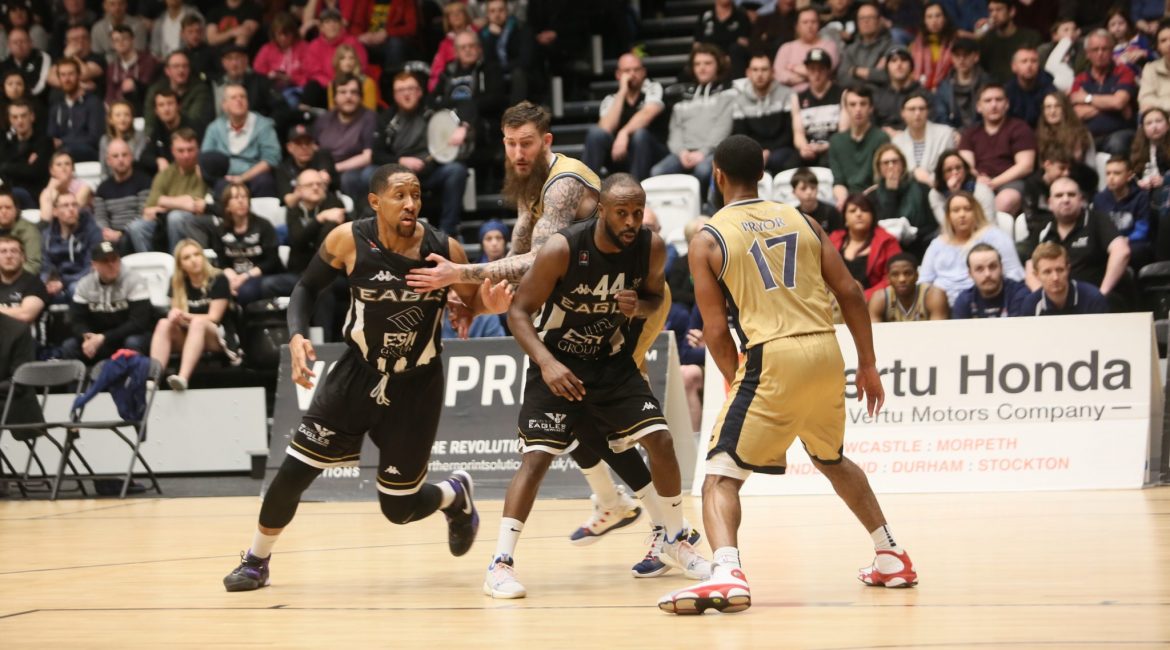 The last time Esh Group Eagles Newcastle and Glasgow Rocks clashed at the Eagles Community Arena, the Scots pushed the Geordies all the way to overtime before the Eagles eventually prevailed. So, on Friday night and facing a team with a new coach, Fab Flournoy and his men expected another tough one.

For a while it was. But Newcastle, who had jumped out to a lead early on, controlled the game throughout keeping Glasgow at arm’s length before powering away to an 83 – 66 victory. The difference? Well, it can’t be all down to one man but there is no doubting that the Eagles are a better side with Victor Moses in it.

The power forward who missed the last clash was in superb form and his 25 points and 10 rebounds in an MVP performance on the night was certainly the inspirational lead his side needed as they took the season series against the Rocks 3 – 0 and won their fourth game in a row at their new home.

Moses was not alone, Kai Williams and Jeremy Smith were also in double figures and the inspirational court leader Rahmon Fletcher had a double-double of his own with 13 points and another incredible 12 assists, a category where he’s way ahead in The BBL.

But it was Moses who really caught the eye in an Eagles performance that turned back to their defensive philosophies and completely shut the visitors down on the night. The big American was a happy man at the final buzzer as he reflected on the game.

“It was a very impressive all-round performance from us and it felt good to get out there and get a win on the home floor. Our defence was really good all night. We’ve been practising and correcting our rotations and making sure we help the helper and we did a great job of doing that today.”

Moses’ own performance went a long-way to helping his team-mates out at both ends of the court and he was quick to praise the part they played in helping him produce such a great effort and impressive statistics. In particular Moses picked up Fletcher with whom he has a great understanding on court.

Watch Fletcher and Moses in action together on Friday night:

“My team-mates did a great job of finding me in open positions on the floor and I just did my best to try and take advantage of it. Playing with ‘Fletch’ makes the game that much easier. He’s one of the best if not the very best point guard in our league and having a guy like that on your team makes it easier for everybody.”

The Eagles 1-2 punch of Fletcher and Moses is certainly something that makes them stronger and as it draws focus from the opposition it allows others like Smith, Kai Williams and Darius Defoe to prosper. Last month without the Eagles Little and Large show they lost at Manchester.

With both back and both looking really sharp and fit it adds to the confidence and firepower of Newcastle all of which they’ll need going forward as their next game sees them travel to Championship rivals Leicester Riders next Friday night for another huge test as Moses appreciated.

“Leicester’s always a tough team to play especially at Leicester, it’s going to be a tough one but it should also be a good one and we have to be ready to play and win as it’s vital we keep our run going.”