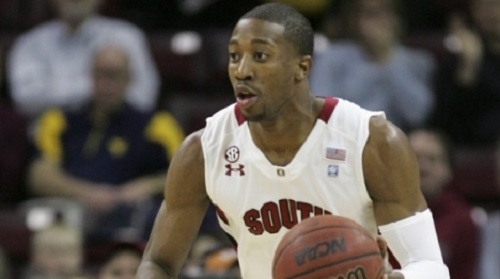 The Eagles continue their drive into the 2013-14 season with the signing of Malik Cooke, an explosive 6’6” guard from the University of South Carolina.

Cooke led his team in scoring in averaging 12.6 points, 4.6 rebounds, nearly 2 steals and shot 33.3% from 3 point range in his senior year at South Carolina in one of the toughest conferences in NCAA basketball; the SEC. His senior season consisted of a number of notable performances including scoring 21 points against the then national no2 team Ohio State containing future NBA prospects Jared Sullinger, Deshaun Thomas and Aaron Craft.

Cooke is looking forward to joining the North East programme in the coming weeks; ‘The Eagles roster looks talented and tough with a lot of different weapons, I’m really looking forward to being a part of this group and making a run for the title’.

Coach Flournoy was pleased to find the right fit for the club; ‘We have been looking for the right type of player to come into the guard rotation, to complement Lasker and our anticipated PG signing. We have looked a large number of guys coming out of strong traditional programmes but felt Malik had the size, athleticism and determination that we are looking for this season’.

The Eagles team is now closing completion, with further signings to be announced this week.