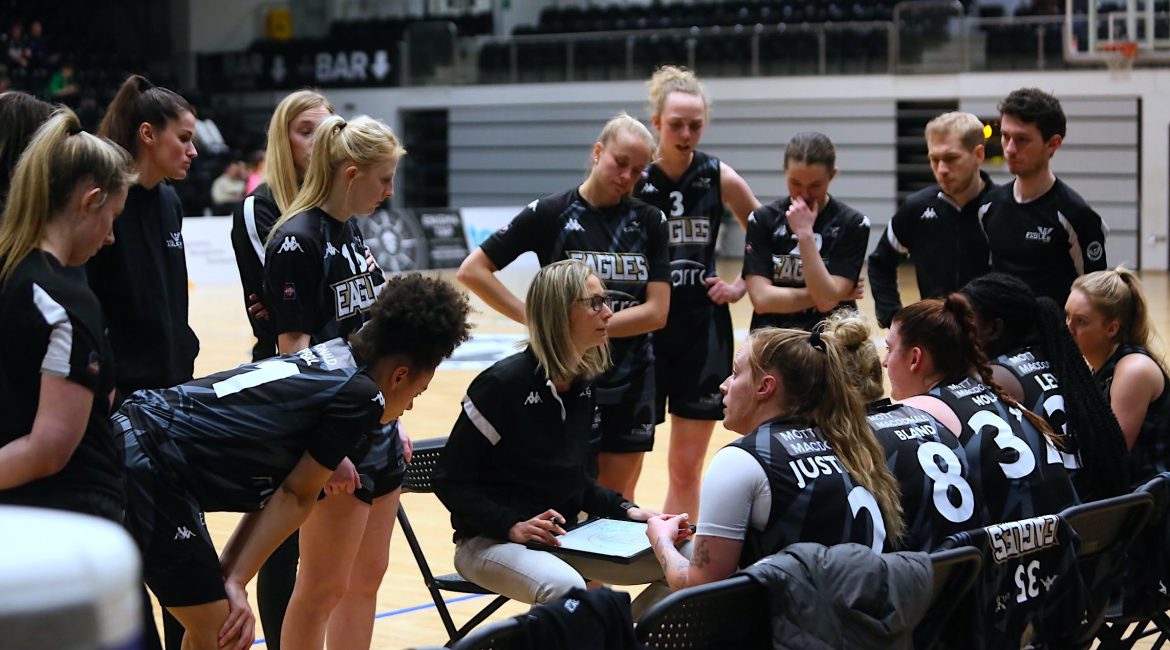 It was a bad night at the office for the Newcastle Eagles WBBL side last Saturday night as minus four senior players they had to take on the domestically unbeaten London Lions.

It was therefore no real surprise at anyone when Lions took the win but perhaps the margin of victory was. A score line of 123 – 43 was certainly not what Head Coach Noelia Cacheiro had in mind when she sent out her short-handed roster.

Now it’s about recovery and character, and preparing the side for the rest of the season which starts at home in the Vertu Motors Arena this Saturday night against the Sheffield Hatters another tough opponent.

Cacherio is hoping her side can bounce back from last Saturday’s game although she certainly has her sights on bigger things for the rest of the season. Cacheiro though started by being philosophical about the London game.

“It was an opportunity for every one that was available to play against a different team than those we’re used to playing in the league. The Lions are a team that compete at a much higher level to everyone else.”

“I think it was a great opportunity for everyone to face that kind of level. The girls got out scored in the first half and we didn’t know how to respond because we were playing as if we’d lost the game before it had even started.”

“So it was a lesson to be learned and we did but more importantly it’s time to put it behind us, move on and look at the bigger picture. There are games coming up for us which will be the difference between us making it to the play-offs or not.”

The Spanish play caller is hopeful that she has some of her missing pieces back for Saturday’s game although she was cautious about exactly who would return and what role they could play.

One player that definitely will be available to the Eagles and Cacheiro is the returning Abby Lowe who re-signed for the club, but couldn’t play on Saturday as her international clearance was held up. It’s now cleared and Lowe will be part of Cacheiro’s rotation on Saturday.

The Head Coach though is not just looking at Saturday’s game but as she’s already said beyond that to games her team are expected to win.

“Last time we played Sheffield it was a bad performance for us. We only really played for the first five minutes and then after that it was a really tough match.”

That game was in Sheffield back in October and despite a 17 – 2 Eagles start and taking the first period 23 – 14 Newcastle ended up losing the game 89 – 52 emphasising Cacheiro’s assessment of that game, 75 – 29 to the Hatters in the last three quarters.

“We need to stay composed. We’re looking at the bigger picture here. We’re trying to understand the games coming up. Having to deal with injuries we might to be more selective how we play our personnel, who do we have and when on court.”

“Maybe we’ll try to save some people for the games that we are expected to win. Hopefully we’ll have a full squad soon but we’ll wait and see.”

“I think Sheffield are a team that know what they want to get out of every possession. They are really under control in what they do. They are very physical especially on defence so we’ll see how we respond to that.”

Respond is probably the optimum word for Cacheiro and the Eagles as they face another opponent that will be expecting to come into Newcastle and take away a road win against a probably understrength home side.