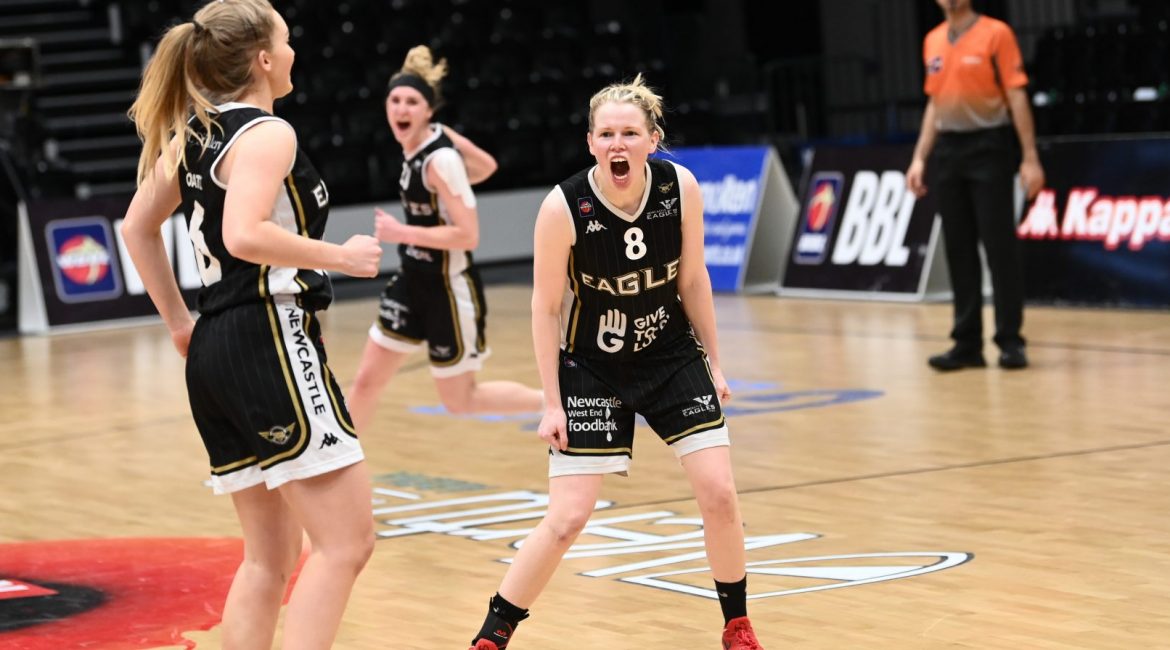 Rachael Bland has revealed her passion for growing North East basketball is stronger than ever after recommitting to Newcastle Eagles WBBL.

And Bland played a full part in Saturday’s behind-closed-doors scrimmage against old foes Sheffield as the Eagles women continued their own pre-season programme.

“I always wanted to come back but every year I need to make sure that I’m in a position to fully commit to my team-mates alongside my full-time job and a PhD,” she said.

“My heart is in the community and in local basketball. That’s never changed.

“And representing Newcastle Eagles in the WBBL offers me a great platform to go on and build the women’s game.

“I feel like I have unfinished business as far as the community side of things is concerned.

“And I’m talking about getting girls and boys involved here.

“It certainly feels as if there’s a momentum shift around the women’s game and it’s an exciting time to be involved in the sport right now.

“I want to play my part in encouraging as many people as possible to watch Newcastle Eagles WBBL this season.”

Bland made her name as a member of Team Northumbria’s WNBL Division Two side as a 17-year-old.

And in 2010 she took her Division One bow after signing for Leeds Carnegie.

The wing returned to the North East at the start of the 2013/14 campaign and heads into her eighth successive season as a member of Tyneside’s only top flight women’s basketball team.

“Of course, what we achieved towards the end of last season made the decision to return even easier,” added Bland.

“When I look back it was amazing that we went all the way to the playoff final.

“When you take into consideration the challenges we faced through the peak of the pandemic and think about the size of our roster it was a remarkable run.

“I was proud to be a part of it and it’s time to build on that playoff experience.

“Just imagine what it will be like to win those big games with fans in the stands. The atmosphere will be electric.”

Bland made 15 appearances for the Eagles last season and averaged 21 minutes in a team that refused to accept defeat despite a disastrous start.

And Bunten has gone on to build a roster of exciting young talents around the experienced 30-year-old as Newcastle bid to go one step further next summer.

“We’ve got a hugely competitive squad and there are top players across the court who are prepared to stand up and be counted,” added Bland.

“Everyone is challenging for court time and a starting five spot. It’s exciting to see.

“There’s a lot of British talent pouring into the WBBL across the board right now and we’re home to some of the best.

“If the game is to grow in the way I want it to then it’s vital that we persuade our best young players to stay and bring more of them back.

“It has a snowball effect. Talent attracts talent.

“The WBBL suddenly becomes the place to be and we get bigger exposure, bigger crowds and greater revenue.”

The Eagles are in WBBL pre-season action away this Sunday afternoon at Leicester Riders and fans can watch live on YouTube.

WBBL Cup Group Stages begin next weekend in an action-packed single-venue weekender for the North Group at Durham University on Saturday 25 September before their first home tip-off of the new season on Saturday 2 October at 7pm.

Tickets details for Durham are set to be announced shortly and fans can take their seats at opening game at the Vertu Motors Arena are available on our box office.