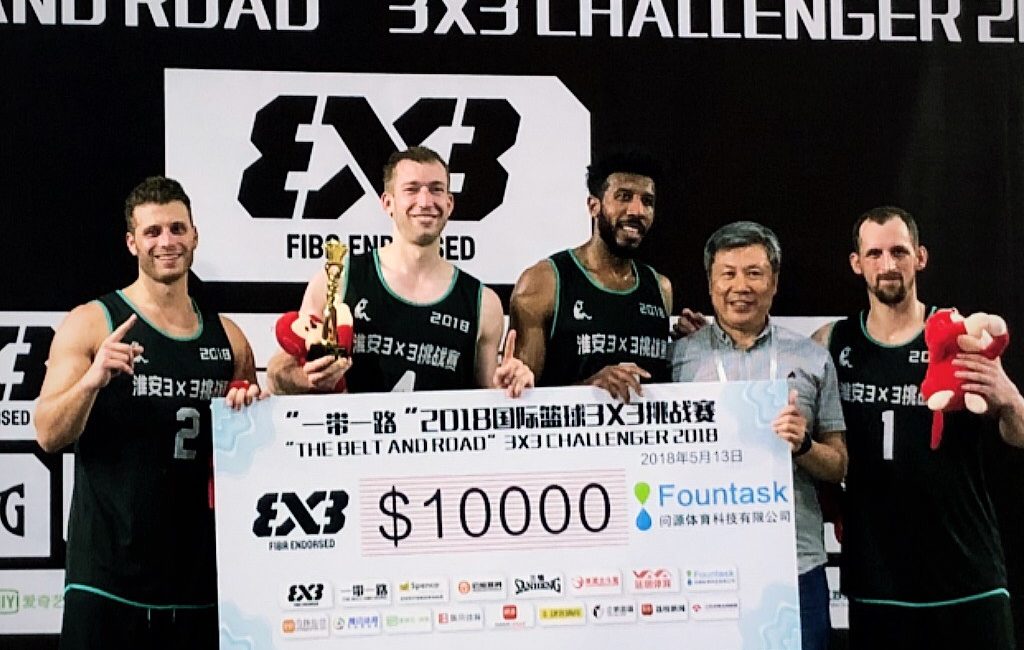 Well, in the first of this blog series I did promise you Part 2 and here it is and pretty much in Kareem’s words as well. All I’ve done is knitted them together and hey, guess what? When I told him what I was going to do he e-mailed me back as Damon, his team-mates and he had that day just played in a 3×3 tournament that day. Kareem takes up the story!

“We just won our first FIBA challenger yesterday too!  This is a big deal in the 3×3 world, we’re taking it by storm! Qualified for another “World Tour” event in Kuala Lumpur with a $30k prize and more points at stake.”

We managed to get a picture so you can all see that they may look a tad older, but both Kareem “The Dreem” and D-Huff still look in shape. Anyway, after reading the FIBA story I, as I said, got in touch and this was Kareem’s first reply.

“3×3 has been a blast. And we really feel like we’re at the forefront of it. It’s a long story, but I (Damon, too) entered into a legacy of 3×3 when we started playing with someone by the name of John Rogers.”

“He founded Ariel Investments, a successful mutual fund, in Chicago. He started playing 3×3 with his friends probably around 30 years ago, and when he and his friends started deciding to step off the court, he began filling spots with recent Princeton players, and by extension, players like Damon who are a part of the greater Princeton Basketball coaching tree (Damon can fill in more details about the specifics of that). “

“Now, 3×3 has become an Olympic sport, and we’re fighting to make it. Because of the system and community that we entered into, and are now helping to build ourselves, we have institutional knowledge of how to play and win and an understanding of the worldwide landscape.”

“The sport is taking off here in the U.S. and has been popular in Europe for quite some time, so I really think the time is ripe to capitalize on this trend.”

“It’s also given me an outlet to play, while I work full time in New York. I never felt like I reached as high as I could have with basketball, but this feels like it’s giving me the opportunity to keep striving. It’s serious, competitive, physical, and there’s a serious goal to work towards.”

“My year with the Eagles woke me up to how good I could be. Fab gave me a lot of freedom to be whatever kind of player I wanted to be, and that changed the way I play. And I think those changes lend themselves to the 3×3 game.”

“Of course, I keep up with the Eagles. I still wish that they were easier to watch, and that the sport of basketball would really take off in England. I’m always happy to see Fab, Paul and Sam Blake’s continual efforts to spread the sport in the country. Coincidentally, I think that 3×3 could be one avenue to do that.”

“We’re very pleased with our success so far. But we’re not stopping there. Winning the USA Basketball 3×3 National Championship two years in a row has been incredible. And it has led to qualifying for more international FIBA tournaments, each of which is a step in the right direction.”

“This year alone, our team has played in Brazil, South Korea, Colorado (U.S.A.), with upcoming tournaments in Shanghai, Saskatoon (Canada), Moscow, The Netherlands, Mexico City, Los Angeles and Seattle (U.S.A.), and several more to be announced.”

“It’s not easy. It’s a ton of travel, it means putting in some long hours at our day jobs, but it feeds that fire to play basketball that just won’t go out.”

After I received that reply I went back and asked Kareem why it took him so long to play professionally after the year he spent in Newcastle. He had three years out before going to Poland for a season in 2016/17.

I also asked him what the future was for Kareem Maddox and he was pretty up front with his answers and even dropped me his Instagram and Twitter handles in case you want to follow him and find out what comes next. Kareem again picks up the story.

“I went back to Poland because I woke up one day and realized that I could still play and missed the game. I went to a camp in Las Vegas, played pretty well and got a deal. Part of it was that I wanted to prove to myself I could really come back after three years and play at a high level.”

“Poland was great. It’s a fascinating place, and the level of basketball was great. The year there was an experience I wouldn’t trade.”

“I won’t be returning to 5×5 in any professional capacity. I love playing 3×3. It’s some of the best parts of playing abroad — traveling, meeting new people, competing — but allows me to live in the states, and work towards some other goals.”

“Who knows what the future holds! I love my job at Gimlet Media, and I love playing 3×3. So, our goal for basketball will be the Olympics until 2020, and my plan for my day job are the usual: work hard, get better, become and expert and move forward.”

“Doing it all at once is a challenge, but you have to hustle while you can! I’m sure I’ll slow down at some point, but I’m going to keep running until I can’t anymore. I do hope to bring 3×3 to the UK soon, though!”

“By the way, we’re documenting all of this on Instagram. I don’t want to be promotional, so feel free to leave this out, but if you want to check us out find us on Instagram! I’m easy: @kareemmaddox. I use twitter sometimes at the same handle, but that’s more my day job updates. So, anyone can reach me if they want to catch up or chat.”

Reading Kareem’s words reminded me of what a great and very intelligent guy he was and it’s great that he took the time out to reply to me in such an awesome way. He’s certainly laid the gauntlet down for D-Huff! And how great would it be to see them back in Newcastle showcasing 3×3?