What A Trophy Win! 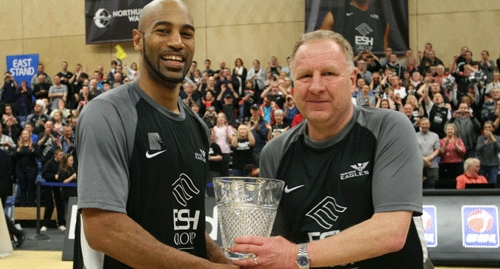 Newcastle Eagles have won the 2012 BBL Trophy Final after beating the UCP Marjon Plymouth Raiders 96-80 in the North East, thereby overturning a nine-point first leg deficit. It is the third time that they have won the Trophy in the last four years, and the fifth time since 2005; it is also their second piece of silverware of 2012 after they beat the Raiders in January’s BBL Cup Final and avenges the bitter memory of the Raiders winning the Trophy on Newcastle’s floor in 2007.

Paul Gause led the Eagles with 19 points and 7 assists, with Andrew Thomson (17), Charles Smith (16) and Joe Chapman (16) scoring ten three-pointers between them. It was an enthralling second leg as the Eagles looked in control after a scintillating second quarter, only to be pegged back before using a decisive surge across the fourth quarter break to win the game. The Raiders, chasing the game late on, shot just 3/23 (13%) from three-point range, while the Eagles, after a slow start, used key three-pointers to decide the outcome.

From the outset, the Raiders picked up where they left off as they scored the first two baskets of the game and kept their hosts scoreless for the first minute and a half, forcing them into an early timeout. The Eagles came out of that with the next 5 points, sparked by a three-pointer from Thomson, before six quick lead changes ensued. Thomson made another triple within the final minute of the period to break a tie at 17-14, only for Jeremy Bell to make two free-throws to knot the teams at 18 in the dying seconds.

Newcastle edged into a three point lead behind Chapman and Gause to start the second, before a 9-2 burst from the Raiders – started and finished by Paul Williams – made the score 25-30 with 6.20 to play in the half. The Eagles, desperate to narrow the deficit from the first leg, were quick to shoot the three-pointer but were 2/9 by this point and 14 points down on aggregate. But they showed their resilience, hitting back with a 20-6 surge of their own, capped by two triples from Smith and one from Thomson, to lead 45-36 and tie the game on aggregate. Amazingly, they took an aggregate lead moments later, 48-38 on the night, on Chapman’s three-pointer. The Raiders resisted bravely, twice putting themselves back into an aggregate lead, but the Eagles pushed on with another Chapman triple making the score 55-41 at the half. The Eagles scored 37 points in the second stanza, winning the last six minutes 30-11 and hitting seven three-pointers for a 50% success rate from beyond the arc.

The teams traded baskets throughout the early stages of the second half, until the Eagles scored 5 straight points to see their lead at 16 on the night, 7 on aggregate, at 61-45. But if they thought they had control it didn’t last long as the Raiders stemmed the flow by scoring the next 8, including 4 for Colbert, to make the score 61-53 and snatch back the aggregate lead. That ultimately became a 14-2 burst and put the Raiders firmly back in the ascendancy at 63-59, 5 up on aggregate. But the Eagles rallied with the game’s decisive run as a 9-2 tear finished the quarter, setting up a decisive fourth with the score at 71-63 on the night, Raiders one up on aggregate.

Gause scored the first basket of the fourth quarter to see the Eagles back in front, and Smith and Chapman hit three-pointers soon after for a 79-65 lead, Newcastle 5 up on aggregate with an 8-2 opening to the fourth and a 17-4 surge over the fourth quarter break. But it was tense from there on in. The Eagles got the lead back out to 16, at 83-67, on a pair of Andrew Bridge free-throws, only for the Raiders to make another run at it to narrow the gap to 89-78 on Bell’s three-pointer and to trail by only 2 on aggregate heading into the final 2.30. It was still that way with 1.24 to play as Fab Flournoy held his nerve to make 2/2 from the free-throw line before Bell and Ojo, on the offensive rebound, missed at the other end for the Raiders. In the final minute Flournoy fouled out of the game and sent Ojo to the line for three shots, only for him to miss the first two and leave the Raiders trailing by 3 with 58s to play. The Raiders stole the ball on the next possession, only for Williams to miss and Jones to miss after grabbing the offensive board; Jones fouled Thomson, who made 1/2 at the line and the Raiders failed to connect on two three-pointers, after grabbing yet another offensive board – the third time they had missed out on second chance points in the final 1.10 of the game. Bridge made 1/2 and Smith 2/2 inside the final 10 seconds to seal the game, as the Raiders couldn’t score in the final minute.