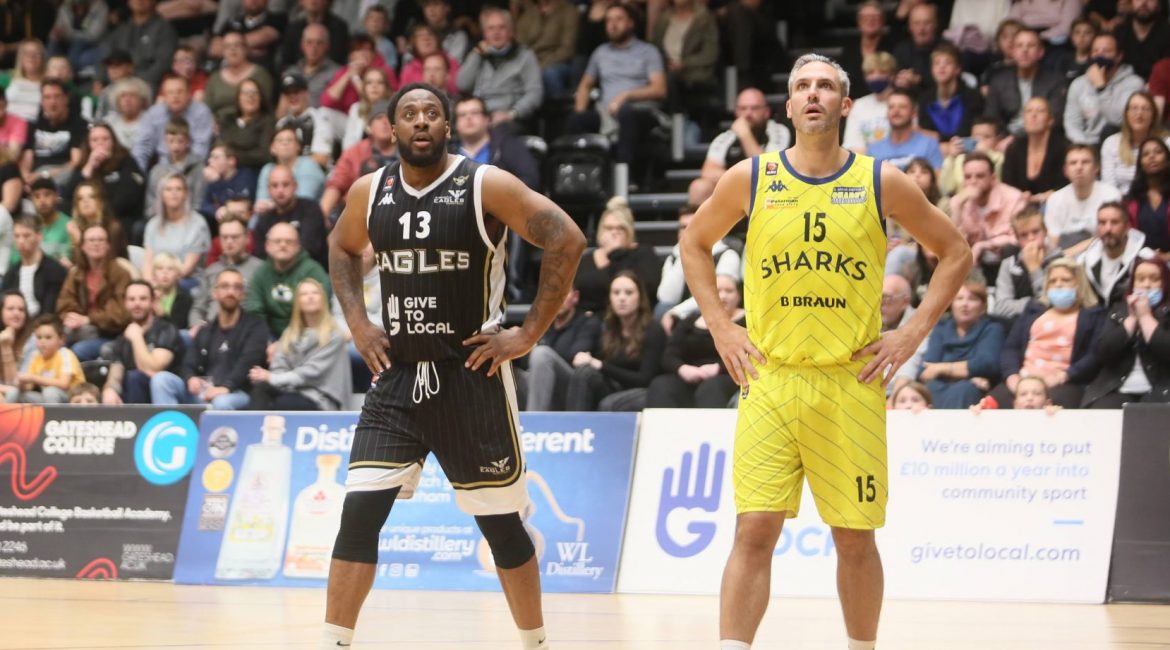 Darius Defoe resumes his personal duel with off-court pal Mike Tuck this week after insisting he has no friends in the heat of battle.

And although Defoe is full of praise for fellow veteran Tuck, any mutual respect will be parked during a game neither side can afford to lose.

“On the court I ain’t got no friends,” insisted Defoe, who won Sport Newcastle’s top honour at last year’s annual awards event recognising the biggest stars of North East sport.

“When I cross the line it’s all about what happens inside those lines over four quarters and I don’t care about friendships or reputations.

“Mike’s the same. We first locked horns in the late noughties and we’ve been going head to head ever since.

“Me and him go way back and I always enjoy coming up against him in the heat of the BBL battle.

“We’ve always got on well off court but when that first whistle goes neither of us wants to give an inch.”

Earlier this month Tuck passed Todd Cauthorn’s club record 4,252 points in a Sheffield vest with a timely three-pointer against Surrey.

And on the same night the veteran forward and part-time Sky Sports pundit hauled down his 2,500th rebound.

Defoe, meanwhile, is closing in on 6,000 points for the Eagles — a figure he’s on target to reach before the end of the season.

“It was great to see Mike get that record and it’s always fun playing against him,” added Defoe.

“His biggest strength is the ‘pop and pick’ and that’s always made him difficult to defend against.

“It’s tough but it’s fun. You want to test yourself against the best and Mike has been one of the best in this league for a long, long time.”

Defoe is the subject of a new short film, produced in association with the Eagles’ venue sponsors Vertu Motors, that premieres on the club’s website this week.

The Dominican-born, London-raised baller describes how he initially dallied over a transfer to Tyneside before his mother insisted he make the move.

And Defoe reveals how he ignored former coach Fabulous Flournoy’s repeated calls to bring him north — almost missing out on a move that would ultimately see his name carved into Newcastle’s sporting history.

“In the end it was my junior coach who told me Fab was trying to offer me a contract,” he explains.

“The former Eagles guard TJ Walker had seen me play in a youth tournament in Newcastle and told Fab he’d be silly if he didn’t try to sign me.

“But I was only 18 and wasn’t sure about leaving home. I spoke to my mum and she told me to get out of London!

“London is my home but Newcastle is my ‘home home’.

“I’ve met a lot of people through the Eagles Community Foundation’s Hoops 4 Health programme and kids often come up to me in the street after I’ve visited their schools.

“As long as I see the excitement on their faces then I’m happy.

“But wherever you go in Newcastle people are sports mad — whether it’s football, cricket, rugby or basketball.

“All they think about is sport. They love talking about it and they’re so friendly.”

And after improved offensive displays against title contenders Manchester Giants and London Lions, Defoe and co. know they need to knuckle down on defence at the Sharks’ Ponds Forge home.

Newcastle are still without injured duo Louis Sayers and Daniel Johnson-Thompson with head coach Ian MacLeod expected to go with the same group that narrowly lost to London last month.