Trey on the Tyne

Newcastle Eagles/News/Trey on the Tyne 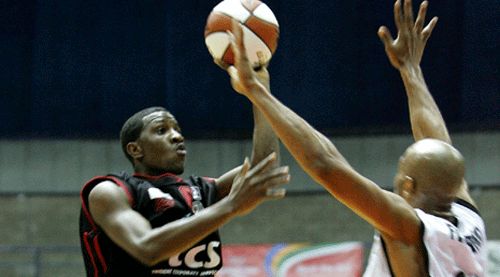 Former BBL Player of the Season Trey Moore has been added to the roster of the Newcastle Eagles ahead of the forthcoming 2008/09 season.

The 33-year-old Mississippi State graduate will help the Eagles defend their BBL Championship title, a piece of silverware that Moore has already experienced winning during his first spell with the BiG Storage Cheshire Jets back in 2004/05.

During that stellar season, Moore averaged almost 23 points, over 4 rebounds and 5 assists per game. He returned to the Jets last season, after a season in China and a spell with Strasbourg in France, and once more he averaged in excess of 20 points per game. The 6’4″ Houston native first came to the BBL with Birmingham in 2003.

In fact, the last time that Moore competed on the MetroRadio Arena floor was on the 8th April 2005, when his awesome 33 points led the Jets to a 94-96 win over the Eagles that all-but secured the BBL Championship title for his former club that season, as Fab Flournoy’s Eagles were runners-up. The Eagles avenged that defeat three weeks later as a 78-75 win at the National Indoor Arena saw them win the first of three consecutive BBL Championship Playoff crowns; they were led by 27 points from GB star Andrew Sullivan, whilst Moore managed 20 points in defeat.

Eagles’ Managing Director Paul Blake explained why the club has plumped for Moore.

“We are looking to bring in some young and exciting players this season as we re-shape parts of the team in our bid to continue evolving and competing for league titles.

“Part of our strategy is to ensure that we still have experience in all areas of the court and in that respect we felt that we needed someone with experience and quality in the back-court.

“Trey fits the bill perfectly for us and will be just the kind of player who can not only score from anywhere but also provide some leadership on the floor.

“He has played in different leagues which is good for us because we get a veteran player who can adapt to different styles and brings that experience, but we also get someone who has proven himself at the highest level in this league.”

He added, “To have two BBL Players of the Season in the same team next season – Lynard Stewart and Trey Moore – will be great for the club and for our fans. If we get the right younger players in to add to that then exciting times are set to continue.”

“Trey is a proven winner and someone who will give us experience and versatility. He can play a combo role if we need him to and his flexibility on the court is important for us.

“We could have a whole new backcourt this season and we have to make sure we get the right balance and I know that Trey will give us that and most importantly he is a quality basketball player.

“We can’t wait for him to join our team and we know he will work hard to make sure we keep competing for trophies and remain at the top.”

Further player announcements are imminent with Blake and Flournoy eager to recruit the team earlier than in previous years due to Flournoy’s desire to extend his pre-season to prepare even harder than usual for another tilt at BBL silverware.