Trey Moore Is BBL Player of the Year

Newcastle Eagles/News/Trey Moore Is BBL Player of the Year 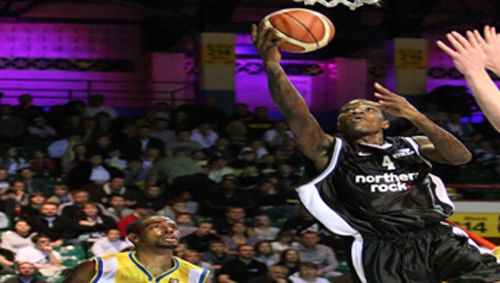 Newcastle Eagles’ Trey Moore has became the only the third player in the 22 year history of the BBL to win the Molten Player of the Year award for a second time.

The 33-year-old point guard won the league and finished runner-up – ironically to Newcastle – in the play-offs with Chester Jets during the 2004/5 season, and collected the BBL player-of-the-year as well.

It is the second individual award that Moore has collected this season as he was named MVP following Eagles 83-71 victory against Guildford Heat which saw them win the BBL Trophy. Moore finished with 28 points as the Eagles continued their fine record in the competition.

Moore was a happy man after being told he had edged out Everton Tigers’ Andre Smith to win the award: “I’m very excited about it, though I’m more happy about how the season went for the Eagles than individual awards. At the same time, though, it’s good to achieve personal goals. It’s been great to win the league and the Trophy, and I’m thrilled to be part of the Newcastle team.”

The Eagles guard is enjoying his time with the north east club: “I’ve definitely enjoyed my time with Newcastle. It’s a great team, and Fab and guys have worked hard every day as we try to improve. We’ve definitely improved during the season, and we’ve stuck together well.”

Eagles coach Fab Flournoy is pleased to see his player win the award: “I’m extremely happy for him, and I think it’s a great feat for him to leave the BBL as MVP, and win it again a couple of years after coming back. I think when Lynard [Stewart] won it last year it was pretty much a forgone conclusion, but this year he had to contend with Andre Smith and it could have gone that way. I wasn’t allowed to vote for him, so it’s a testament to his all round play. It’s not the amount of points he’s put up, but being able to do other things for the team. I’m sure he’ll be thrilled with the accomplishment, and he really deserves it.”

The full teams is as follows: