TIME ON TYNE FOR TONEY

Newcastle Eagles/News/TIME ON TYNE FOR TONEY 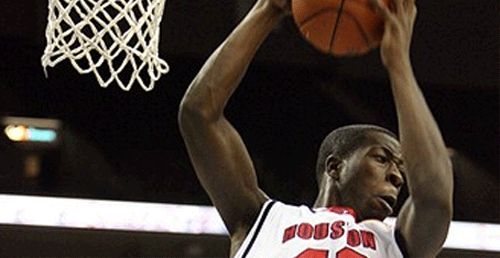 Newcastle Eagles are delighted to have added 6ft 8in Tafari ‘Tap’ Toney to their squad for the forthcoming 2008/09 BBL season.

The league champions have clinched the signature of Toney who has graduated from the University of Houston where he averaged 6.8 points and 6.3 rebounds during 21 minutes per game for the Cougars in what is a highly competitive College conference.

Toney is the second new face brought in by player-coach Fab Flournoy and becomes the third forward on the Eagles roster forming a front-court trio with Lynard Stewart and Darius Defoe who both return from last season.

Toney grew up in Brooklyn and Flournoy who was also raised in New York is excited at getting the chance of working with his new player.

He explained “Tafari can be an exciting player for us because he is very fit and extremely athletic with real size and presence on the court from his physical attributes.”

“As with any rookie player coming into the league it is a tough initiation but we have high hopes for him because he has shown at College that he isn’t afraid to be aggressive.”

“He can dunk the ball and block shots while he is solid on defence and that is very important for us.”

“He is also willing to step outside and hit shots and so if we keep his confidence high and mould him into our system, he will be a key player for us in time.”

“I have spoken with him for quite some time during the summer months and I like what I have heard from him and I am hoping he will be a great fit for the team on and off the court.”

Eagles MD Paul Blake meanwhile expressed his own satisfaction at landing Toney who had one of his best games of the season against the Memphis Tigers and against number one NBA draft pick Derrick Rose and NBA draftee Joey Dorsey.

“We have tracked him for quite some time now and it is a relief to finally get him signed up.”

“With Trey Moore someone we are all looking forward to seeing for the first time at the Arena, we now have a new big guy in and it is always exciting when we sign new players.”

“Having had such a settled team for so long, I know the fans will be eager to see what the new players like Toney can do.”

“If he produces what we know he is capable of then we could have unearthed a real gem. Importantly though, he is only 21 years of age so we must remember this and give him time to adapt to the pro game. His production could take a little time but the talent is there.”

“He has the potential in the future to be a real favourite with our fans who have always enjoyed watching their athletic forwards going back to the likes of Donnie Johnson, Niki Arinze and Shawn Myers.”

“Things are coming together nicely and we just have a couple more decisions to make on senior players and if we tie down some of the younger guys, we will have recruited our team earlier than we have ever done before.”

“That can only be good for Fab and for the team as they prepare for the new season.”

At least one further player announcement will be made within the next week.