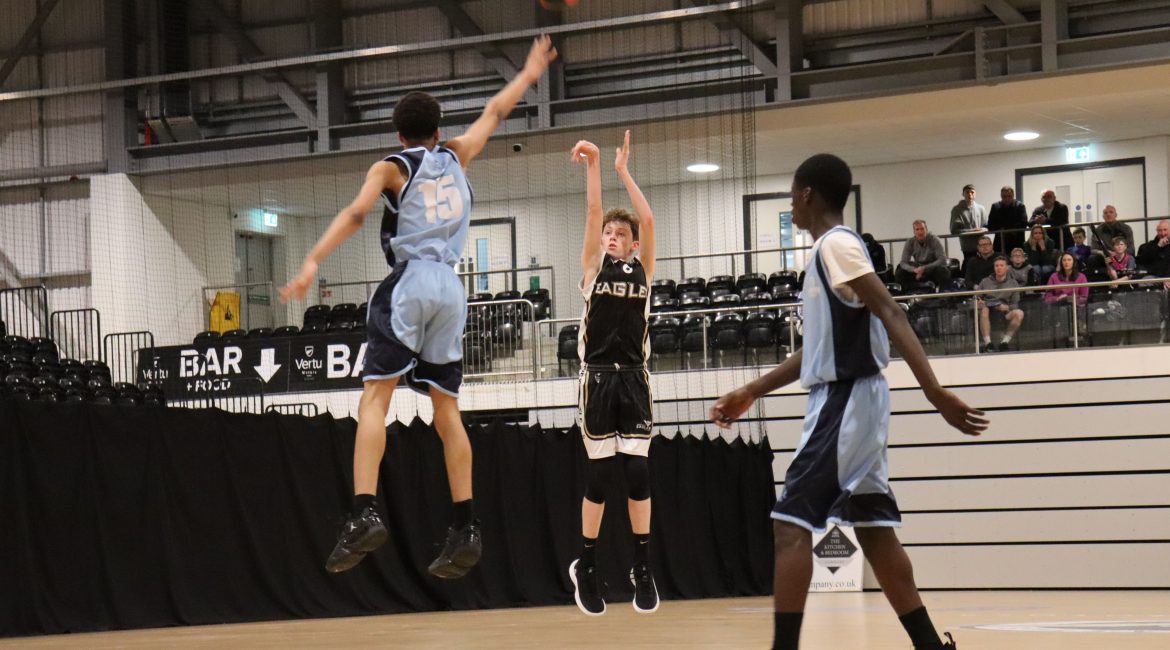 A ‘culture of togetherness’ has catapulted Newcastle Eagles’ Under 14 boys into this season’s Junior NBL playoff quarter-finals.

That’s the verdict of proud playcaller Chloe Gaynor after in-form Newcastle lined up a last eight clash at London’s Baltic Stars this weekend.

For the first time in Academy history, the Eagles had three teams punching their tickets for the first round of the post-season party.

And the Under 14 boys led the way with a brilliant 70-63 victory against hotly-fancied Lewisham Thunder.

“Last weekend’s win exemplified who the boys are as a group,” explained Gaynor.

Eagles Backcourt Can Boss The Big One
December 10, 2022

“The culture of togetherness and fighting for one another is the true strength of this group and is the thing that has won them games in the tough moments.

“Everyone showed up and contributed to the win against a very solid Lewisham team.

“Thunder were a lot bigger than us and walking into the arena I told the lads that they were going to have to play big and play together to get the job done.

“That’s exactly what they did.”

Tough first round losses for the Under 16 boys and Under 14 girls failed to take the shine off what has been a landmark campaign for Newcastle’s rising stars.

And Academy bosses can look back on the regular season with pride as they start plotting for the new term and the continued development of boys’ and girls’ basketball on Tyneside.

The Under 14 boys led from start to finish against a fast-paced Thunder with a Jakub Bobkowski three-point play setting the tone for a terrific afternoon’s entertainment.

Five Eagles scorers underpinned a 15-13 first quarter lead and it was Luke Tucker who extended the home side’s lead after the restart as he fought his way to the basket.

Aston Hall and Leo Glaholm added their first points of the game before the half and Newcastle took a deserved nine-point lead into the locker room.

Thunder came out of the interval the stronger of the two teams but a Gaynor timeout breathed new life into the Eagles.

And the home side extended their lead to 14 points with 10 minutes remaining.

Tucker and Leo Degnan Potter denied Lewisham the time and space to launch a serious comeback down the stretch.

And George Merrifield set the seal on a superb win with the final points of the game to set up Saturday’s trip to the capital.

Calvin George called time on his coaching role with Newcastle’s Under 16 boys as the Eagles slipped to a tough loss at Sussex Bears in round one of the Junior NBL playoffs.

The longest trip of the year was always going to provide the stiffest of tests for a roster that confounded the critics to place third in the regular season.

And George couldn’t be prouder of his battling side as a committed team did everything but win in what turned out to be the popular playcaller’s final Under 16 fixture.

Sussex stretched out to an early 8-0 lead before the visitors rallied to lead by four after a free-flowing first quarter.

Big triples from Akeem Johnson and Tobi Dawson kept Newcastle’s noses in front after the restart but a 13-0 Bears tear in the final three minutes of the half proved to be a game changer.

Ollie Finlay and George Stephenson sparked an Eagles comeback after the break as the visitors reduced the deficit to nine points heading into the final period.

But Sussex stood firm in the face of some serious Newcastle pressure to close out a 75-60 win down the stretch.

Things weren’t any easier for Newcastle’s Under 14 girls as Ellen Totton’s side faced the unenviable task of a first round playoff clash at big guns and title winners Manchester Mystics.

The hosts headed into the fixture as hot favourites and lived up to the hype with a dominant display against the Eagles.

The Mystics controlled the game from start to finish and converted a 44-22 half-time lead into a convincing 87-37 win.

But Newcastle can look back on a superb regular season showing with pride after sealing an impressive 12-4 record behind Manchester’s dominant first and second teams.

“It’s been a great season for our Academy sides and I’d like to thank our coaches, team managers, the players and their parents for contributing to such a memorable campaign,” said Susan Hunter, Chief Operating Officer, Eagles Community Foundation.

“All three teams have exceeded expectations and underlined the group of talented players we have coming through at the Academy right now.

“To have all three teams qualify for the playoffs is a fantastic achievement and everyone’s fingers are crossed that Chloe and the Under 14 boys can extend the season beyond this weekend.”