The Prince Announces His Retirement 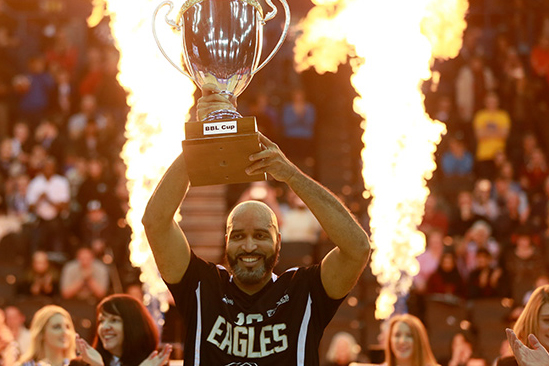 It’s the end of an era for the Esh Group Eagles and the British Basketball League as “Prince” Charles Smith announces his retirement from playing, calling time on his glittering time in British basketball as a player.

In a phenomenally successful career that spanned 14 years in The BBL and 3 separate periods at The Eagles, Charles Smith became a legend within his lifetime with the huge numbers he put up, his game-changing abilities and his incredible 21 winners medals and also 11 runners-up across that period.

Announcing his retirement, Charles had this to say;

‘First and foremost, I would like to thank God for blessing me with the ability to play basketball and the work ethic to turn my ability into a great career that has spanned 20 years and 4 continents. I want to thank my family for all their love and support throughout my career. With that being said, it is time for me to bow out gracefully, as I have decided to end my professional basketball career.

I’m not leaving because I can’t do it anymore, I’m leaving because my mind is telling me it’s time, and I’m looking forward to starting the next chapter in my life. It has been an honour to meet so many great people and to see so many beautiful places that without basketball wouldn’t have been possible and I feel truly blessed to have had so many great experiences.

The one place that has felt like home from day one has to be the Newcastle Eagles, I would like to take this opportunity to thank Paul Blake, the rest of the Newcastle Eagles organisation and the fans for a fantastic 14 years. Over this time, we have grown together both on and off the court.  It has been wonderful being part of building a great franchise and helping bring so much success to a club that truly deserves it.

I would like to thank them for believing in me as a player, as a person and for treating me as part of the family from the start. Finally, I want to wish everyone at the Newcastle Eagles continued success for many seasons to come. Thank you for making so many of my dreams a reality!’

Individually he ranks 3rd in the all-time BBL scoring charts with his 436 games cumulating in 7,048 points at an average of 16.17 per game. He is 3rd in three-points attempted on 2,002 with his 767 made shots giving him 4th place overall.

Add in being 5th in overall field goal attempts, 6th in steals and 10th in defensive rebounds at 4.08 per game and it’s not hard to see why, if there was one, he’d be a shoe-in for a BBL Hall of Fameslot. He will no doubt be afforded a place in The Eagles own Hall of Fame very soon.

Eagles Head Coach Fab Flournoy paid his own tribute to a player he coached, a team-mate he played with.

‘Words are not enough to describe the levels, the depths and the impact that Charles Smith has made in the game.

Quite simply Charles Smith is the greatest scorer that I have ever played with! He is one of the greats in British Basketball. The way Charles played on court made you wonder how his performance was possible, it was unbelievable. It was amazing to see, just legendary.

I was very fortunate to be his coach and to have the honour to play with him. Charles is a once in a generation player. His achievements will speak for themselves in the years to come – the story of how Prince Charles graced our city with unprecedented success and trophies!

On a very personal note I have to thank Charles for all he has done for me and the club. The success we have would not be possible without him. The end of the greatest era in the clubs history! There is a part of me that will not be the same, Charles has given me some of my greatest basketball memories and from the deepest part of me I truly thank him’.

The man that employed him over so many of those years, Eagles Managing Director Paul Blake also had this to say.

‘It’s hard to know where to start, Charles has had such a significant impact on our trophy success over the years, I can’t name too many other sportsmen or women in any sport that have stepped up and taken over in the really big games to help the team win in the way Charles did on a regular basis.

There are so many games to mention but if you were to ask for one in particular it would have to be the Cup Final in 2011/12 when Charles went for 37 in the first half, a flawless performance that is rare to see, but one that Charles repeated in different ways in so many finals over a decade.

Charles will be a huge miss for the club, league and sport but his performances will always be there for fans to watch, he has left an incredible legacy which will be hard to follow.

The club has only previously retired one shirt in its history, TJ Walker’s No.5. We will be retiring the Charles Smith No.10 in recognition of his achievements in what has been a golden era for the Eagles.’

They say that all good things must come to an end and that statement has never been truer with Charles Smith’s retirement. It’s going to be strange for everyone at The Eagles Organisation to go into a season without a player that has so long be a talisman.

That’s also true not just of his beloved Eagles fans that will no doubt miss his unique presence hugely on and off the court but of all BBL fans, players and coaches across the country who acknowledge and respect what he has achieved in the game.

Although you can suspect that some of those may also sigh a collective breath of relief at no longer having to face such an awesome opponent. In a sport where players move on and about so frequently it is a credit to Charles Smith that his abilities, commitment and attitude kept him at one club for so long.

We may not see the likes of “The Prince” again and all at Esh Group Eagles Newcastle and within The BBL wish him good luck and fortune in what hopefully will be a long and happy retirement.