The Eagles and Esh Group: A Winning Combination 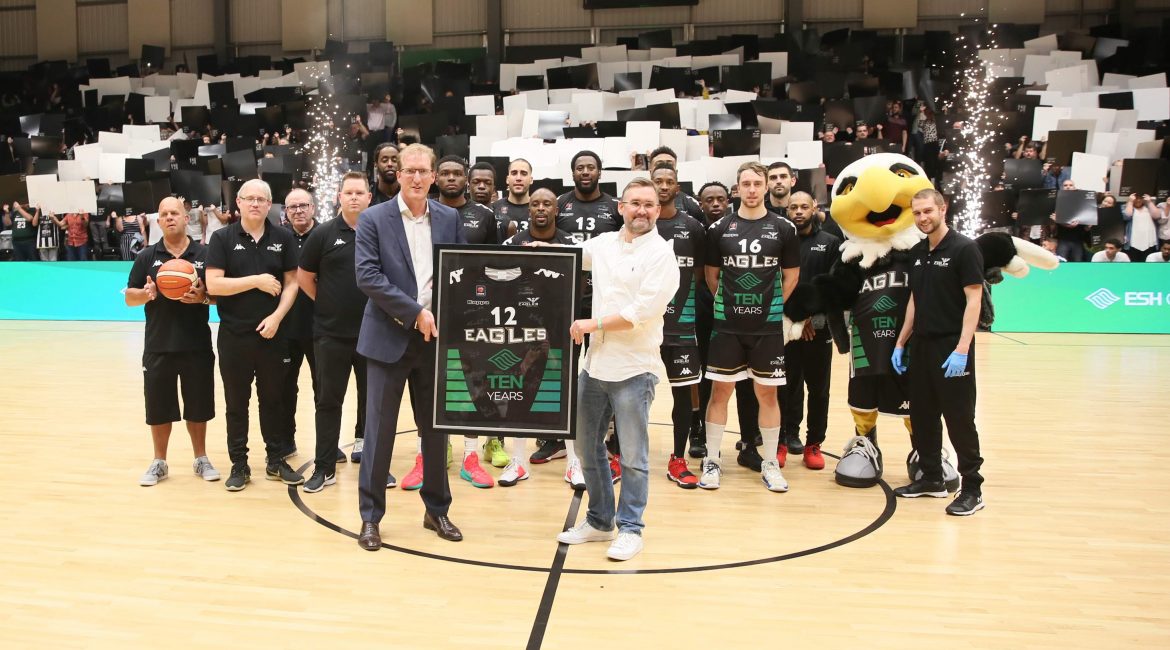 In 2010 treble winners Newcastle Eagles found a new home, a new focus and – crucially – a new partner. A decade down the line and Esh Group is about to embark on its 10th consecutive campaign sponsoring British basketball’s most successful club.

A quick glance at the history books reveals the true value of an innovative partnership that continues to impact positively on the region’s basketball community on and off the court. During the last nine seasons Newcastle have won 11 trophies – including two clean sweeps – and our friends at Esh have been there every step of the way.

They were in London in 2013 to see Fabulous Flournoy’s men run out at Wembley Arena for the very first time. And two years later Esh were out in force as the Eagles defeated London Lions in the BBL Playoff final in front of a record 15,000 fans in the capital’s O2 Arena – the victory which secured a third clean sweep of domestic titles.

But the partnership’s biggest success to date was celebrated earlier this year when the Eagles Community Arena opened its doors for the first time. Esh Build anchored the project from start to finish – transforming a derelict piece of land off Scotswood Road into a state-of-the art home for the club’s BBL and WBBL teams and the Eagles Community Foundation.

And it is entirely fitting that the Brian Manning Suite – the focal point for VIP match night entertainment at the ECA – is dedicated to Esh Group’s much-missed former chief executive, whose support for the Eagles knew no bounds.

“In many ways it only seems like yesterday that we signed that first sponsorship deal with ESH Group and who could have predicted the remarkable journey that we’ve followed together,” said Newcastle Eagles’ managing director Paul Blake.

“Esh are more than sponsors – they are part of the fabric of the club and key to our past, present and future. It’s impossible to overstate the value of their support to Newcastle Eagles and the Eagles Community Foundation and I am delighted to be celebrating the 10thanniversary of a very special partnership.”

Last night the Eagles will further strengthen that relationship by running out against the Cheshire Phoenix in a specially designed commemorative kit – featuring a green and black vest bearing a ‘Ten Years’ chest plate.

Andy Radcliffe, Esh Group’s chief executive, said: “Through hard work both on and off the court Newcastle Eagles have become the most successful club in British Basketball history, moved into a purpose-built arena and established one of the most inclusive, interconnected and well-respected Community Foundations in the North of England.

“We’re celebrating a decade of community, friendship and success on and off the court – something we are both immensely proud of.”