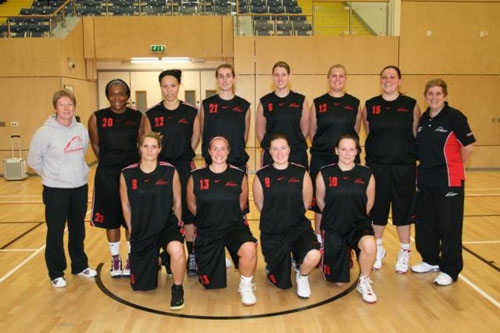 And after Carr motored to a 31-point debut in the 89-54 defeat of Sefton Starlights TN’s playcaller admitted: “She looks like the real deal.”

National Cup rules decree that clubs can use only one US import and it was Carr who got the nod over fan favourite Ta’yani Clark at Sport Central.

And Hayes added: “It was the perfect opportunity to see Cat in a competitive situation and another chance for her to get used to the rotation and her team-mates.

“In my experience the players who come over from the States need a week or two to get used to what the referees expect and the style of play in this country.

“Cat’s got that experience early on and before the real business of the league season gets underway.

“But she’s a quality player and that’s clear for all to see. She’ll be a real asset for this team.”

TN cruised past Merseyside-based Division two outfit Sefton to avoid a repeat of the embarrassing cup exits of pervious seasons.

And it was Carr, who added eight boards, five assists and five steals to her game high points haul, who led the way.

“I’ve been tracking Cat since the end of the college season in April,” added Hayes. “She was recommended by a personal contact and I made the approach.

“I’m not a big fan of dealing with agents and like to do these deals myself as much as possible.

“As a Division Two player it’s possible Cat fell under the radar of a lot of clubs but she’s an All-American and looked a class act.”

“Around the league everyone has strengthened and our first league game couldn’t be tougher with Sheffield up next weekend,” added Hayes.

“Quite a few of the top division teams have spent a bit of money to bolster their rosters.

“But at this stage of the season I’m quite confident with the squad we’ve got and I feel we’re in far better shape than at this point last year.”