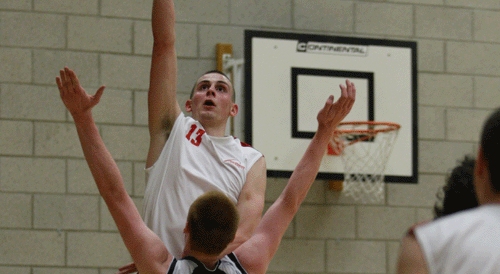 Marc Steutel admits Team Northumbria will have to be firing on all cylinders in the capital this weekend if the early-season pacesetters are to stay in pole position for promotion.

And Steutel feels last weekend’s fiery encounter against Glamorgan Gladiators was the perfect preparation for another test of TN’s title credentials.

“My guys kept their cool in the face of some tough situations and Glamorgan won’t lose too many times this season,” said the big Scouser after the Sport Central club bagged an 84-77 win.

“They beat Westside by a couple of points in Wales and I think all three teams will be pretty evenly matched this season.

“We’re travelling to face a team with a 4-1 record and they’ll feel they can take any side.”

In a clash bursting with incident Gladiators’ playcaller Steve Williams ultimately took his team name too literally after spoiling for a fight with referee Simon Unsworth.

And an ongoing verbal battle between the Wales national team coach and the EBL officials resulted in his ejection seven minutes from time.

Williams retreated to the stand only to be asked to leave the building. And after failing to exit at the third time of asking he was forcibly removed by security.

“The ejection came at a bad time for us because we had the momentum and the game was stopped for a couple of minutes,” added Steutel.

“Credit to my players – they retained their focus and closed out the win.

“The referee had warned both sets of players about talking out of turn after their coach picked up his first technical foul and I had no complaints with that.

“Simon is a respected referee with good game management and he is an official who encourages constructive communication with the coaches.”

TN were up 23-18 after the opening quarter – by which time Williams had already entered into his game-long argument with the officials.

But the Gladiators took the second quarter to lead 42-38 at the half and spark fears of a first league defeat of the season for promotion chasing TN.

Steutel revitalised his troops during the break and the hosts had carved out a seven-point lead heading into the final quarter.

Still leading by the time Williams was booted off court, TN maintained their advantage against a team left rudderless in the absence of their coach.

But Steutel added: “It was a strange win.

“The lads feel a little deflated because although we won by seven points we didn’t do ourselves justice.

“We want to be the best we can. Jamie Glen played amazingly on the offence but his defence still needs work.

“Jack Thompson also had a really good shooting game and mixed things up for us but overall we had a very strange defence.”