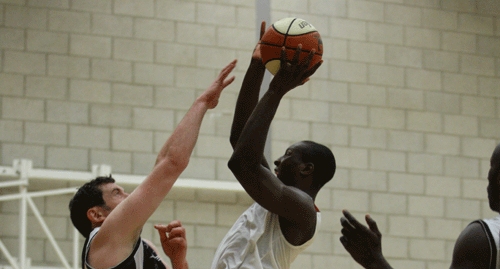 After losing their first four league fixtures on the season – including a 77-72 reverse at home to Northumbria – Mets have reeled off eight consecutive wins, remaining unbeaten for two and a half months.

Their winning streak started with a victory over local rivals Birmingham A’s on November 15 and includes impressive victories over title contenders Hemel Storm and Glamorgan Gladiators.

Franck Kouagniakandoum has been a large part of the streak. He averages 20.82 points and 7.73 rebounds per game and is a highly efficient scorer, converting 68.79% of his two point attempts. He has scored at least twenty points in each of Mets last four wins after finishing last season as the fourth top scorer in Division 3.

Team Northumbria have lost only one league fixture this season – an overtime defeat at Hemel – and are clear at the top of the table with a 12-1 record. A win over Mets will see them as strong favourites to win the league title with Hemel and Glamorgan both having already lost three games as their closest rivals.

The success of Team Northumbria is a key to Eagles Team Northumbria development pathway according to Eagles Managing Director Paul Blake; ‘ We have been working in partnership toward the goal of a BBL and EBL 1 team as part of our structure for many years now and it feels like it is finally close to coming together. We will be the first Mens programme in the country to have achieved this if it happens this season. Marc and the team have done a fantastic job, especially given the average age of the squad.

The men’s success this season represents a swift turnaround from an 8-12 record in 2010/11 and an exit at the first round of the playoffs. New additions Ivan Emanuely (15.46ppg, 6.23rpg), Siman Stewart (13.00ppg, 10.38rpg) and Kevin Wollbrinck (12.86ppg, 7.29rpg) have had a big impact this season, but with local youngsters Jamie Glen and Ross Wilson also averaging double-figures for points and Nils Steuber and Jack Thompson averaging more then 9 points per game, their success can be said to be a true team effort.

Northumbria coach Marc Steutel is excited about the game: “This is a game that we are really looking forward to and after the first time we played them in the league we knew that they would go on a run of games before the return game.

“They are on a great run of form currently to have got to the position that they are in and Coach [Stephen] Barnes has to take a lot of credit for that. We know how they will approach this game and my players are relishing the challenge.

“Franck Kouagniakandoum is a difference maker and would be for any team in the league. He is playing a big key role for the Mets now and we know we have our hands full. However, they are not a one dimensional team as they have a lot of guards who can hurt you from the three point line. We will have to continue our strong, cohesive, own brand of team defence to give ourselves the best opportunity of succeeding.”

“It is difficult to single out any of my players, but credit must goes to our two of our younger players Lamar Morrison and Ross Wilson. Both of these players have come through the AASE programme at Tyne Metropolitan College. They have made a huge impact at the senior men’s level in their first full season and really epitomise the philosophy of our club. They are also having success with the BBL league leaders Newcastle Eagles which is a massive positive for our programme, offering elite level British players the opportunity to develop in the UK at the highest level. Jamie Glen also came through this pathway.

“We really expect this to be a battle on Saturday against a very well coached and competitive Mets team. After a couple of excellent training sessions this week I know my players will be itching to get out on the court come Saturday. We are really excited by this spectacle of good Division 2 Men’s basketball.”

Coach Barnes is also expecting big things form this game: “The game this Saturday is the kind of game I live for. Northumbria will be our toughest challenge yet as they are of the highest calibre having only lost one regular season game.

“We know this is a big game for us and could mean the difference in us challenging for first/second place at the end of the season, instead of fourth/fifth in a very tight league. We are a team committed to each other and we are no stranger to having 4 or 5 guys in double figures. We are hungry to put right our loss early in the season and continue to push ourselves up the table.”

In the first league meeting this season Kouagniakandoum amassed 30 points on 14 of 19 shooting, but Northumbria won the final quarter 28-17 to win by 5. Northumbria also defeated Mets in a Patrons Cup group game in Birmingham 80-78 when they held Kouagniakandoum to six points.