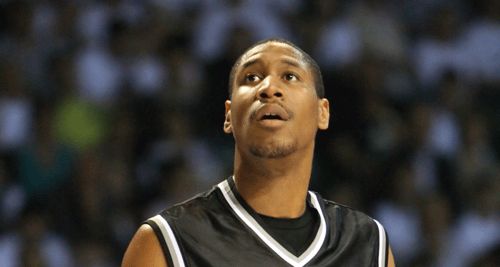 with only 7 days remaining to the eagley awaited Team GB fixture at Northumbria University, the local journalists have been in good form. Over the next few days these articles will appear on this site.

We are extremely grateful to be able to do this and must thank Mark Douglas for his excellent coverage of this story and The Journal and the Evening Chronicle for their superb backing for basketball in the North East. Without them it would be very difficult to keep everyone up to date with what is happening.

This first article was written by Mark Douglas and appeared in The Journal as long ago as July 14th 2010. It must be stressed that the views expressed are those of the author and are not necessarily those of the club.

Team GB start their EuroBasket 2011 qualifying campaign against Macedonia at Northumbria University’s new purpose-built indoor arena on August 8 – but will be without injured NBA star Gordon and Unicaja Malaga centre Freeland, who both pulled out of the squad yesterday.

The national side need to assert themselves against the lower-ranked European nations to be sure of a place in the 2012 Olympics – and one way of earning their place in the London games is to qualify for the European Championships in Lithuania. GB skipper Sullivan accepts it will be a tougher ask now they have lost Freeland, who has been a regular for his country over the last two years, but feels they have enough to make it through their summer fixtures.

He said: “I was disappointed we lost Joel because he is a big player on our team who has performed key roles.

“Luckily we still have a strong squad but it will not be easy in this group. Everyone seems to be saying we are favourites, but it is up to us to perform.

It is also a historic one for North East basketball, with the region set to host an international for the first time.

Having long argued Team GB should experience a Newcastle crowd, Sullivan is naturally delighted with the venue.

He added: “It is brilliant for Newcastle basketball and it a great thing for me because this is my second home. I know Newcastle have one of the best crowds in the country and I know the region will get behind this game as well.

“It is a fantastic opportunity for the North East to see the team and I am sure they can be a big advantage for us.”