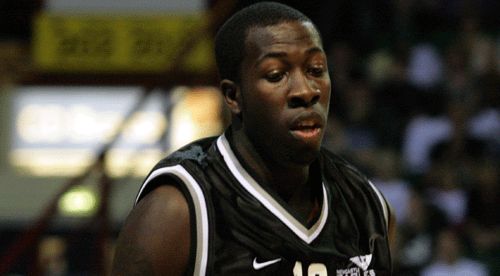 Newcastle Eagles’ forward Tafari Toney has continued his fine season by being picked for the 24-man Great Britain training squad.
The 22-year-old is in his rookie year as a professional basketball player having graduated after four years at the University of Houston. In his final college season he was ninth leading rebounder in the prestigious Conference USA last season, and fifth in offensive rebounds. This season has seen him average 9 points and 7.3 rebounds per game as well as one block and a steal as he played in all 33 BBL Championship games for the Eagles.

Toney is joined in the Britain squad by Everton Tigers point guard Richard Midgley and the currently injured Flinder Boyd of the Jelson Homes DMU Leicester Riders. Former Eagles Steve Leven is also included in the squad as GB prepare for their final appearance in the European Championships.

Newcastle player-coach Fabulous Flournoy is delighted for his player: “This has been a great year all round for the Eagles, with team and individual achievements. It’s a huge achievement for Tap, having come in as a rookie and it was questioned whether he’d develop into the player we wanted. I think that from November/December time he’s started show and has developed from a bit-part player to being a major part of our success.

“He’s put up some good numbers, but more importantly he’s shown consistency over the last few months, and it’s tremendous that he’s been picked for the Great Britain team. It’s another year that we’ve brought some talent through to help the GB team. “

Former Eagle Drew Sullivan is pleased to see the Londoner in the squad: “It’s great we have a guy out of the BBL who Chris views as a possible help to us. We want guys from our home country’s league representing the team because they are players that fans here are watching week in week out. I have seen Tafari play and it will be hard work for him to make the final team, because there will be other big guys who have been playing at a very high level this season. But then again the guy has hit 20 rebounds in a game and no matter what league you’re playing in you can’t argue with that sort of stat.”