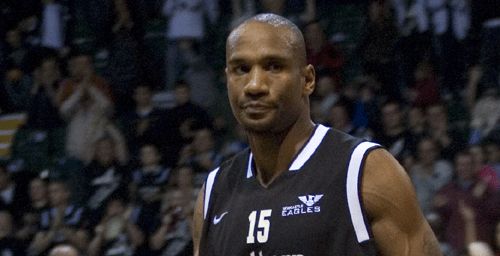 Lynard Stewart, of the Newcastle Eagles, has won the Molten Player of the Season award to add to the collection of medals that he has picked up this season.

The 6’8″ centre, who joined the Eagles from Euphony Bree in Belgium over the summer, has been inspirational in their memorable run to the BBL Championship title and also featured prominently in their BBL Cup and Trophy final defeats.

During the crucial run-in to the regular season, and of particular note, he posted double-doubles in seven consecutive games between 12th March and the day that they won the title on 6th April. Over their Championship-winning weekend, he had an awesome 27 points and 20 rebounds against the Everton Tigers, and followed that up with 20 points and 12 rebounds as they secured the title on the Guildford Heat’s floor with a 101-108 overtime win.

On the season, Stewart averaged 15.76 points and 8.61 rebounds per game, ranking him fifth in the league in the latter category. He led the BBL in field goal percentage at 67.9% and was also eighth in blocked shots with 1.1 per game.

It has been an amazing return to the BBL, after one year’s absence, for the man who has won his second BBL Championship, is looking to win his second playoff title this weekend, and has also previously won the BBL Cup. This is his sixth season in the league after previous spells with the Sheffield Sharks and London Towers.

The Molten Player of the Season award is voted for by the BBL Head Coaches, and seven voted him as their top player, combined with high scores from the others, as the Pennsylvanian won it at a canter from the league’s leading scorer, Anthony Paez. It is the first time that he has won Player of the Season, and his fourth appearance on an end-of-season All-Star team.

Stewart will be presented with his award on court at the BBL Finals Weekend, taking place at the National Indoor Arena this Saturday 3rd / Sunday 4th May.