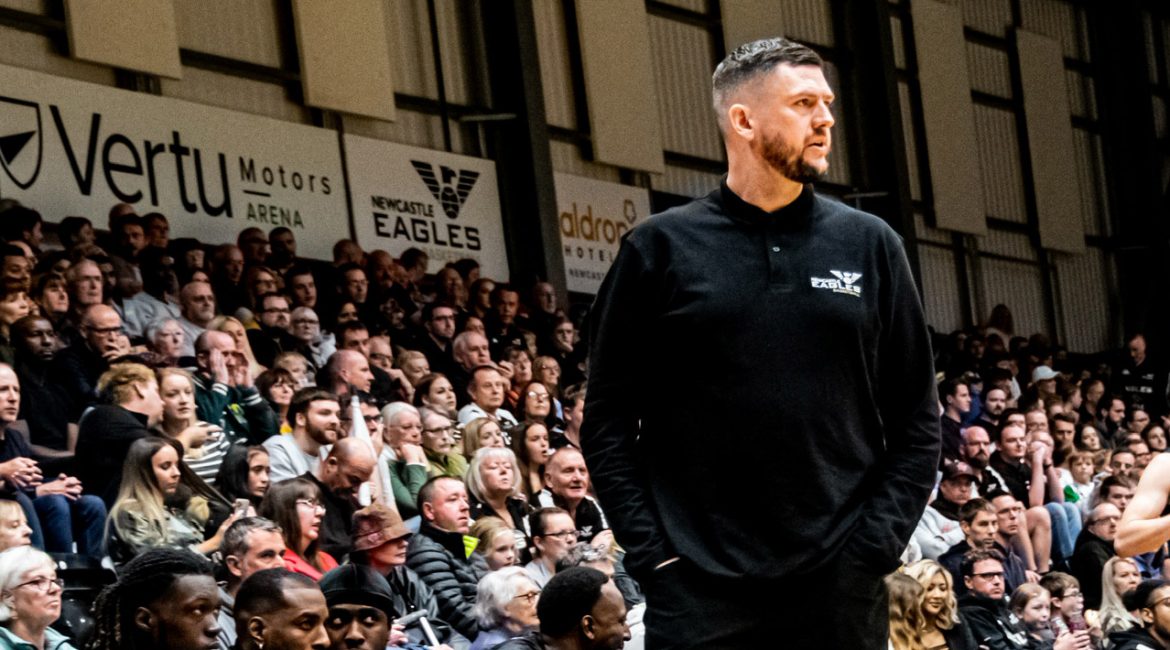 Stability is the key for Marc Steutel as Newcastle Eagles’ head coach prepares to consign an unsettling period of flux to the history books.

Donovan Johnson represents the penultimate piece in a puzzle that’s proved tough to solve during the first few weeks of an unexpectedly challenging roster-wide reset.

And after the US star touched down on Tyneside on Monday, coach Steutel revealed he plans to make one final move before doubling down on Newcastle’s new identity.

“We’ve lost an energetic British forward in Rowell Graham-Bell and there aren’t many like-for-like replacements out there.

“But we always intended to go nine deep with senior players and to be able to develop Sam (Mamuini) and Sauveur (Kande) within that group.

“That’s still the goal but we have to be sure that we sign the right player and the right person to bridge that gap.”

Graham-Bell’s season-ending injury had a far-reaching effect on Steutel’s anticipated rebuild with Newcastle suddenly shorn of a future starter.

What followed was a series of tough decisions, early exits and key arrivals as Eagles’ bosses effectively returned to the drawing board and built again.

And the return of Duke Shelton has helped to bridge the gap between the Darius Defoe era and Newcastle’s short-term future.

“Everyone knows it’s been a fragmented start to the season,” added Steutel.

“It’s not something that I’m particularly proud of but when you’re hitting a complete reset there are no guarantees.

“I was always coming into this job with a blank canvas and understanding the player and the person is a big part of this job.

“I think I’m starting to reach that point now and I’m looking forward to a more settled period ahead.”

Cohn and Varner have been forced to grow into their roles in the full glare of competitive BBL action.

But both players continue to impress after shrugging off the lack of a pre-season and pitching in where coach Steutel needs them most.

The pair played a pivotal part in Sunday’s BBL Cup win at Plymouth with Cohn earning a place in this week’s BBL All Star 5 on the back of an all-action MVP display.

“David and Lesley have settled in very well and very quickly,” added Steutel. “We needed that.

“David hadn’t played a competitive game for six months when he suited up against Manchester but straight away you could see what a high level his basketball IQ is.

“David and Lesley are still finding a way to fit into this team and, to an extent, it’s the same for Duke.

“He’s been here a little longer but he’s surrounded by a completely different group of players from last season.

“It’s just about us settling down as a group and understanding who we are.

“As a coach I’m finding out what each player’s strengths are and that’s the exciting bit for me.

“I think there have been glimpses of who we are in the last couple of games and I see a lot more of that every day in practice.”

Friday’s live TV test at Sheffield Sharks is next up for a Newcastle team rooted to the bottom of the BBL Championship table.

Like the Eagles, Atiba Lyons’ men won for the first time last weekend — an impressive defensive display sentencing Cheshire Phoenix to a 62-49 loss.

And two bitter rivals will be determined to build on the momentum gained from much-needed wins on the road.

“Coach Lyons has done an awesome job in the BBL,” added Steutel.

“He’s created a level of consistency with the Sharks and I know that his teams will compete and work hard.

“Sheffield has a clear identity and that’s something this new Newcastle team doesn’t have just yet.

“Results-wise the Sharks didn’t have the strongest of starts to the season but they still have that identity. It counts for a lot.

“When you watch their games it’s clear that identity is still at the heart of everything positive that they do.

“We’re well aware of how important that can be and how together they are as an organisation.

“This might be a new Eagles roster but this is an historic fixture and whoever is out there on court, Newcastle versus Sheffield will always have an edge to it.

“On Friday you’ll see two hungry teams who’ve finally got the monkey off their backs and will be looking to win back-to-back games.”