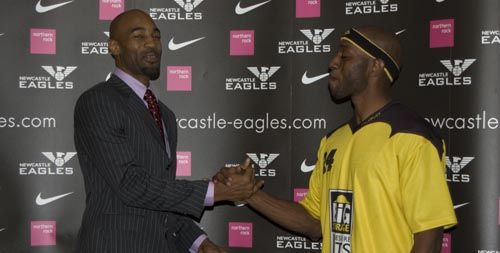 EAGLES icon TJ Walker has claimed the current crop of stars at Newcastle have the potential to be the greatest team ever assembled by the club.

Speaking exclusively to the Chronicle, the legendary Walker, who captained the Eagles in their famous 2005-06 “Clean Swoop” season when they won every BBL trophy on offer, believes this side can go on to great things.

“I told people at the club months ago when this current team was put together that they can be the best overall team that Fab has ever assembled,” insisted Walker.

“It will take a little time, but once they all get on the same page, they can go as far as want.

“When we swept everything that year, we had a young Darius Defoe and a young Andrew Bridge, but those guys are now at another level.

“You then add in what Fab and Paul have added, with the likes of Reggie Jackson, Trey Moore and now Andrew Sullivan, and you have to think that they are more than capable of running a couple of months at some time during the season without losing.”

The man who had his famous No 5 vest retired in his honour is still an avid fan of the Eagles and, from his base in California, he keeps tabs on what is happening.

“The first game against Guildford was a nail-biter but I was following the updates live as they happened on the internet,” he said.

“I still love the club and the fans, and I am even trying to get over there in the next month or two before our season starts.

“I am even looking forward to the next Eagles game, which I guess is a bit crazy with me being on the other half the world.”

Walker would certainly get a rapturous reception if he did return to Tyneside, while the season he refers to is his new venture as player coach of the Modesto Bearcats.

A relatively new team in his hometown, he has come out of retirement to play again and achieved his dream of the coaching job that he has always wanted close to his family.

Walker has also been finalising moves to become not only a player and coach but also the owner of the club – something that the Eagles’ next opponents Milton Keynes have plenty of experience of.

For while few would want to see Vince Macaulay treading the boards on the court for the Lions to complete the hat-trick like Walker, he is the only owner-coach in British basketball, and in that role picked up the BBL Coach of the Year award last season.

Consequently, the Eagles will face their usual tough trip to Bletchley as they bid to remain undefeated in the league and keep one particular long-distance fan in California very happy indeed.