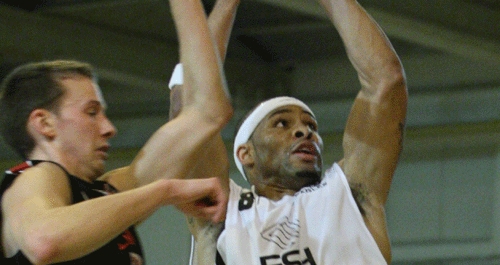 Newcastle Eagles thought they had one foot in the BBL Cup Final after a first half blitz initially poured cold water on the recent red-hot form of their hosts but Riders came back from the dead with a similarly spectacular second half display to claim a 90-90 tie.

In a classic game of two halves, Eagles were up by as many as 21 points until the home team launched their superb revival after returning from the locker rooms looking to salvage their Cup hopes which were looking decidedly dodgy at one point.

Having destroyed UCP Marjon Plymouth Raiders at Sport Central on Friday night in the league, the Eagles picked up where they left off with a seamless transition into this game. They showed the same level of intensity at both ends of the floor to leave their stunned hosts trailing in their wake.

Defensively they were sensational during the first half and completely locked down the dangerous trio of Cameron Rundles, Ayron Hardy and most importantly, former favourite Drew Sullivan.

While Hardy grabbed the first score of the contest, it certainly wasn’t a sign of things to come as Fab Flournoy and his team subsequently stormed into an early double digit lead at 23-13 after a steal and lay-up by Paul Gause.

The visitors increased the lead to 28-15 by the end of the first quarter but unfortunately for a the majority of fans inside a packed John Sandford Sports Centre, even worse was to follow.
The home side just couldn’t cope with the swarming defence from the Eagles and consequently they found themselves staring down the barrel early in the tie as Darius Defoe made a statement basket to double Riders tally at 42-21.

Not allowing Sullivan any looks at the basket, the Great Britain captain who is so often an immeasurable force of good for Riders was nullified to great effect by his former employers and went scoreless in the first half .

Despite this setback, the home team did rally slightly with the fantastic Bradd Wierzbicki (pictured) helping to stem the tide with 18 first half-points as the home team looked to limit the damage at 58-40 by the midway point of the game.

It made a big difference because when Riders emerged from the locker rooms they were like a team possessed and roared on by the home fans, they began a remarkable salvage operation which was every bit as impressive as the Eagles first half display.

Having cut the gap to just ten points at 65-55 during the third quarter it was in the final quarter when Riders really began to turn the screw and the once dominant Eagles began to crumble in spectacular fashion as they ran out of steam.

Looking hungry and hurt from their first half hammering, Riders were scintillating as they sensed blood and the ability to even take a lead into the second leg. With Brett Royster and Ayron Hardy lending great support to Wierzbicki, the home team completed their fight back by moving 88-86 in front before the teams eventually finished locked on 90-90.