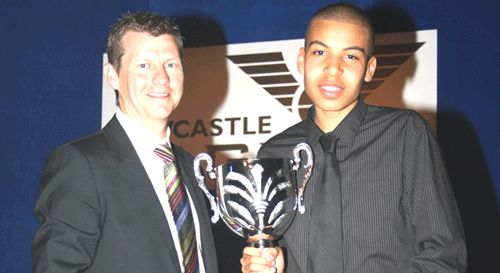 The Newcastle Eagles School of Excellence celebrated their first season in the Junior National League with an end of season celebration.

The event took place at the Holiday Inn Express, Newcastle. The event included the 3 National League age groups and the Girl’s U18 team which the club rescued after the team nearly folded. Players and family members from across the age groups enjoyed a buffet, disco, and presentations made by Newcastle Eagles Head Coach Fabulous Flournoy. All of the Newcastle Eagles senior team was on hand to give their support to the stars of the future. A special award was presented to Ross Wilson as the School of Excellence Player of Year. Ross played with the U15’s and also stepped up to join the U16’s. Currently in the England U16 programme Ross has also started training with the Newcastle Eagles senior squad. Other Award winners on the night;

The end of season celebration was followed very quickly by the preparation for the new season within the School of Excellence. Last season saw the whole programme start late so coaches were keen to get extra time with the players for this upcoming season. With the end of the season party taking place on the 4th April players were invited to try out for the 2008-9 season the following week. The coaching staff have rotated and new age groups have been added. The School of Excellence is going to extend to U12 with trials for this programme happening in the near future as well as extending on the female side to U14 and U12 under the direction of Female Development Officer Sarah Bennett. For further information contact 0191 245 3881.