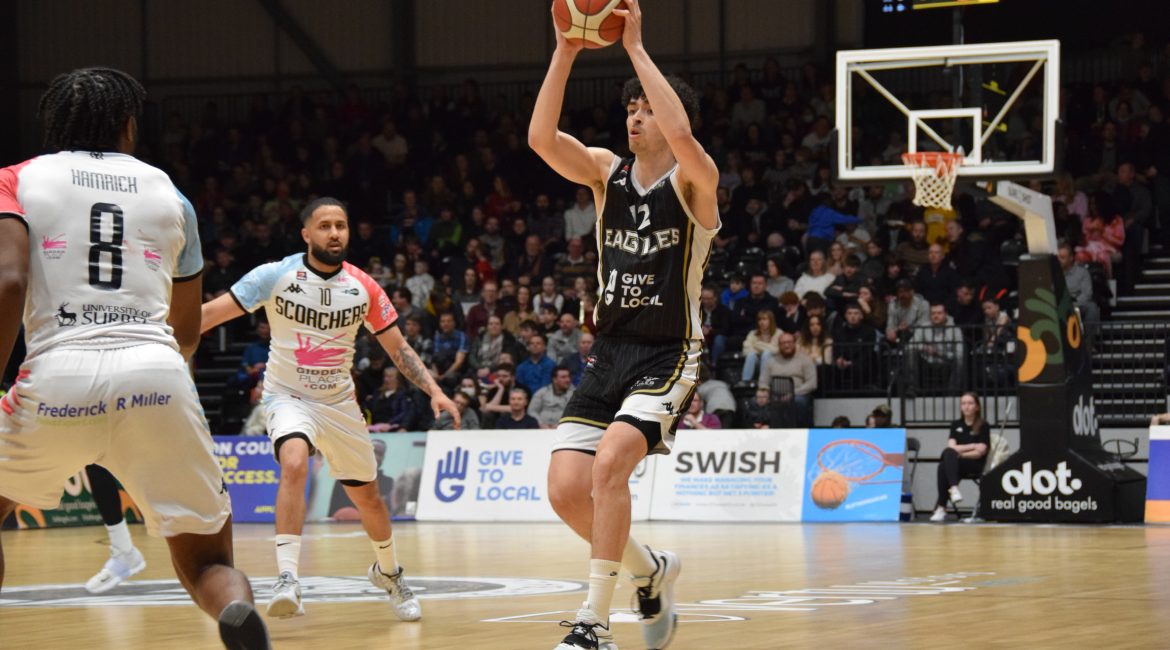 Livewire Louis Sayers is ready to ‘ramp things up’ against Glasgow Rocks following his winning return to the BBL.

Newcastle’s three-point threat bounced back from a six-week injury lay-off to play a key role in successive victories against Surrey and Glasgow.

And Sayers senses some much-needed momentum creeping into the Eagles camp ahead of tomorrow’s cross-border rematch with the Rocks.

“I felt good in my comeback game last week and again in Glasgow on Sunday,” said the versatile guard, who broke his foot in December.

“In short spurts it was fine but I did feel it in my lungs!

“Last weekend was all about limiting my minutes and not pushing too hard.

“But I feel like I can ramp it up and contribute more at key points of the game.

“It seems as if our season is suddenly gathering some momentum and we’re picking up the pace.

“The thing about the last two wins is that they felt comfortable. You can sneak a game without every dominating.

“But the victories against Surrey and Glasgow were always comfortable and we looked confident as a team out there.”

The pair enjoyed a fruitful partnership during the Eagles’ double-winning 2020/21 campaign.

And Sayers has nothing but praise for all-action Gordon as the US forward eases his way back into the BBL groove.

“Justin’s slotted straight back in and looks like he’s never been away,” he added.

“There’s been no teething period and that’s one of the positives when you sign a player who knows his way around the club.

“Aside from the fact that Justin’s a great player, he’s a fantastic personality to have around the place.

“There’s much more to come from him. He’s returned to Newcastle but he’s still having to adapt to playing alongside some unfamiliar faces and in that respect he’s still finding his feet.

“It might take him a few more games to get back to his best but look at what he’s already brought to the floor.

“I just love playing with Justin. He attracts so much attention from the opposition and will always be top of the scouting report.

“That creates time and space for the rest of us and even if he’s not putting up the big numbers it’s huge for us having him on court.”

Newcastle leapt out of the blocks against the Rocks on Sunday before the hosts finally closed the gap to single figures down the stretch.

But the final scoreline belied an utterly dominant display from Ian MacLeod’s side as the men in black closed out an impressive win on the road.

“We started off really well and that first quarter set the tone,” added Sayers. “Glasgow made a push to get back into the game but that was to be expected.

“The Rocks have always been relentless at home and we were prepared for that.

“We know what to expect this week and we’ll make the necessary adjustments ahead of the return fixture.”

Tomorrow’s Vertu Motors Arena showdown — live on Sky Sports — is a sell-out with Newcastle keen to make a statement ahead of next week’s international break.

And Sayers can’t hide his joy at being back in the mix after a soul-searching spell on the sidelines.

“It’s been frustrating and more so after the first couple of weeks,” he added. “I was in my boot but there was no pain and it felt like I was ready to get back out there much sooner.

“I’ve been watching the guys and keeping my head in the game — everything apart from playing.

“Practice went well last week and I didn’t feel as if I’d missed too much.

“I’ve had no adverse reaction to getting back out there so it’s time to take it to the next level.”